There are seven gateway stations to Tibet, as well as the added option of certain passengers being able to board at Xi’an in the low season for tourism. Since its opening in 2006, the option for rail travel to Tibetan plateau has been increasingly popular with tourists. For anyone traveling to Tibet by train from one of the eight available stations, this is one of the most exciting journeys in the world.

Also known as the Qingzang Railway, the highest railway in the world is the Qinghai Tibet Railway, which runs from Xining in Qinghai Province to Lhasa, in the TAR. This vast and expansive railway stretches for more than 1,956 km (1,215 miles), and reaches an altitude of 5,072 meters (16,640 feet) at the Tanggula Pass. The highest railway line in the world, the construction of this railway over two massive mountain ranges is an amazing feat of engineering that took almost 25 years to complete. 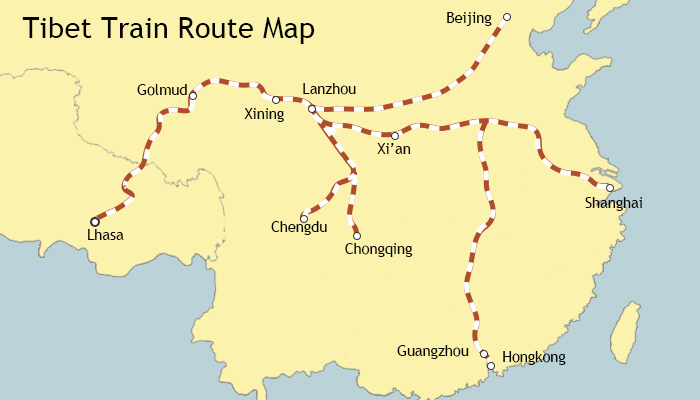 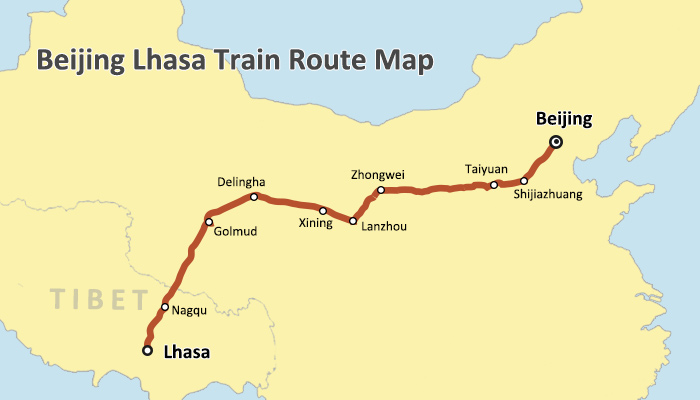 Starting in Beijing, the route heads through Hebei, Shanxi, Shaanxi, Ningxia, Gansu, and Qinghai. The trains stop at several major stations in China, before heading to Xining and up onto the plateau. The main stations are at Shijiazhuang, Taiyuan, Zhongwei, Lanzhou, and Xining.

Stretching for 3,757 kilometers across most of China, this awesome route from the eastern coast to the highest capital is a trip that takes around 40 hours, and encompasses three days.

Another of the longest routes to Tibet, the trains from Shanghai to Lhasa are among the more popular routes to the plateau. Starting from one of China’s most important cities, not to mention one of the biggest tourist locations in China, this awesome trip to Lhasa crosses 6 provinces to reach the Tibetan plateau, though it actually runs into and out of Jiangsu Province twice. 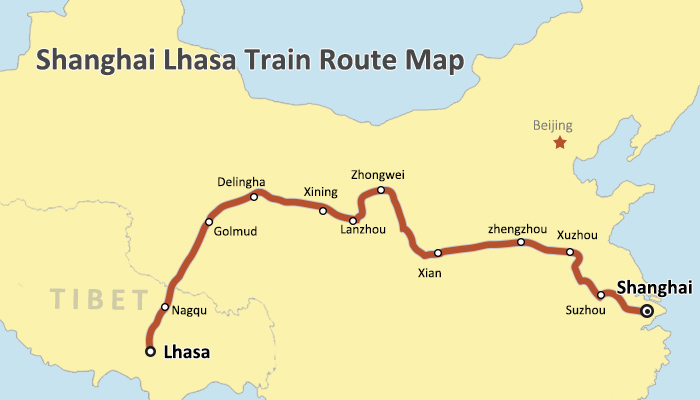 Starting from Shanghai, the route passes through Jiangsu, Anhui, Henan, Shaanxi, Gansu, and Qinghai, before heading up to the plateau and crossing the Tanggula Mountains into the TAR. The main stations along the route to the plateau are Wuxi, Suzhou, Nanjing, Bengbu, Xuzhou, Zhengzhou, Xi’an, Lanzhou, and Xining.

The route stretches for 4,373 kilometers across China, and the trains take around 47-48 hours to reach Lhasa, encompassing three days.

The single longest route to Tibet, not to mention the route that has the longest travel time, trains from Guangzhou to Lhasa may not be as popular as some, but are an awesome trip to the plateau that crosses eight provinces as it winds its way around in a large loop to reach the Tibetan plateau capital. 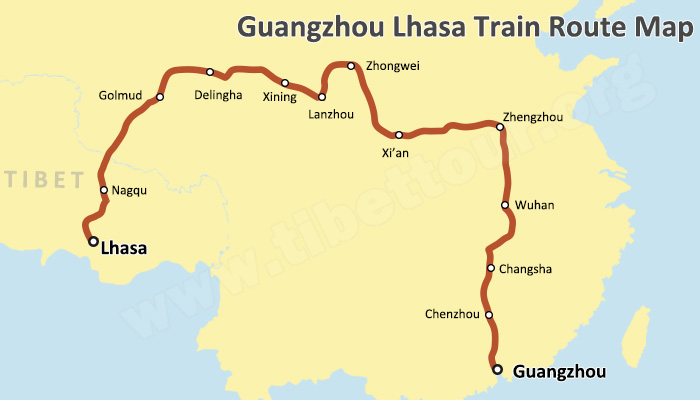 The train passes through the Chinese provinces of Guangdong, Hunan, Hubei, Henan, Shaanxi, Ningxia, Gansu, and Xining. Along the route, the major stations include Chenzhou, Changsha, Wuchang, Zhengzhou, Xi’an, Lanzhou, and Xining, crossing onto the plateau after Golmud, and spanning the vast Tanggula Mountains to reach northern Tibet and down to Lhasa.

The route from Guangzhou to Lhasa, running in a large loop that heads north before moving west, covers a distance of around 4,980 kilometers. The trip takes around 52-54 hours, and encompasses three days in this epic train journey.

While the route from Chengdu to Lhasa may not be the shortest of the seven, it is one of the most popular, thanks to the attractions of the area that bring many tourists to Chengdu before heading on to Tibet. Shorter than the routes from the east of China, the route from Sichuan’s capital crosses just three provinces on its way to the Tibet Autonomous Region. 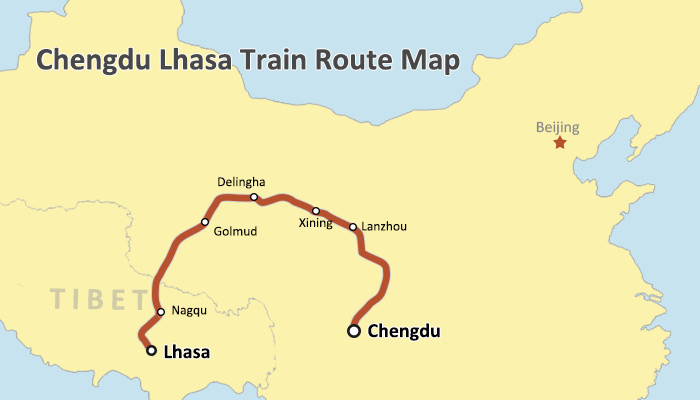 Starting in Chengdu, the route takes you through more than half of Sichuan Province, and up into Gansu, where it bends northwest to head into Qinghai Province. From there, the route heads on up to the plateau and Lhasa. Starting in Chengdu, the train stops at the major stations of Guangyuan, Lanzhou, and Xining, before joining the Qingzang Railway.

The route to Tibet from Chengdu stretches for 3,070 kilometers through China and the TAR, and takes around 36-37 hours to reach Lhasa. Covering three days, this route departs in the evening and arrives in Lhasa in the morning of the third day.

A center of trade in the mountains of Western China, Chongqing is a metropolitan city that has seen an increase in passenger popularity on its trains to Lhasa. The route crosses three provinces to reach the plateau region, including Sichuan, Gansu, and Qinghai. 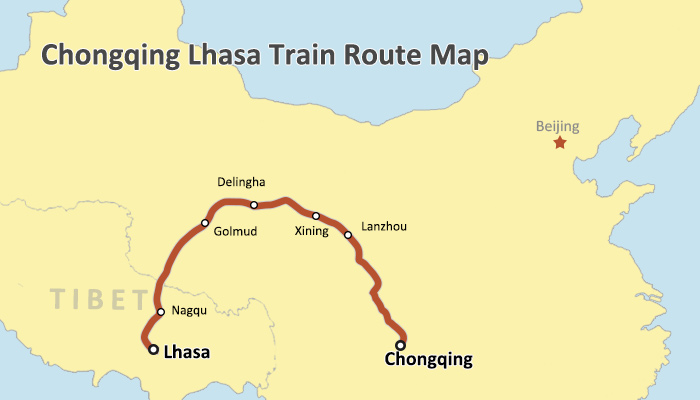 The train from Chongqing takes around 35 hours to reach the Tibetan capital of Lhasa, encompassing three days on this much shorter route. Covering a distance of 3,030 kilometers, the trains reach Lhasa in the early morning of the third day of travel.

Following only the route of the Qinghai Tibet Railway, the route from Xining to Lhasa is the shortest of all the route to the Tibetan capital. However, this is also the most spectacular trip of all, as you are able to take in the section of the route that runs down across the plateau from the Tanggula Mountains in daylight. 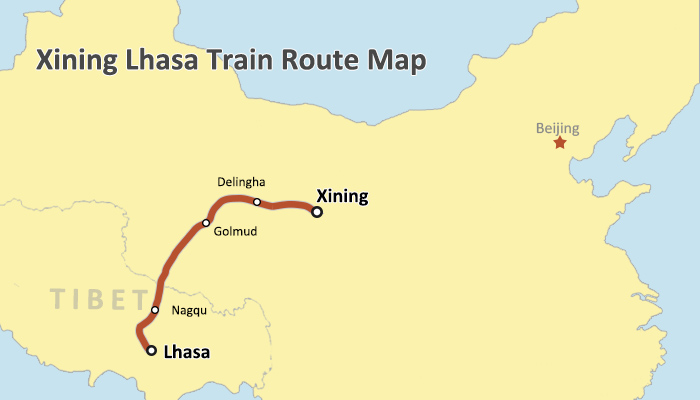 The route heads out of Xining, passing by the vast Qinghai Lake, and heading for Delingha, and then on to Golmud. From Golmud, the train heads up on its climb to the plateau, stopping at Amdo and Damxung Train Stations before reaching Lhasa.

The route to Lhasa from Xining covers a distance of just 1,972 kilometers, and takes a little over 21 hours to reach the Tibetan capital. However, while this is less than a single day, the journey actually encompasses two days of traveling.

The second shortest journey to Lhasa, all trains pass through Lanzhou to get to Xining and the Tibetan plateau. Lying in Gansu Province, the route from Lanzhou crosses just two separate provinces to reach Lhasa, which includes Gansu and Qinghai Provinces. 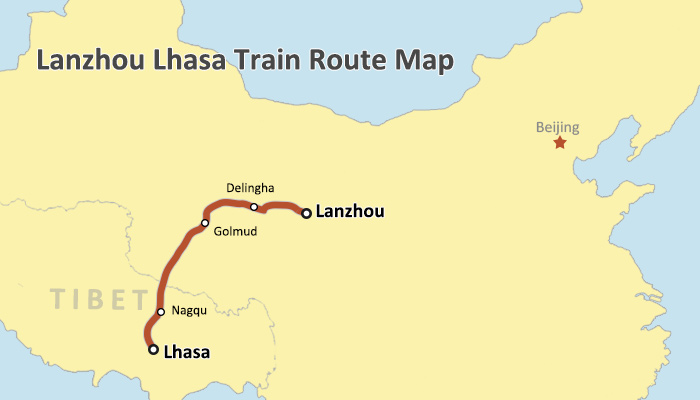 The train passes through only small local station on its short journey to Xining, where it joins the Qingzang Railway to Lhasa. Covering a distance of around 2,188 kilometers, a little more than 200 kilometers longer than the Qingzang Railway itself, the trains take around 23-24 hours to travel between Lanzhou and Lhasa. Departing in the morning, the train arrives in Lhasa in the late morning of the following day. 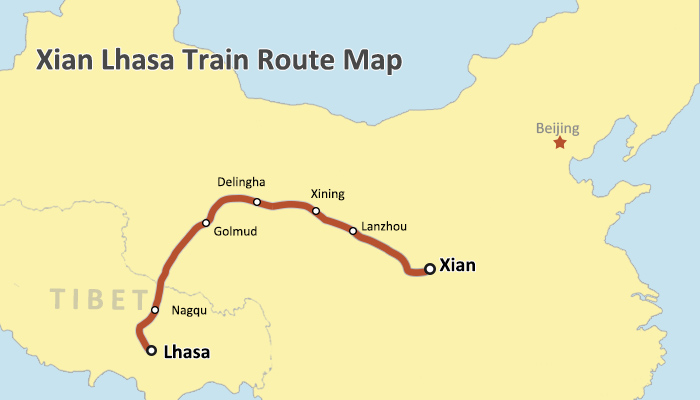 The option for tickets from Xi’an is open all year round, but with most of the trains from Guangzhou and Shanghai being full in the peak season, you are unlikely to be able to board from Xi’an to get to Lhasa in the summer months. From Xi’an, the train passes through Lanzhou and Xining on its way to Lhasa.

A relatively short trip of just 2,864 kilometers, the route between Xi’an and Lhasa takes around 30 to 32 hours, depending on which way you are traveling. The trains encompass two days, arriving in Lhasa in the afternoon of the second day.

The trains to Tibet are becoming more and more popular with tourists to the region, and with eight stations to choose from, you can get an amazing view of the landscapes and scenery of both mainland China and Tibet as you pass across the country to reach the highest capital city in the world. Each route has its own merits and stunning scenery through mainland China, and all the trains give you the awesome views of the northern areas of Tibet, which are not available to those flying to the TAR. So if you are planning a trip to Tibet, take the train and enjoy the best experience of traveling to the Roof of the World.

Be the First One to Comment "Tibet Train Map"