Running since 2006, when the famous Qinghai Tibet railway first opened, the trains to Tibet have become one of the most popular ways to travel to Tibet from mainland China. Trains depart from seven gateway stations across China, including Beijing, Shanghai, Guangzhou, Chengdu, Chongqing, Lanzhou, and Xining. And for those stopping in Xi’an first, you can sometimes get on one of two trains that pass through this historic city. With such a wide choice of trains to Tibet, you can enjoy the scenery of both China and Tibet as you travel in style along the Qinghai Tibet Railway to the roof of the world.

The train from Beijing to Lhasa departs daily, leaving Beijing West Railway Station at around 8:10pm and arriving in Lhasa at around 1:27pm on the third day after departure. Taking around 41 hours to reach the Tibetan capital from the Chinese capital city in the east of the country, this epic adventure covers eight provinces of China and stretches for more than 3,700 kilometers. The return trip from Lhasa to Beijing actually takes a little less time, as the train does not have to struggle up the incline to the plateau and can move a little faster. Departures from Lhasa leave in the mid-afternoon and arrive in Beijing in the morning of the third day. 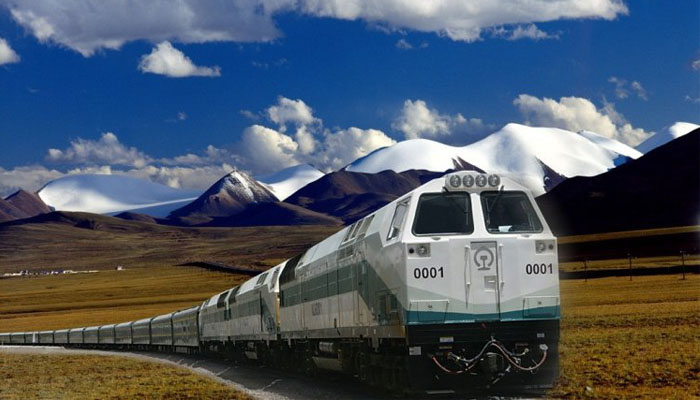 The train from Shanghai to Lhasa run daily from the Shanghai Railway Station, and takes over 46 hours to reach the Tibetan plateau capital. The trains depart at around 7:16pm daily, and arrive in Lhasa at around 5:55pm on the third day after departure. Covering a distance of 4,373 kilometers, the trains take around 46 hours 39 minutes to make the long journey across the breadth of China. Return departures from Lhasa leave the Lhasa Railway Station at around 11:35 in the morning, and arrive in Shanghai at around 11:28am on the third day, taking 47 hours and 53 minutes to cross the country to the eastern shores.

The train from Guangzhou to Lhasa depart from the Guangzhou Railway Station daily at around 11:44am, and arrive in the Tibetan capital railway station at around 4:25pm on the third day after departure. The longest of all the train journeys to Tibet, the trains from Guangzhou take around 52 hours 41 minutes to reach the Tibetan capital. The return trip departs from Lhasa just after lunch, and arrives back in Guangzhou at around 7:50pm on the third day. The return trip is slightly longer, taking around 54 hours 50 minutes to cross China to the southern coastal city in Guangdong Province. At 4,980 kilometers, this is the longest single train journey in China.

The train to Lhasa from Chengdu are one of the most popular of all the seven gateway cities to Tibet, and depart every other day. The departures are done on even days in six months of the year and odd days for the other six months, and depart from the Chengdu North Railway Station at 8:45pm, arriving in Lhasa at around 1:56pm on the third day after departure. The trains cross a distance of around 3,070 kilometers, and take around 41 hours 11 minutes to reach the Tibetan plateau capital. The return journey departs Lhasa at around 11:05am every other day, and arrives in Chengdu in the morning of the third day. The return journey takes around 45 hours 11 minutes to reach the Sichuan provincial capital.

The train from Chongqing are also considerably popular with tourists to Tibet, and depart from the Chongqing North Railway Station every other day, with a similar schedule style to that of Chengdu. Trains depart from Chengdu at 8:28pm and arrive in Lhasa at around 1:56pm on the third day after departure. The train from Chongqing takes around 41 hours 28 minutes to cover the 3,030 kilometers to the plateau. The return journey from Lhasa to Chongqing departs mid-morning, and arrives in Chongqing in the morning of the third day, taking around 45 hours 8 minutes to reach Chongqing.

The train to Lhasa from Lanzhou in Gansu Province of China depart every other day from the Lanzhou Railway Station, taking just 24 hours and 13 minutes to reach the Tibetan capital railway station. Trains depart at 12:17pm and arrive in Lhasa at around 12:30pm the following day, making Lanzhou one of the shortest trips to Lhasa of all the seven trains. The return train from Lhasa departs at around 9:40am every other day, and arrives in Lanzhou around 24 hours 34 minutes later, covering a distance of around 2,188 kilometers.

Xining is the start of the famous Qinghai Tibet Railway, and is the shortest of all the train journeys to Lhasa from mainland China. Located in Qinghai Province, Xining is the closest departure station to Lhasa, stretching a distance of only 1,972 kilometers to the Tibetan capital’s railway station, by the Lhasa River. Trains depart from Xining at around 3:02pm every other day (though sometimes daily in the peak months), and arrive in Lhasa at 12:30pm the following day, taking just 21 hours 28 minutes to reach the Tibetan capital. The return trip departs from Lhasa at 9:40am, and arrives in Xining at 7:15am the following day, taking around 21 hours 35 minutes.

While there is no direct train from Xi’an in Shaanxi Province to Lhasa in the TAR, there is an option to board one of the trains from Guangzhou or Shanghai to reach the plateau region. Trains from Shanghai and Guangzhou pass through Xi’an on the way to Tibet, and stop at the station for boarding for passengers with tickets from Xi’an to Lhasa. However, this is only an option that is available in the low season months for Tibetan tourism, which are normally from December to March. Trains depart at either 9:45am daily for the Z264 route from Guangzhou and 11:24am daily for the Z164 route from Shanghai. The journey to Lhasa from Xi’an takes from 30 hours 34 minutes to 31 hours 1 minute, and cover a distance of around 2,864 kilometers.

The return trains to Xi’an depart from Lhasa at the same times as the Shanghai and Guangzhou trains, with the Z166 to Xi’an and Shanghai departing at 11:35am and the Z266, which passes through Xi’an en route to Guangzhou departing at around 1:00pm daily.

With seven different departure gateways to Tibet from mainland China, taking the train can be the best option for getting to Tibet for many international and domestic tourists. Taking the train is not just cheaper, but also more exciting and adventurous. To make it easier for you, we can also help you with Tibet train ticket booking. If we book your tickets for you, you simply need to pick them up from the ticket office in your chosen departure station, using your passport and Tibet Travel Permit as proof of identity and being on a pre-arranged tour of Tibet.

Be the First One to Comment "Tibet Train Schedule and Timetable"