Tibet manners and travel tips are always necessary to be gotten before starting your Tibet trip. Tibetans have different ways of behavior in many aspects due to unique Tibetan culture and Tibet religion. Although the local Tibetans are friendly and easy to get along with, it is suggested to follow their custom and avoid the taboos to make our travel more pleasant and also show our full respect to local Tibetan people. Here are some tips for your reference: 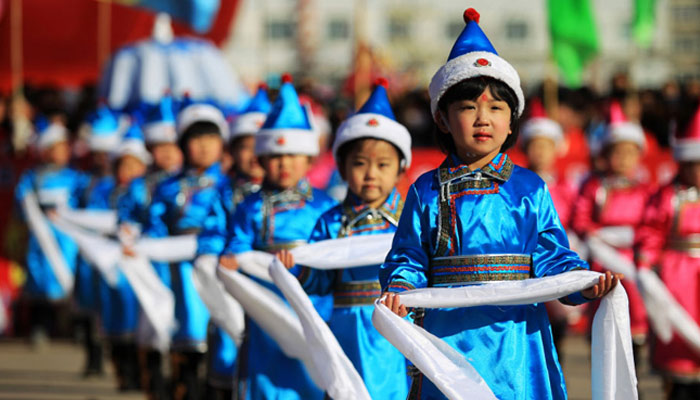 Tibetan Hada is a special gift from Tibetans to express their greeting to tourists.

It’s good to have some knowledge about Tibetan etiquettes and taboos beforehand. And be sure to respect local customs and be polite. Travel advice on life in Tibet as follow:

1) Do not step on threshold when you enter a house or a tent.

2) Add "la" after the name for politeness when you call or address somebody by name. It’s an equivalent of "Mr." or "Sir" and “madam”.

3) Cross your legs rather than stretch your legs towards others when you are asked to sit down.

5) Do not clap your palms and spit behind the Tibetan people. Tibetan people stretch out their tongue to greet you. It's also a courtesy to put their hands palm to palm in front of the chest.

7) Dress responsibly. Short skirts and shorts are not a suitable option, especially at religious sites. Wearing shorts in Tibet (even when trekking) is akin to walking around with ‘TOURIST!’ tattooed on your forehead.

8) Don’t bargain with locals if you do not want to buy something.

9) Don’t put your shoulder casually on the local Tibetan or touch their head even if you have become friends.

10) Don’t say any unlucky words or curse in a Tibetan home.

11) Don’t buy any fur from any wild animals, horns of wild Tibetan antelopes, skulls of wild yaks, etc. to help rescuing the wild animals and if you are found carrying these items when you leave Tibet, you are likely to get great trouble.

12) Don’t cross the Tibetans' knives, fans, horse reins and saddles at will.

13) Behave well. Since more and more tourists are going to Tibet, more and more Tibetan people get used of seeing the "Big Noses" (western people) with jeans, sunglasses and some of them with shorts, the above rules are not obeyed so strictly as before. But we still suggest you take the above advice.

14) Don’t whistle at night, it is believed it will bring ghosts and elves.

15) Never throw bones in the fire. Because Tibetans believe that fire is something to the god.

Here we also provide you with a few commonly used Tibetan languages for the occasional need (transliteration in the front, meaning in the back): Tashi Delek-everything goes on well; Ajia-Big Sister (for older women); Tujiqi-thank you; Quanta-sorry; Minkare-what is your name; Midu-no (if a child asks you for money, you can say: Midu).

Do’s and Don’ts When Visiting Attraction Sites in Tibet

Many places we are visiting in Tibet is the holy or sacred lakes, mountains, temples or monasteries to the locals. So better to follow their way and avoid problems when visiting attraction sites in Tibet.

1) Do go around clockwise when encountering monasteries and pagodas. At present, most temples and monasteries that we are visiting in Tibet are Tibetan Buddhist temples. According to Tibetan Buddhism, we must walk in a clockwise direction when turning around and never walk in a counterclockwise direction. In the Bon temples, which is opposite, we need to walk counterclockwise.

2) Don’t smoke, touch, or point your figure at the buddha statues, turn over the scriptures, ring the bell or drums when visiting a temple or monastery. Don’t touch the religious objects such as amulets, rosary beads, etc. from the lamas. It is also forbidden to touch the scriptures by hand in the hall.

3) Don’t cross the religious implements and brazier when visiting a temple or monastery and don’t cross the hanging prayer flag when you climb the mountain in Tibet.

4) Don’t take pictures or videos without permission in the temple or monastery. 5) Do be quiet in the temple and keep your body upright when seated. Don’t sit on the seat of a living Buddha.

6) Do be quiet when crossing the snow copped mountains and passing the lake.

8) Don’t be noisy in or near a temple and monastery.

9) Don’t eat garlic before visiting the temple or monastery. There’s a saying "Even if the temple is on fire, don't let people who eat garlic enter the temple." Let’s follow the locals’ religious custom.

11) Do ask price and permission if you would like to take a photo with cattle, sheep, horse, dog, or even with a stone tablet, local people or children at the attraction sites. Most of them will be charged. If you don't want to take a photo with them, do not aim them at the lens.

12) Don't drive or hurt cattle and sheep at will when you see them with red, yellow, and green cloth in the countryside. It is a sacrifice to worship the gods.

13) Do not drive eagles away or injure them for they are the sacred birds of Tibetan people. On the outskirts, you should not drive or disturb the sheep or cows with green, red and yellow cloth strips on.

Do’s and Don’ts When Dining in Tibet

With the influence of the environment and cultural background, all aspects of the Tibetan diet, such as etiquette, customs, taboos, etc., have their own characteristics. For example, since ancient times, Tibetans have had the etiquette of eating according to their identities and positions. Whether it is a large banquet or a small family dinner, we may follow the traditions.

Senior people and guests come first to seat; young kids are taken good care of. It is often the seniors and guests who eat first, followed the other family members. Everyone toasted with each other and enjoy the food in a happy atmosphere. Tea drinking is also similar: senior and guests come first.

Most Tibetan people believe in Buddhism, so dinning culture is also deeply influenced by religion. Tibetan Buddhism believes that the 8th, 15th, and 30th of the Tibetan calendar are auspicious days. Every auspicious day or major religious holiday, many people do not eat blood or meat, but vegetarian food. Here are some more details for your reference:

1) Don’t visit a Tibetan just after eating, you may go either some time before or after the meal.

3) Don’t cross over the cooking equipment or food when some Tibetans would like to be seated on the ground.

4) Don't stuff your mouth fully and make noises when you eat.

5) Don't invert the bowl. Don’t add or pour water with your backhand, it is only for the dead.

6) Drinking manner. When the host presents you a cup of wine, before you start sipping, you should dip your ring finger in the wine and flick the wine into the sky, in the air and to the ground to express your respect to the heaven, the earth and the ancestors respectively. After you take the first sip, the host would like to fill up the cup again and you will take another sip. If the host fills your cup with wine again, then you should bottom it up.

7) Respect their dietary habit. Tibetan people don't eat horse, donkey and dog meat and in some areas fish, too.

Do’s and Don’ts When Visiting Temples in Tibet

Buddhist monastery and Tibetan temple extend a warm welcome to foreign guests and in remote areas will often offer a place to stay for the night. Please maintain this good faith by observing the following courtesies:

3) Refrain from taking photos during a prayer meeting. At other times always ask permission to take photos, especially when using a flash. The larger monasteries charge photography fees, though some monks will allow you to take a quick picture for free. If they won’t, there’s no point getting angry; you don’t know what pressures they may be under.

4) Take your hat off when you go into a chapel (though there’s generally no need to remove your shoes).

5) No smoking inside the monasteries. It’s also banned to touch the statues of Buddha and religious articles and take pictures of.

6) Be aware that women are generally not allowed in protector chapels (gonkhang); always ask before entering.

7) Do not use paper with scriptures for toilet paper or wiping things.

All these Dos and Don’ts reveals the local history and custom. No matter it is for environment protection, personal blessing, or religious beliefs, following these manners will ensure you a more pleasant travel experience in Tibet. If you still have any questions about travelling to Tibet, please contact us for inquiries.