Situated at an average altitude of over 3,650m, Tibet, the roof of the world, always seems mysterious and unapproachable. How to get to Tibet was once a headache for tourists. Luckily, thank to advanced science and high technology, how to go to Tibet has become much easier and more convenient than ever. No matter where you come from, there are three major means of transportation for your Tibet travel. You can fly to Tibet, enter Tibet by train or overland to Tibet. 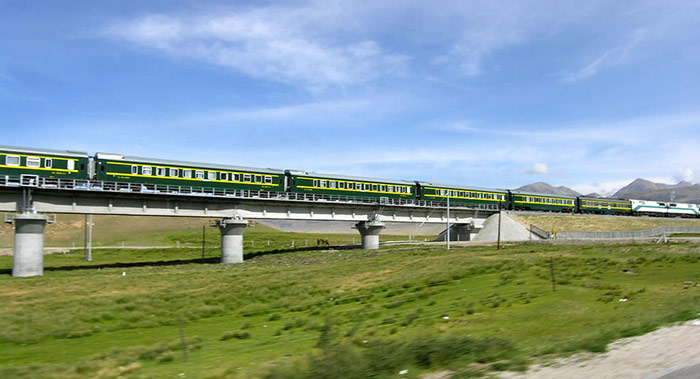 Among all the ways to get to Tibet, entering Tibet by train through the Qinghai-Tibet railway is the most attractive way to go.

Travel to Tibet by Trains

Reputed as an engineering miracle in the world, Qinghai-Tibet Railway (with the length of 1.956km ) itself draws millions of tourists at home and abroad to experience this wonderful Tibet train journey. What you need to do is just indulge yourself in Tibetan highland scenery, varying from stunning lakes, various wildlife to endless grassland and majestic snow mountains.

You can take train to Tibet from Beijing, Shanghai, Guangzhou, Chengdu, Chongqing, Lanzhou and Xining. Daily trains to Tibet would depart from Beijing, Shanghai and Guangzhou, while trains to Tibet from Chengdu, Chongqing, Lanzhou and Xining would run every other day. Only three trains from Shanghai, Guangzhou and Chongqing to Tibet would stop over at Xi’an railway station.

Xining-Lhasa trains are highly recommended for Xining is the starting point of Qinghai-Tibet railway. Go to Xining first and then take train to Tibet is a smart decision so that you can save both time and energy while enjoying the essence of Tibet plateau. And it’s also a great chance to acclimate to high altitude gradually on the trains to Tibet.

Sometimes taking train to Tibet would be the cheapest way for visiting Tibet. Compared with flights to Tibet, Tibet trains could save you as much as 2/5 during Tibet slack season.

Travel tips:
1.You had better set some time for checking in and reach railway station one and a half hour ahead.
2.Considering the long distance and duration, soft sleeper is a wise choice.
3.Some changes would occur to Tibet train timetable and ticket price.

Travel to Tibet by Air

Get to Tibet by air is the fastest way for entering Tibet within 6 or 7 hours. And Gongkar airport is just about 60km away from Lhasa city. Thus, traveling Tibet by air has become the top choice for tourists who just have short vacation.

There are direct flights between Lhasa and Beijing, Shanghai, Guangzhou, Chengdu, Chongqing, Xining Xi’an, Kuming, Shangri-La, Chamdo and Kathmandu. During the low season (November to next April), you would get a good discount from airlines, especially flights from Chengdu to Lhasa. But no discount would happen to flights from Kathmandu to Lhasa.

In addition, there are some seasonal flights from Chengdu to Shigatse, Nyingchi and Ngari in Tibet.

There are more than 10 flights to/ from Tibet every day.

Travel tips:
1.Your passport and Chinese visa would be present to get boarding card and pass the security checking. It’s advisable to get to the airport two hours before departure.
2.It’s more likely to suffer from AMS for your body couldn’t get used to the dramatic altitude rise.
3.And if you still want to experience Qinghai-Tibet railway, take flight in and Tibet train out is another good try.

Travel to Tibet by Overland Driving 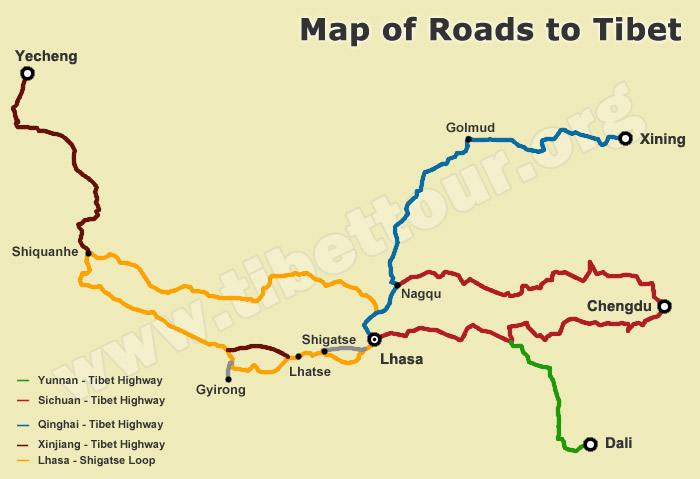 The first route is Sino-Nepal Highway, which is also known as Friendship Highway connecting Lhasa and Kathmandu together. Here you can visit sightseeing in Tibet, like Yamdrok Lake, Pelkor Chode Monastery, Tashilhunpo Monastery, etc. Everest Base Camp is a must go.

The second route is Qinghai-Tibet Highway, starting from Xining to Lhasa. It offers the shortest ride to Tibet in China and is considered as the safest highway. Various scenery outside the window would be a feast for your eyes, including Qarhan salt lake, Hu poplar woods, Tangula Mountain and Lake Namtso. 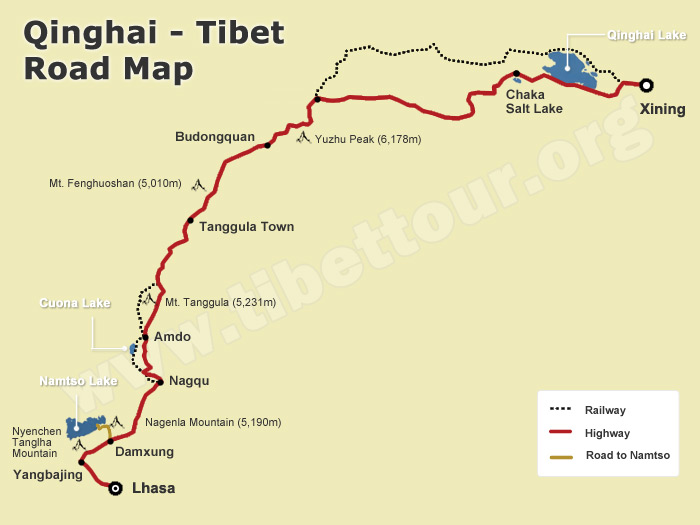 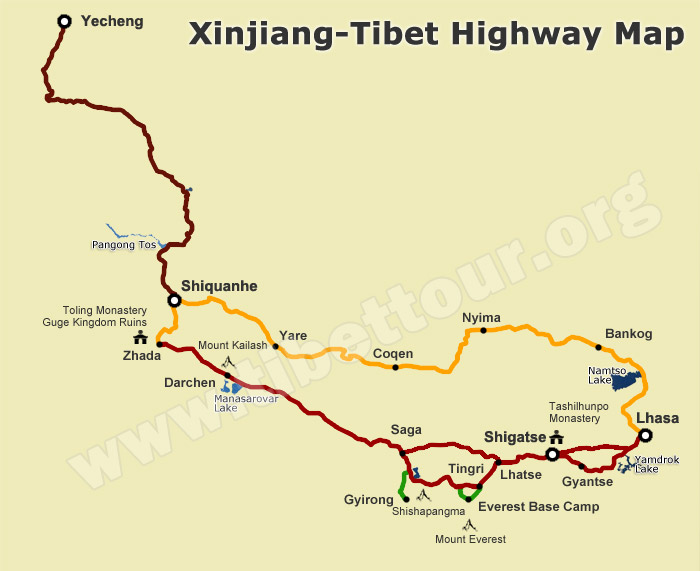 Travel to Tibet from Gateway Cites

Here we offer a chart of visiting Tibet from gateway cities for your reference. 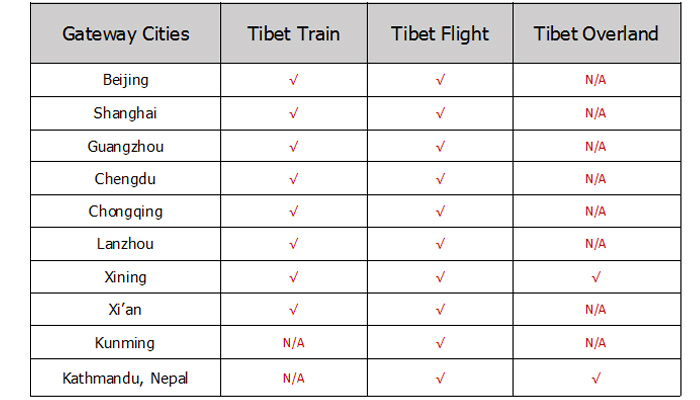 You can travel to Tibet from gateway cites via trains, flights and cars.

FAQ on How to Get to Tibet:

1. Any Tibet Travel Documents Required for Going to Tibet?

The Tibet Travel Permit issued by the Tibet Tourism Bureau must be obtained before Tibet tour starts. And Tibet permits needed vary with your destinations, such as Aliens’ Travel Permit for Everest Base Camp, Military Area Entry Permit for Mt.Kailash and so on. Here we are ready to help you apply all kinds of Tibet travel permits.

2. Any Direct International Flights to Tibet?

Our clients often ask us whether they can take direct flights to Tibet from US, UK, India and Singapore, etc. However, the only international flight to Tibet is from Kathmandu to Lhasa.

So, you can get to major big cities like Beijing,Shanghai and Chengdu, etc. and then take flights to Tibet as an alternative.

Be the First One to Comment "How to Get to Tibet"