What are the Most Sacred Mountains in Tibet?

When it comes to mountains, there is nowhere else in the world that can hold a candle to Tibet in terms of the sheer number of high mountains and the immensity of the mountain ranges that are found across the entire Tibetan plateau. The highest plateau in the world, Tibet is home to several of the world’s highest mountains, including Mount Everest, the highest peak on the planet. And it is not just the Himalayas that can be found in Tibet. There are also several ranges of the Transhimalaya that run across and along the plateau, several of which contain some of the most sacred mountains in the world.

All mountains are holy in Tibetan Buddhism, often believed to be the homes of the gods, and are held in high regard across the plateau and beyond to the Tibetan areas outside the TAR. However, there are several mountains in the Tibetan areas that are revered as sacred in Tibetan Buddhism, and are held in such high regard that even to walk on their slopes is considered to be sacrilege. Such sacred mountains include the famous Mount Kailash in western Tibet, Mount Namjagbarwa near the Tibetan capital of Lhasa, and Mount Kawagarbo in Yunnan Province.

Lying in the Gangdise Range of the Transhimalaya in western Tibet, Mount Kailash, also known as Kailasa, is the highest peak in the range and is considered to be the most sacred mountain in Tibetan Buddhism. Held as sacred in four religions – Hinduism, Buddhism, Jainism, and Bon – this unique pyramid-shaped mountain is considered to be the earthly representation of the legendary Mount Meru, the center of the universe. Sitting at an elevation of 6,638 meters, this sacred mountain may be the most revered, but due to its remote location, is also the least visited. At more than 1,220 kilometers from the Tibetan capital of Lhasa, getting to the mountain is a journey of at least five days of driving, and for Tibetans traveling on their sacred pilgrimage, this trip can take months. 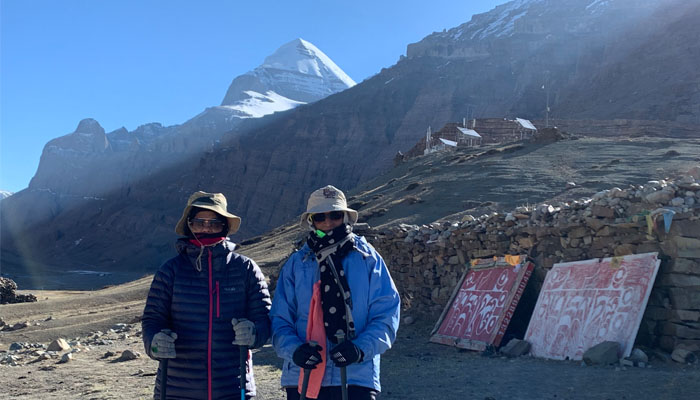 One of the best locations in Tibet for trekking, a tour to Mount Kailash usually includes the three-day trek around the mountain, following the ritual kora path of the pilgrims over a distance of around 52 kilometers. The mountain is a popular tourist attraction for those with the time to take this epic journey, and the best times to visit this area of western Tibet are in the spring and summer, from April to early June and from September to the end of October. These are the times of year when there is almost no rain to spoil the trekking and the weather is calm and comfortable, with clear skies and warming temperatures.

The trek around the mountain is one of the best treks in the world, and is best done in the spring season, when the area is warming up after the cold of winter. An arduous trek that is not for the faint-hearted, this famous trekking route takes you up through rough and rocky valleys to the high Dolma La Pass, at an altitude of around 5,630 meters, one of the highest points in Tibet that tourists can travel to. The normal trek takes three days, staying at the guesthouses of the Drirapuk and Dzultripuk monasteries along the route. An intensely spiritual experience even for the non-Buddhists, a trek around the world’s most sacred mountain is an adventure that will stay with you forever.

The highest mountain in Nyingchi Prefecture of the Tibet Autonomous Region, Mount Namjagbarwa, or Namche Barwa as it is locally known, is considered to be one of the most beautiful snow-capped mountains in China. Soaring 7,782 meters into the air, this stunning peak lies on the eastern edge of the Himalayas in the southwest of Tibet. Climbing up from the deep Yarlung Tsangpo River Gorge, the mountain actually site more than 5,000 meters from the river below, making it part of the deepest canyon in the world. 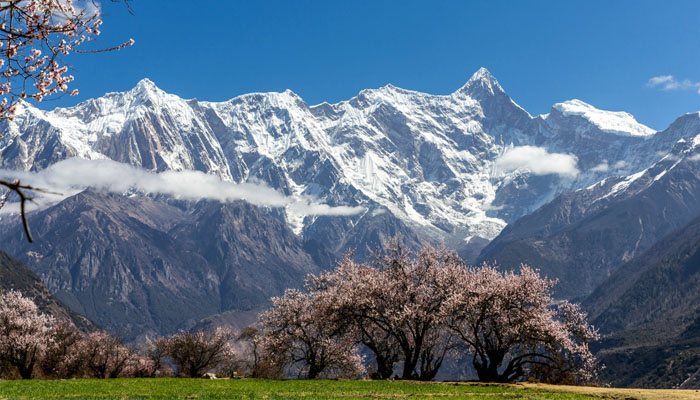 Noted for being the 15th highest peak on the planet, Namche Barwa is also the third most prominent mountain in the entire Himalayas, after Mount Everest and Nanga Parbat in Pakistan. Revered by the local people of the area, it is believed that the summit is a place where the gods gather for their ritual ceremonies, and that a divine temple with a pathway to the heavens once existed on the summit.

If you are planning a trip to the mountain, the best time to visit is from April to June and September to early November, when the spring at autumn weather is at its best. Summer can get a little wet in Nyingchi, as the area is more prone to monsoon rains than the rest of Tibet, though while the winters can get a little cold, it is still warm enough for a visit.

Known also as Kawa Karpo by the Tibetan population of Yunnan Province and Meili Snow Mountain in mainland China, Mount Kawagarbo lies in the western part of Deqen County in Yunnan, and is one of the holiest sites in Tibetan Buddhism. A major pilgrimage site in the Tibetan areas of mainland China, Kawagarbo is really a small multi-peaked range with the highest peak of the range being Mount Kagebo, at 6,740 meters above sea level. The range consists of thirteen peaks in total, and the range is considered to be one of the Eight Divine Mountains of Tibetan Buddhism.

The mountains are held in high regard by the people that live below them, and are of great significance in their Buddhist faith. The local people believe that the guardian deity of their homes lives on the top of the mountain, and that if mankind ever set foot upon its sacred slopes, the deity will abandon the mountain and villages below, leaving them to an unfortunate and catastrophic fate. 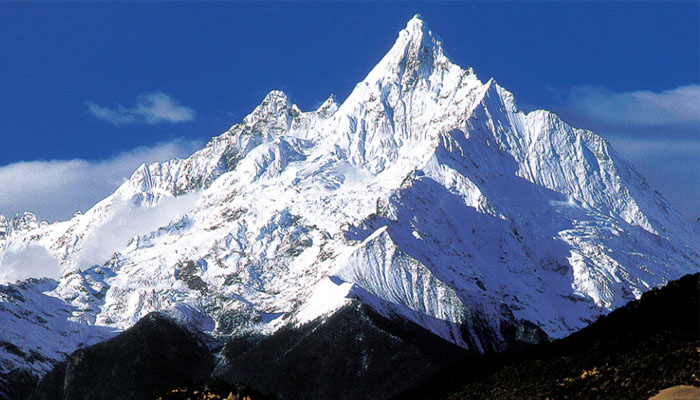 Mount Kawagarbo is one of the holiest sites in Tibetan Buddhism

Regarded as being one of the most beautiful mountains in the world, the range attracts as many tourists as it does pilgrims, most of whom travel to the range to gaze on its ecstatic beauty and photograph it for their own memories of the divine experience. For the pilgrims, the best time to travel to the mountain is in the late autumn, around the middle of October, when hundreds of Tibetan Buddhists make the trek to the famous Snow Mountain to pay homage to the deity at the peak. Often traveling for hundreds of kilometers just to reach the mountain, the pilgrims then spend weeks in their circumambulations of the mountain, making their pilgrimage around the base of the mountain, many prostrating themselves at every step for the entire circuit of this sacred peak.

At just 2,400 kilometers long, the Himalayas may not be the longest mountain range on the planet, but they are definitely the highest. With Mount Everest as the highest point of the mountain range, standing 8,848 meters above sea level, the Himalayas stretch from Northeast Pakistan in the west and through Nepal, India, and Bhutan, to southwest China in the east. The range also includes over 50 mountains that exceed 7,200 meters, and is home to ten of the 14 highest peaks on the planet, all of which are more than 8,000 meters high.

These vast mountains have had a major effect on the climate of the Tibetan plateau, as well as on the climates of Nepal, Bhutan, and southwest China. While Tibet may be a monsoon land, with rains in the summer months from June to September, it is the vast height of the Himalayas that reduces the amount of rain that falls on the plateau from the Indian Southwest monsoon, causing much of the north and west of the plateau to have an arid and desolate landscape. 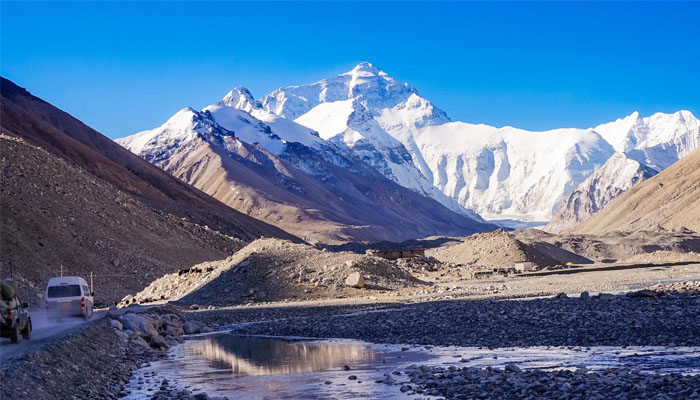 A glorious view of Mount Everest in Tibetan side

Mount Everest, the highest peak in the range, not to mention in the world, is also one of the most popular tourist attractions in the world, and hundreds of thousands of tourists and trekkers head to both Nepal and Tibet to visit the famed Everest Base Camps or climb the stunning peak. Unscaled for almost 100 years, this massive peaks has seen more than 8,000 people reach its summit since it was first conquered by Hillary and Tensing in 1953.

In Tibet, the Everest Base Camp (EBC) has become one of the most popular tourist attractions in China, with thousands of visitors every year, from spring to the end of autumn. The best time to travel to this unique location on the Roof of the World is normally from April to June and September to November, though it is actually possible to visit the mountain’s famous base camp at any time throughout the year. However, the winter months can get very cold at the mountain’s feet, while in the summer, clouds from the Indian monsoon can often obscure the peak, making the viewing almost impossible. And for those that want to take a trip to the base camp, a tour is the only way to get there. All foreign tourists in Tibet are required to be on a pre-arrange tour of the region with a registered tour operator, and our tours to EBC are some of the best you can enjoy.

With several sacred mountains in China, there has never been a better time to travel to this vast land and experience the awe of being in the shadow of some of the most sacred and revered mountains in Tibetan Buddhism. From the Meili Snow Mountain of Yunnan Province and the huge gorge-rearing head of Namche Barwa to the immense sacred pyramid of black rock that is Mount Kailash, this is one trip in China that is well worth taking.

Read More about What are the Most Sacred Mountains in Tibet?