What to Eat and Drink in Tibet

Eastern ethnicities are known for their deep and rich cultures, and every aspect of their heritage is reflective of their uniqueness. Tibetan culture too is no different. Tibetan food and drinks, like Tibet’s own culture and religion, have their own unique characters. Growing at such a high altitude and harsh climate, what to eat and drink in Tibet is quite different from mainland China. And vegetables and fruits are hard to be found in Tibet plateau. Daily diets for most Tibetans are including Tsampa, Butter tea, yak meat, and mutton, etc. Some tourists who can't get used to taste of Tibet have spoken poorly of Tibet traditional food, while others thought that Tibet cuisine is acceptable and not that bad as people said. Whether it’s delicious or not, you can travel Tibet and have a try.

Tsampa is the staple food in Tibet. Tibetan people have it three times a day. Usually, Tibetans ground parched barley into fine flour and mix with salty Tibetan butter tea. And then salty tsampa takes shape. You can enjoy sweet tsampa by making porridge with meat, vegetables, and sugar. Due to its simple cooking process, it's become an instant food for Tibetans, especially for pilgrims to trek Mt.Kailash. 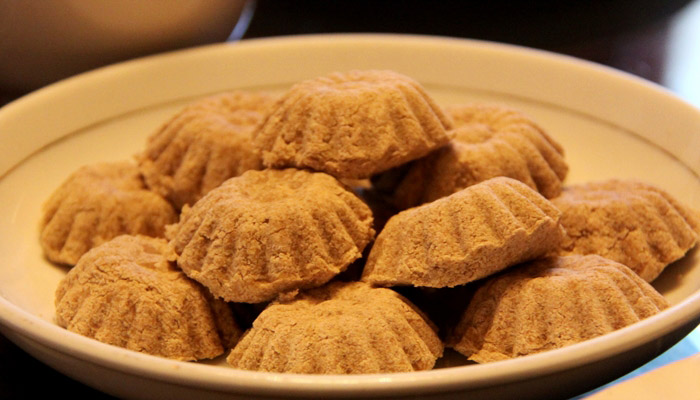 Because Tsampa, in its unaltered state, is extremely chalky and powdery, Tibetans use a trick called Tsang-gam to eat it. According to this trick, you should avoid inhaling while eating Tsampa, failing which you might experience a bad choking fit.

Tsampa too has been modernized and adapted to suit more refined palates. The kind of Tsampa you will find in Tibetan eateries is far removed from the original version. It is sweet and smooth and is accompanied by pickles, hot sauce or any other sauce of your choice. Nevertheless, it is still delicious and worth a try. 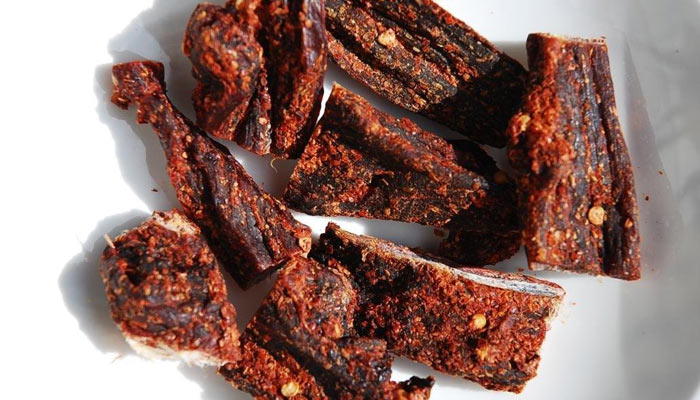 Air Dried Meat made by yak and sheep meat

Air-dried meat is another special Tibet food. It is popular in Tibet and refers to beef and mutton. Tibetan often make air-dried meat by the end of the year when the temperature is below the freezing point. Yak and sheep meat would be cut into strips and then hung in the dry and ventilative places. You must have a try of air-dried meat for its purity and unique Tibetan taste. 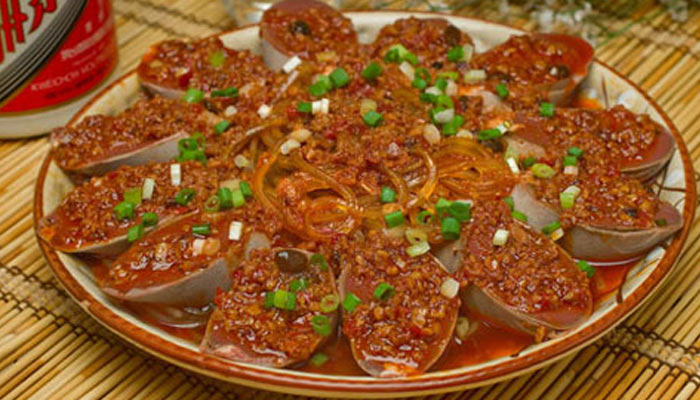 Tibetan momos are pretty yummy and similar to Chinese Jiaozi or Baozi. Mix all the ingredients including minced beef or mutton, fresh ginger, vegetables and seasonings and then wrap them in the flour paste. Just 15mins later, you can enjoy the fried or steamed momos with pepper sauce. This iconic dish is very similar to Chinese dumplings. A small piece of rolled out dough is packed with either beef or mutton seasoned with ginger, garlic and a whole lot of spices and then wrapped up. 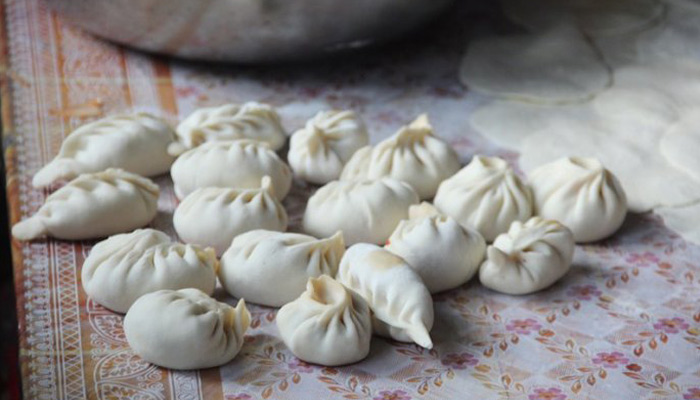 There are many Tibetan Momos tastes

There are a whole plethora of different types of momos for you to try in Tibet. For example, the tsi-tsi is shaped like a mouse and is added to a soup called mothuk. There are momos of different sizes and shapes, as well as tastes. 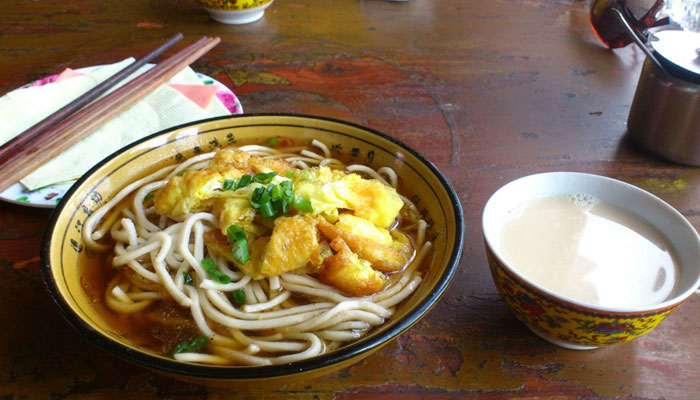 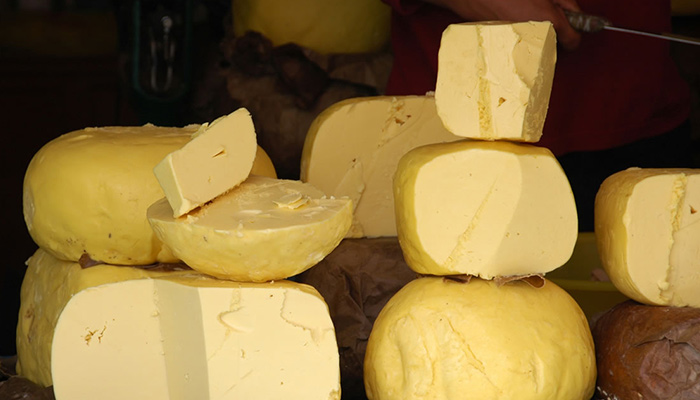 Dri milk can be used to prepare curds and cheeses that act as popular ingredients in Tibetan cheeses. A particular type of cheese called Churpi is manufactured from solidified yoghurt, which is cut into small cubes and hung on necklaces made from yak wool. These cubes act as a sort of candy for travellers because it can take hours to actually finish one cube. Again, this special brand of cheese candy is not for everyone. Most people dislike Churpi, owing to its hardness and distinguished taste.

Tibetan tea can be divided into Tibetan butter tea and Tibetan milk tea. Tibetan butter tea is another staple of Tibet meal and served with Tsampa. It's made up of boiled tea, ghee, and salt. Tibetan people drink it all day long to keep themselves warm from the heart to foot and drive fatigue away. 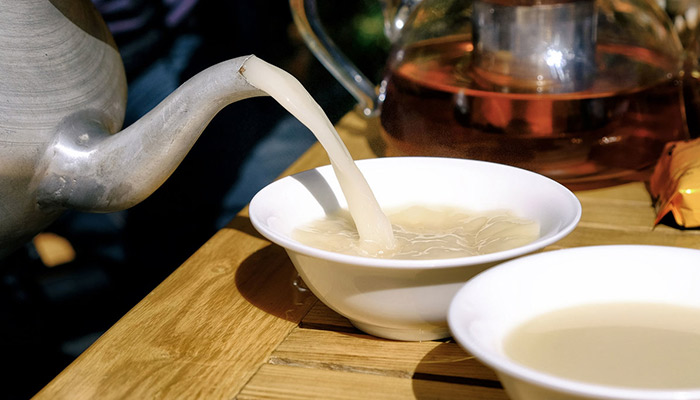 Tibetan Sweet Tea is a quite popular drink

Although this drink is popular, tourists might not find it appealing at once. Compared with Tibet butter tea, Tibetan milk tea (Tibetan sweet tea ) is more popular and acceptable for Tibet tourists. Adding sugar to brick tea and boiled milk make it more palatable and less Tibetan. This drink is no different from ordinary tea and mixes milk and sugar with the liquor. 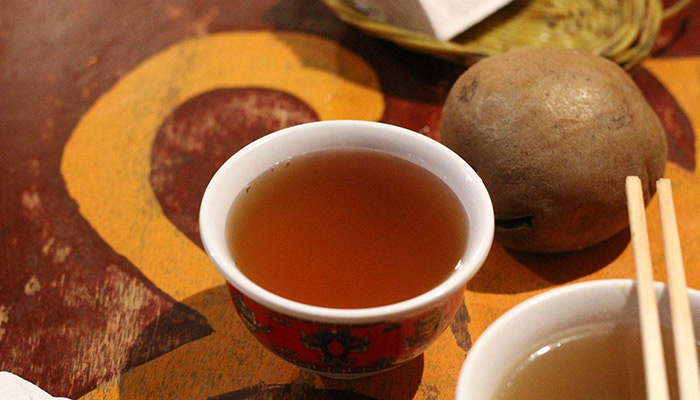 This is another standout drink found in Tibet. Tibetan barley wine is also known as Tibetan Chang, which is brewed from highland barley. It usually tastes a little bit sweet and sour. And the flavor would change with the brewing process and duration. Tibetan Chang with a low degree of alcohol is well liked by Tibetans, including the young, the old, the male and the female. It's also served at various festivals and other important occasions. Chances are that you would be entertained by enthusiastic Tibetans with Tibetan barley wine.

For the occasional adventurous soul, there are more food options to explore in Tibet. You can delve into authentic Sichuan Cuisine which is known for its hot spices and aromatic flavours. If you are not open to experiments, you will also find comfort food in Lhasa. Go for the Nepali or Indian dishes that suit your taste buds. There are also plenty of options in Lhasa, for those who prefer to eat vegetarian. For those who have put up at a luxury hotel, you can, of course, avail their western buffet spreads for lunch and dinner.

What to Eat at EBC?

When you are trekking up to the EBC through remote villages and steep trails, you will find that there are quaint tea houses that sell standard breakfast like porridge, eggs, toast and potatoes. They also offer you a choice of tea or coffee.

But don’t miss out the specially prepared Sherpa Stew. It is a uniquely made spicy stew that is filled with vegetables and thin noodles. It tastes heavenly when consumed super hot in the extreme cold weather.

While on your way to EBC, make sure that you consume light and easily digestible food. Try not to experiment with food while you are on this adventure and also, refrain from drinking alcohol and too much caffeine.

>>View the detailed itineraries about Everest Base Camp tours

What to Eat during Mt Kailash Kora?

Trekking to Mt. Kailash or doing Kailash Kora is undoubtedly a very strenuous activity and to replenish you with added vitality and energy there are tents on the way that sell nutritious food. Although there are not many options to avail from, the special Yak Butter Tea and instant noodles are almost served everywhere. Tsampa, the staple food, is also available for those who like to eat it. You can also bring your own stock of food for the 2-day Mt Kailash Kora, but then you will have to carry it all way up in your backpack.

A Traveller’s Tips on Tibetan Food and Drinks

1. Many booths with some Tibetan style tables and woolen benches at lanes and street in Lhasa and Shigatse selling Tibetan tea. Sometimes it is served in Tibetan tea bowls rather than cups.

2. Aside from Tibetan food and drinks mentioned above, there are some restaurants in Lhasa and Shigatse offering other dishes, like Chinese cuisine, Indian dishes, Nepalese dishes and western dishes. So no worries.

3. While trekking Mt.Kailash, preparing food and drinks for one day is enough. Some tents en route would sell instant noodle, bottles of water, etc. It’s easy to get supplies but the price would be relatively higher.

4. However, local Tibetans would not eat fish due to religion and customs. Just do as Tibetans do.

Read More about What to Eat and Drink in Tibet