Located in the remote southwest part of China, Tibet has developed a unique culture over the centuries, which is influenced by the unique geography, climate conditions, and neighboring countries. Here is the ultimate guide of Tibet culture, covering arts, food, religion, etc.

Religious belief is always the most important thing for Tibetan people therefore temples have a noble social status. Tibetan temples are usually built of stone, earth and wood. Sitting against the rolling mountains, most of the temples seem to be magnificent than the usual. Some of the most representative Tibetan temple buildings include Drepung Monastery, Ganden Monastery, etc.

The house of the local Tibetan usually has two floors. The lower floor is usually for livestock and storing house for grains, and the upper floor is for family members. The upper floor consists of living rooms, a kitchen, a shrine room, etc. A common sight of the Tibetan residential house is the Prayer flags on the rooftop. Many of the houses are built on sunny sites facing the south. The roof of the Tibetan house is flat so that it is easier to clean during the snowfall and conserve heat. 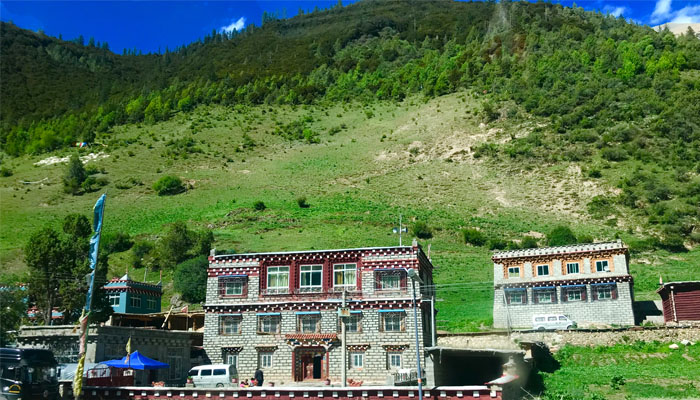 Tibetan housing styles vary from area to area. Tents are common to see in northern Tibet. And in eastern Tibet, wood is widely used for housing. However, in central Tibet, it’s more likely to find that people live in the two-story residential buildings made of brick and wood.

When it comes to the Tibetans' religious beliefs, many people have preconceived that all Tibetans are Buddhists. However, the fact is that Tibet has a few of religions, co-existing peacefully with each other. The main religion in Tibet has been Tibetan Buddhism since the 8th century AD. Before Buddhism arrived in Tibet, the main religion among Tibetans was the indigenous animistic and shamanic religion called Bön. There are also four mosques in the Tibet Autonomous Region with approximately 5,000 Tibetan Muslim, and there is a Catholic church with 700 parishioners, which is located in the traditionally Catholic community of Yanjing in the east of the region. 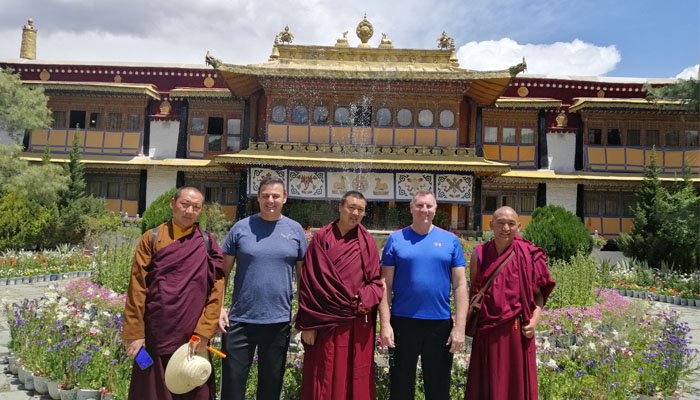 Tibetan Buddhism is the main religion in Tibet.

With a history of more than 5,000 years, Tibetan arts originated from the rock paintings, and well developed during the period of Tubo Kingdom. Later, with the introduction of Buddhism, Tibetan arts made further progress. Therefore, it has been endowed with strong ethnic and religious features. Tourists can get a view of Tibetan art through murals, Thangkas, carvings, etc.

Tibetan murals are the true portrayal of Tibetan history, from which you can find the trace of Tibetan politics, economy, and culture. The murals have abundant subjects, including historical figures and stories, religious myths, Buddhistic stories, folklores, sports, entertainments and so on. The best place to appreciate Tibetan murals are Potala Palace, Jokhang Temple, etc.

Thangka is an art form of ancient Tibetan Buddhist. It framed by colored satin and painted on silk, cloth or paper. It mainly tells about the Tibet history events, religious figures, and Buddhist doctrines. Thangka is also called the Tibetan encyclopedia. If you plan to visit Tibet in summer time, you should not miss the Shoton Festival, when a grand Thangka unveiling ceremony will be held. 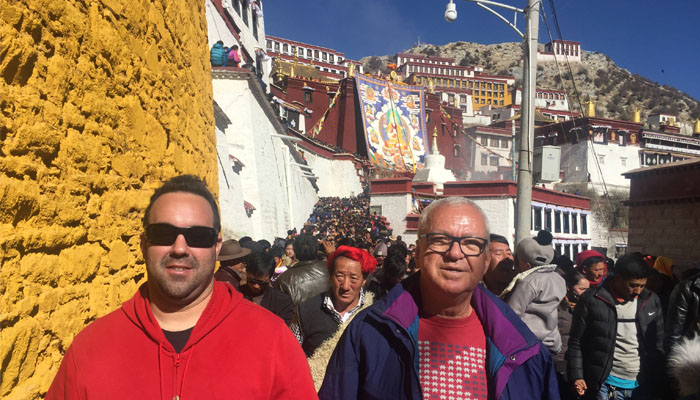 A grand Thangka unveiling ceremony will be held at Shoton Festival.

Tibetan carving is Tibetan culture in miniature. It records the past days of the Tibetan area and people's life. The subjects in carvings cover folk legend, historical figures, and Tibetan Buddhism, etc.

Tibetan handicrafts fully displayed the wisdom of Tibetan people and become a unique art form in the world. You will see lots of Tibetan crafts during your Tibet tour. It is highly recommended to buy some Tibetan souvenirs for your family and friends. Barkhor street is a distributing center for Tibetan handicrafts. Here you can see various Tibetan crafts, such as knives, ornaments, carpets and quilts, etc. 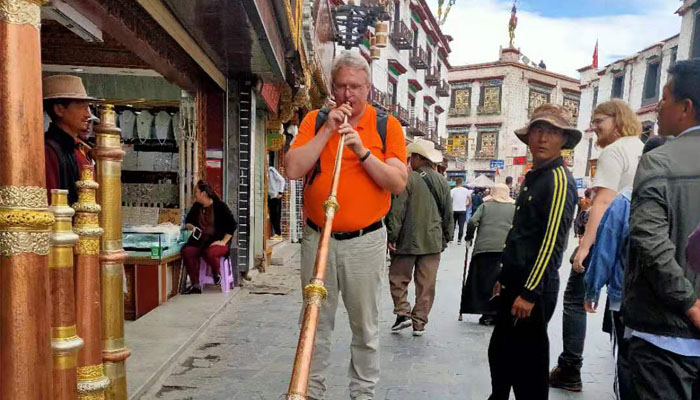 Barkhor street is a distributing center for Tibetan handicrafts.

To many people, Tibet is the ocean of songs and dances. Dancing and singing are extensively spread throughout Tibet since centuries ago. Tibet songs and dances are closely related to daily life. They are categorized as wedding, love, archery, social gathering, folk, drinking, labor, etc. No matter where you will go in Tibet, you could constantly hear some music. On the vast plateau of Tibet, the shepherds express all their feelings through songs, that is also how they practice their voices. In the spiritual places, you will hear chants, and in the marketplace, you will also hear songs.

Due to the special geographical location, Tibetan food has its own uniqueness. It is essential to know about and try a Tibetan diet when you are taking a tour of Tibet. The following are the most prominent Tibetan food.

Tsampa is deeply rooted in Tibetan civilization and is the main staple food in Tibetan. Tibetan farmers mostly grow highland barley. They make Tsampa with highland barley, then store it for the use of whole year around. It is made from roasted highland barley and is easy to preserve. Tsampa can be eaten in many ways. 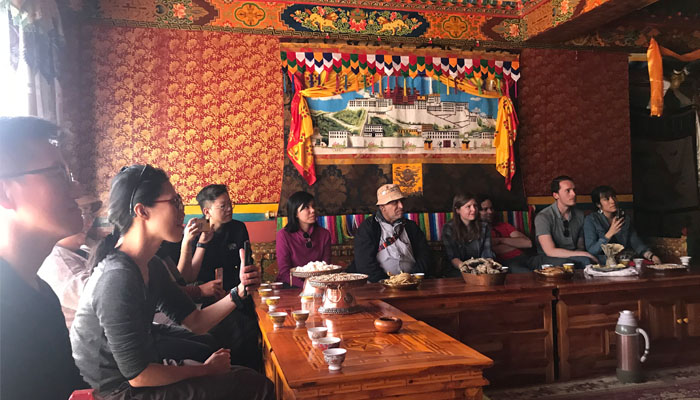 Tibetans are very keen on drinking tea. Butter tea is also known as Tibetan tea and is made from tea leaves, butter, water, and salt. It is the favorite and traditional drink of Tibetans. No matter where ever you are traveling in Tibet, cities, nomadic area or rural areas, you are always treated by a cup of warm Tibetan tea by the local hospitality Tibetans.

The Tibetan people mainly eat beef and mutton. In pastoral areas, the diet is monotonous, and people generally do not eat vegetables. It is well known that beef and mutton are high in calories, which helps people living in high altitudes to resist the cold.

The main clothing item in Tibet is robe. In the farming area, the robes are usually made of thin wool cloth and cotton. In the Nomadic area, the robes are usually made of leather for winter. Tibetan robes are loose, comfy and wide. Nowadays, many Tibetan families also dress in modern clothing such as suits and jackets. However, when the Tibetan festivals come, they would put on their most beautiful and traditional clothes. Every Tibetan usually has two sets of traditional dress, one as the special dress for the festival and special events like marriage and another for daily uses. 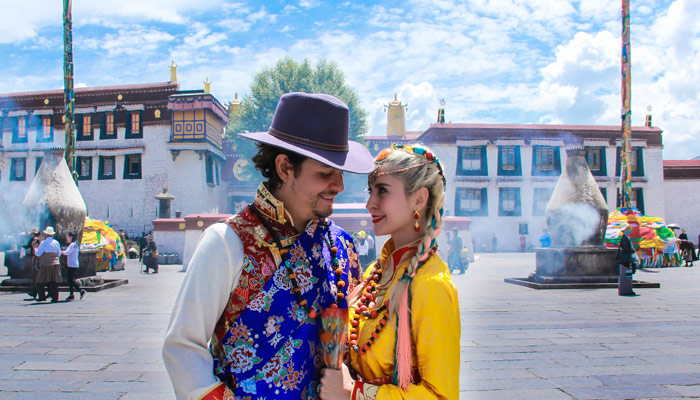 Khata is the most unique ornament in Tibetan costumes as well as the important item used in the ceremony. It expresses local Tibetans’ blessing, respect, friendship, and sincerity to you. Tibetans are fond of white, and think that the white symbolizes holiness, sincerity and honesty, so the most common color of the Khata is white. And you can also find the Khata in other colors like blue, red, green and yellow. Different colors have different implication. Blue represents the blue sky, red stands for the gods, green means the rivers, yellow symbolizes the earth.

Tibetan medicine is one of the most important parts of Tibetan culture. It has a long history of more than 3,000 years and has made great contributions to the prosperity of the Chinese nation.

Tibetan medicine has a complete theoretical system and has many medical books. The most famous medical book is the "Four Medical Tantras" written by Yutok Yonten Gonpo in the 8th century. The book is divided into four parts, from basic theory to clinical practice, including human anatomy, embryonic development, etiology and pathology, treatment principles, diagnostic and therapeutic devices, etc., the content is extremely rich.

It’s widely believed in Tibetan medicine that all the suffering originates from the ignorance. The first responsibility of the Tibetan Doctor is to inform the patients about the illness as well as the treatment. They also use the four diagnostic methods: looking, listening, asking and feeling the pulse, and especially attach importance to the change of the tongue and the first urination in the morning. The herbs utilized in Tibetan medicine are collected from high altitudes, of which effective composition and biological activity are much higher than similar drugs. There are more than 2,000 kinds of plants, 159 species of animals and 80 sorts of minerals in Tibet available for pharmaceutical production.

Tibet developed a distinct culture due to its geographic and climatic conditions. While influenced by neighboring cultures from China, India, and Nepal, the Himalayan region's remoteness and inaccessibility have preserved distinct local influences, and stimulated the development of its distinct culture. You can see the panorama of Tibetan culture through Tibetan architecture, language, arts, foods, etc. As the Tibetan tour expert with over 20 years running experience, Tibettour.org has designed a series of Tibet culture tour packages for you to discover the essence of the holy land. And you can also send us your inquiry and our Tibetan travel guru are always here to help you out.