Shoton Festival is a great festival in Tibet, a celebration to mark the end of the monks' Yarné, their hundred day summer retreat. This festival starts on the last day of the sixth month in Tibetan Calendar and lasts for a few days. 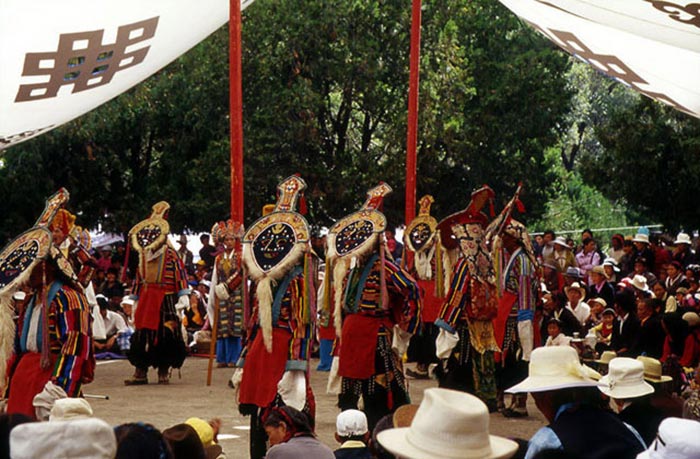 The Shoton Festival is second only to the Tibetan New Year round the year. Literally translated, it means "yogurt tasting" festival in the Tibetan Language. In May, 2006, it was inscribed on the Chinese intangible cultural heritage list.

Attractions: Activities such as Buddha painting sunning ceremony will be held in the Drepung Monastery. Tibetan operas will be performed in the Norbu Lingka and Longwangtan Park, where you may see flocks of Tibetans go out to play and relax, and in Damxung County, northern Lhasa, an event of horse racing will be presented then.

For photographing: As the grandest event during peak tourist season, the Shoton Festival will definitely cheer up photographers for there is everything for they to capture, either the moment when the Buddha painting is carried out by Buddhist monks, or actors performing Tibetan opera wearing dedicate masks and costumes.

The Drepung Monastery: Sitting at the southern slope gully of the Gebeiwoze Mountain about 10 km west of downtown Lhasa. It was built by Jamyang Qoigyi Zhaxi Bendain, a favorite disciple of Tsongkapa, in 1416. It is one of the three major monasteries of Lhasa and one of the six major Gelug monasteries in China. The temple now occupies an area of more than 200,000 square meters.

Norbu Lingka: Located in downtown Lhasa, Norbu Lingka used to serve as the summer palace of Dalai Lamas in the past. Now it has become a public park. Meaning "treasure park" ("Norbu" means "treasure" and "Lingka" means "park") in Tibetan language, Norbu Lingka covers an area of 360,000 square meters.

Longwanttan Park: Sitting opposite from the Potala Palace, the park is one of the renowned parks in Lhasa.