What to See in Tibet

Having a long history, Tibet draws millions of travelers to explore its ancient culture, customs and religion. Known as the roof of the world, unique plateau scenery is another Tibet travel highlight. There are many places to visit in Tibet and we just list Top 10 attractions to see in Tibet.

AS a symbol of Tibet, Potala Palace is a must for all the tourists at home and abroad.

Potala Palace originally started construction since 7th AD, which was built for Tang Princess Wencheng by Songtsan Gampo, ruler of the Tubo Kingdom. The present Potala Palace was reconstructed by the 5th Dalai Lama in 1645. Since then it has become the residence for Dalai Lamas with 13 stories and 1000 rooms. Under the clear blue sky and brilliant sunshine, you would marvel at Potala Palace Archtecture, this majestic white and red building complex. Until now, it’ so hard to image how Tibetans completed this magnificent building on the roof of the world.

Besides, famous as world cultural heritage site, Potala Palace is the palace of art, collecting innumerous Tibet treasures and art works. Luckily, many parts of Potala Palace has turned to a museum open for public.

Travel tips:
1.Ticket price for Potala Palace is CNY200 in peak season (from May to October) and CNY100 in slack season (November to Next April).
2.Only 2,300 tickets are issued every day, of which 1,600 for travel agents and 700 for individuals. No worries about tickets and just contact us to help.

2. Follow The Holy Pilgrims and Circle around Jokhang Temple 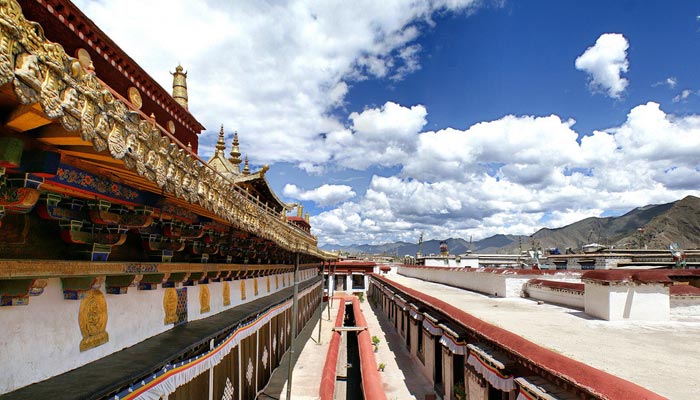 Jokhang Temple in Lhasa is regarded as the holiest temple by Tibetans. You would see pilgrims prostrating in front of Jokhang Temple or circling around in the clockwise direction.

It was established by Tibetan King Songtsan Gampo at Barkhor street for his two brides: Wencheng Princess of Tang Dynasty and Princess Bhrikuti from Nepal. Thus Jokhang temple with roof covered with gilded bronze tiles combines four architecture styles of Tibetan, Han, Nepal and India altogether. And the statue of Sakyamuni brought by Princess Bhrikuti from Nepal is still housed in Jokhang Temple, which you should not miss in Tibet Lhasa tour. 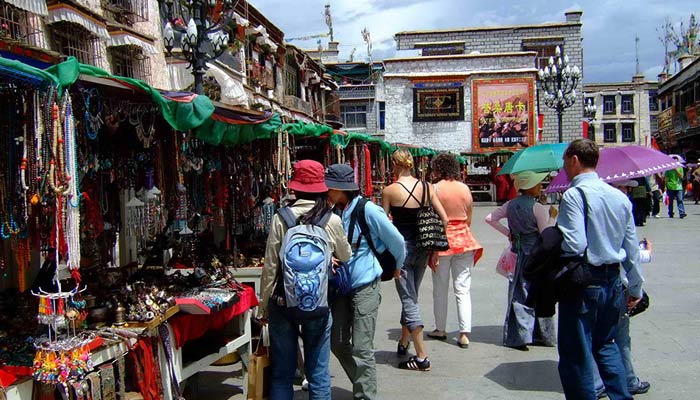 Our clients were buying some Tibetan souvenirs for their families and friends on Barkhor Street.

Situated at the old town of Lhasa city, Barkhor Street is well-known for circumambulation and bustling market. It still remains the ancient appearance and Tibetan living style.

Doing the kora with pilgrims or trying to bargain with Tibet locals at Barkhor street market would be a totally fresh experience for you.

Travel tips:
It’s suggested to walk in a clockwise direction along Barkhor street for many lanes and forks. 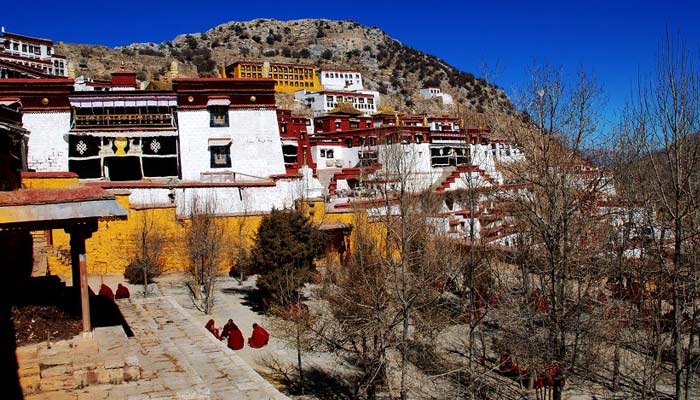 Ganden Monastery is situated at 40 kilometers northeast of Lhasa. It was founded in 1409 by Je Tsongkhapa Lozang-dragpa, founder of the Gelug Sect. The monastery was destroyed after 1959, but then it has been partially rebuilt.

Ganden contained more than two dozen major chapels with large Buddha statues. The largest chapel was capable of seating 3,500 monks. Three main sights in the Ganden Monastery are the Serdung, containing the tomb of Tsongkhapa, the Tsokchen Assembly Hall and the Ngam Cho Khang, the chapel where Tsongkhapa traditionally taught.

You would marvel at exquisite frescoes and sculptures, especially cultural relics and handicrafts made by Tibetans. What’s more, you can try to trek from Ganden to Samye for its favorable position. 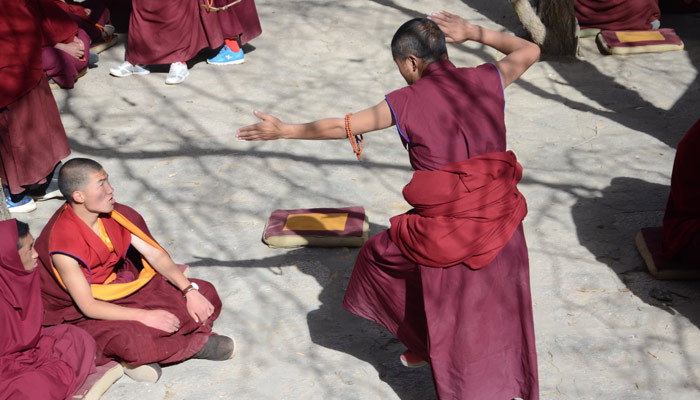 Debate session of Sera Monastery is a good way for monks to test their mastery of Buddhism.

Together with Ganden Monastery and Drepung Monastery, Sera Monastery is another great Tibet monastery. It is located 1.25 miles north of Lhasa. Sera Monastery was founded in 1419 by Jamchen Chojey Sakya Yeshe of Zel Gungtang (1355–1435), a disciple of Je Tsongkhapa. It is said that the origin of its name is attributed to a fact that the site where the monastery was built was surrounded by wild roses in bloom. 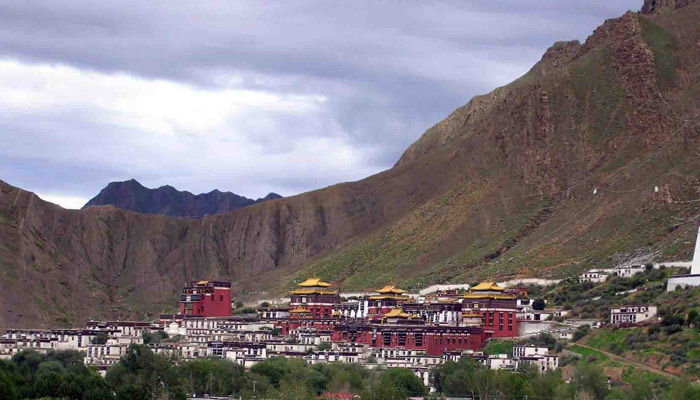 Tashilunpo Monastery sits on Mt.Nyima in the west of Shigatse, the second largest city in Tibet.

Tashilunpo Monastery houses many Buddhism manuscript, Buddha Statues and Stupas. Besides that, a grand three-day festival would be held in Tashilunpo Monastery every year. During the Tashilunpo Festival, three different thangkas would be unveiled respectively so as to remind people to cherish the past, enjoy happy lives and hold hope for the future during three days. And cham dances are performed. If time allows, you can time your trip with Tibetan festivals.

7. Camp at Lake Namtso and Gain A Sense of Purification 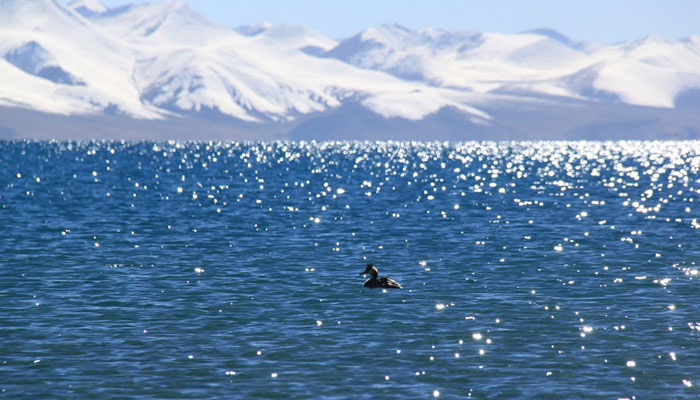 A duck was swimming in the crystal blue Namtso Lake leisurely.

Lake Namtso means Heaven Lake in Tibetan language. Located at the altitude of 4,718 meters, holy Lake Namtso is the highest saltwater lake in the world. Its shape is similar to a rectangle, with 70km in length from west to east and 30km from north to south. Covering an area of 1,920 square kilometers, Lake Namtso, following Qinghai Lake, is considered as the second largest saltwater lake in China.

Surrounded by snow-capped mountains, Lake Namtso with yak herds and nomad camp nearby offer you a picturesque scenery. It’s so fantastic to see numerous stars sparkling under the blue night sky above Lake Namtso. Sunrise and sunset here are really breathtaking.

8. Enjoy The Beauty of Lake Yamdrok 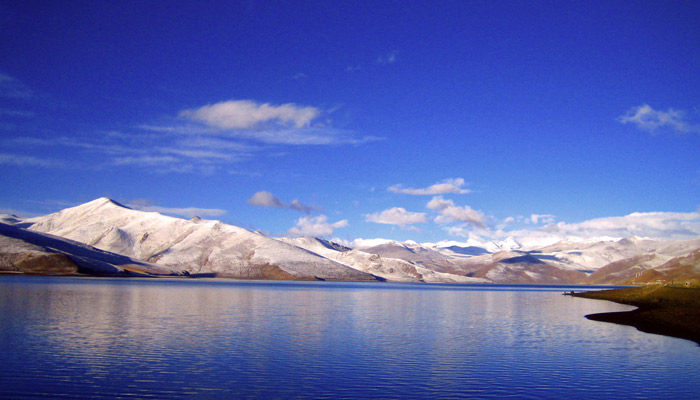 You can appreciate the beautiful Lake Yamdrok while driving towards Shigatse from Lhasa.

Together with Lake Namtso and Lake Manasarovar, Lhasa Lake Yamdrok is also regarded as one of the three holy lakes in Tibet. It looks like a coiling scorpion with an area of 678 square kilometers. 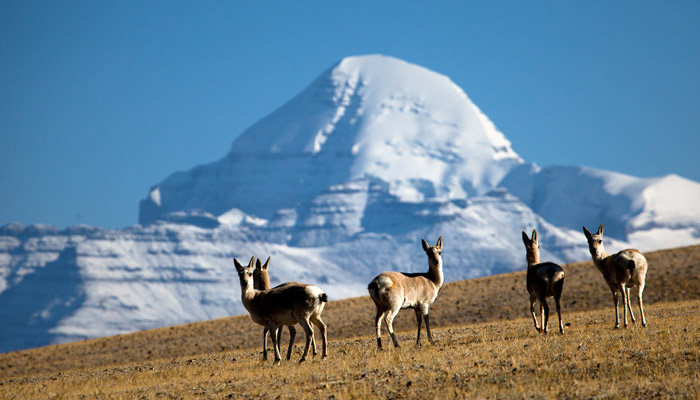 Tibetan antelope were grazing around the grassland near Mt.Kailash.

Mt.Kailash and Lake Manasarovar in Ngari are the two remotest and yet popular Tibet attractions for tourists and pilgrims.

At an altitude of 6,656 meters, Mt.Kailash means mountain of God in Tibetan, which is worshiped as the holy mountain by four major religions, including Bön, Buddhism, Hinduism, and Jainism. Countless pilgrims from all over the world to do Kailash trekking every year. Apart from the religious influence, the majestic Mt.Kailash with snow-covered peak all year along is worth your coming.

Situated at the southern foot of Mt.Kailash, Lake Manasarovar is another holy pilgrim destination. With an altitude of 4,590 meters, it’s also the source of four rivers, namely the Brahmaputra, Ghaghara, Sindhu and Sutlej. Under the blue sky and white clouds, turquoise lake water is glimmering tranquilly and give you a sense of peace.

Travel tips:
Mt.Kailash kora ( Mt.Kailash yatra ) can be done from April to October. 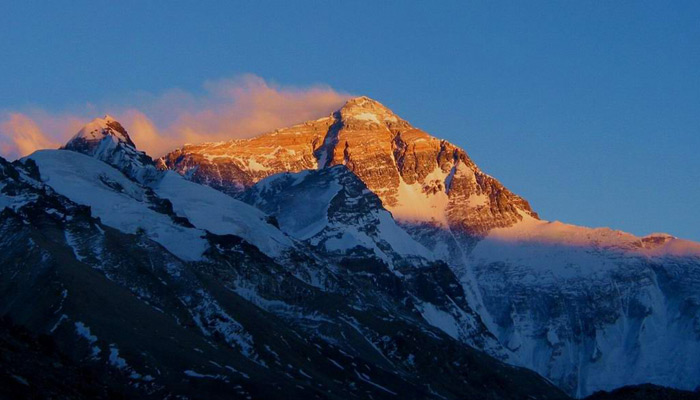 This is one of Mt.Everest photos was taken by our client at sunrise.

Lying the boundary between China and Nepal, Mt. Everest (Mt.Quomolangma) has an altitude of 8,848 meters, which is also known as the third pole of the world.

Everest summit is covered with snow all year around. When sun comes out, the spectacular view would take your breath away. Every year hundreds of thousands of mountaineers and trekkers are swarming to do Mt.Everest expedition, the dreamland for mountaineering adventure. Catching a clear view of Mt.Everest panorama is always a dream for most travelers.

Travel tips:
The best time to do Everest Base Camp climb is April to May and September to October for the stable temperature and good weather in Tibet.

Read More about What to See in Tibet

Be the First One to Comment "What to See in Tibet"