April in Tibet is the beginning of the tourist season, after the usual closure of the plateau region during the period of the Tibetan New Year. Generally, April is a warm month with little rain and good sunny days, and is one of the best times of year for trekking. So if you are thinking of coming to Tibet in April, here are some important details for you to know about Tibet in April.

How is the Weather Like for Tibet in April?

After the colder weather of winter, April is the real start of spring in Tibet, and the weather is beginning to warm up. As spring begins in earnest, the warmer weather prompts the snows of winter to melt and disappear.

April is one of the best times of year to visit Tibet, after the colder weather of winter is gone and before the rains of the monsoon come in. Temperatures across the region are on the rise, with an average daily high of around 16°C, while the nightly drops are not so harsh, falling to around 2°C on average across the plateau. Some areas are still colder at night, with sub-zero temperatures, while other areas in eastern Tibet see warmer nights and hotter days.

Top Places to Go in Tibet in April

As the beginning of the spring tourist season, April offers a wider range of destinations across Tibet for the ardent traveler. And with bright sunshine and dry warm days ahead, there are plentiful places to go in Tibet in April.

Lhasa is the renowned City of Sunshine, and this is never more evident than in the spring in Tibet. The stunning city comes alive with the warmer weather, as travelers begin to flock to the world’s highest capital city. Temperatures average around 7-8°C, with days getting as high as 15°C. Cooler days do come at times, and you may see one or two days of light drizzly rain, but never enough to spoil your Lhasa tour. 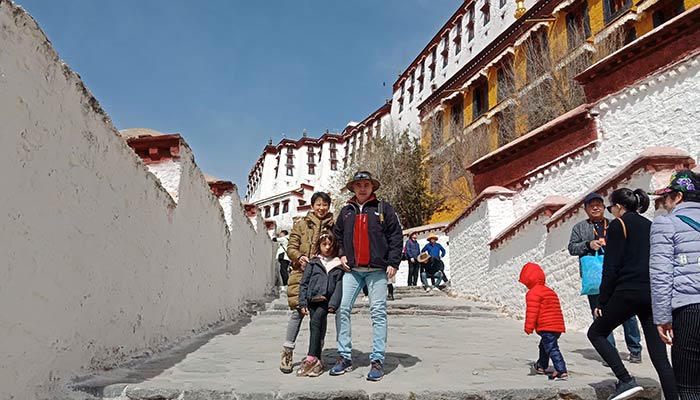 Lhasa in April has bright sunshine to offer.

Shigatse is the second city of Tibet, and while it is open all year round, the spring sees the temperatures rise to something more comfortable from the colder temperatures of winter. A colder region of Tibet than in the capital, April temperatures in Shigatse generally range from around 7°C in the daytime to as low as -1°C at night on the coldest nights. However, the bright sunshine of the spring makes the temperatures feel warmer, and the fresh clear skies are stunning.

The Shigatse city region of the prefecture does have a higher amount of rain than in Lhasa, due to its location in the center of the plateau, and relatively strong winds prevail at up to 12km/h. However, while the rain is more, it happens less frequently, so you can expect maybe only a single day of light rains.

Moving west to tour the famous Mount Everest Base Camp (EBC), you will find that the weather gets a little colder in April than in the major cities. With its remote location at the foot of Mount Everest, on the border with Nepal in the depths of the Himalayas, EBC has an average temperature of around -2°C. The weather in general is a lot cooler than in Shigatse, and you can expect to see temperatures of only around 6-7°C during the day through April. Nights can also be much colder, dropping to as low as -10°C on the coldest nights. However, warm clothing can easily counter the colder temperatures, and you will not really go out at night much, since you cannot see the mountain anyway. 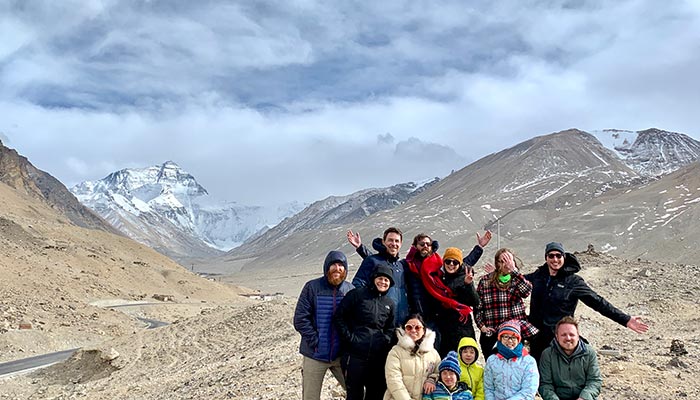 EBC weather in April is a little colder than that in the major cities.

April at EBC is still a time when there can be snow around the mountain, and it is not unusual to have some snow remaining at the base camp and the surrounding hills. There is also a light chance of some light rain, though very little and not often. The spring month of April also sees lighter winds across the Himalayas, reaching only around 6-7km/h. April is also the best month for tackling the epic four-day trek from Old Tingri to EBC, with stunning scenery and bright warm weather to make the trek more enjoyable.

There is a small chance of rain around the mountain, though not much of one, and you would be unlucky to see a rainy day while taking on the Kailash Kora Trek in April. It is more likely that there will still be some snow on the high ground and the passes, though not enough to make them impassible.

April is one of the best months for taking on the amazing trek around the mountain, which takes around three days, though pilgrims can do this route in one day. With bright sunshine, clear skies, and excellent weather, albeit a little chilly, the experience of undertaking the hardest trek in Tibet and the most important pilgrimage on the planet is outstanding beyond belief.

Tibetan Festivals to Experience in April

April may be one of the best months to spend in Tibet, but it is not renowned for its festivals across most of the region. Whether by accident or by design, April is the month that is best known for the epic blossoming of the peach trees in the eastern prefecture of Nyingchi.

The Nyingchi Peach Blossom Festival is possibly the only festival in Tibet in April, which makes it well worth going to this eastern area of the region for a break. And not only is it a lot warmer in this part of Tibet in April, thanks to spring coming to Nyingchi before anywhere else on the plateau, but you are guaranteed to have an amazing experience with some of the best mountain views in Tibet. 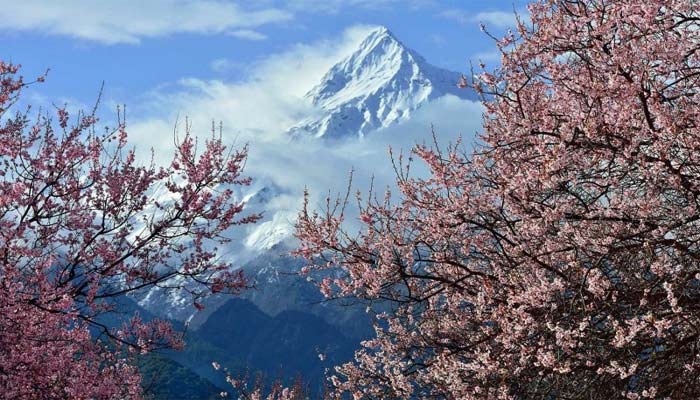 Beautiful peach blossom covers the valleys and riverbanks of Nyingchi.

The stunning Peach Blossom Festival in Nyingchi generally runs from around mid-March to the end of April, and is one of the most outstanding festivals in Tibet. The entire area of Nyingchi is covered with peach trees, especially in the valleys and along the riverbanks, and these all come into bloom in the middle of March. And for anyone visiting Tibet in April, the Nyingchi Peach Blossom Festival is a definite must-see event.

What to Pack for Visiting Tibet in April

Packing for Tibet in April is very little different to packing for winter months, as you will still need those warm sweaters and fleece jackets for the colder nights and cooler areas. Your basic packing list should include the following:

You should also include the following if you are planning on trekking around Mount Kailash or from Tingri to EBC:

April is one of the first and best months to take a Tibet tour. The warmer weather brings out the best of the new growth on the plateau, and the freshness of the weather and the beauty of the new beginning is something amazing to see. And with April usually being the first open month of the season, you can sometimes get a lower price for the tour than in the peak months of summer.

Be the First One to Comment "Tibet Weather in April"