Tibet Weather in August: Weather Guide on Travelling to Tibet in August

Tibet is a great summer resort in August. This makes Tibet also one of the most popular domestic travel destinations in August. Due to plenty of sunshine and rainfall, mountains are at their greenest time and flowers are blooming. The natural landscape of Tibet Plateau in August is really marvelous. Rainfall mainly occurring at night makes August still a nice travel season in most areas of Tibet.

How is the Weather in Tibet in August?

Tibet weather in August is warm and rainy. August is the wettest month in Tibet of a year, which brings most rainfall of a year in Tibet. Since mid-late June, Tibet has entered its monsoon. Sometimes, the rainfall makes transport and travel difficult. Luckily, it decreases gradually at late August. Meanwhile, comparing with other parts of mainland China, it is not that hot in Tibet as people imagine in August. The daily temperature in Tibet is still pleasant from 10℃ to 25℃. And it gets cooler as you move to higher places, while most cities in China are encountering the hottest time of a year in August.

Where to Go in Tibet in August?

As it mainly rains at night, Tibet weather in August is still good for many outdoor activities.

Lhasa is available to visit all year around. As the center of Tibet's political, economic, cultural and religious activities, Lhasa is well developed, combined with its ancient and mysterious atmosphere. Tourists will have plenty choices of hotels from top end five-star hotel to the comfortable local hostel, varies of the restaurants mixed with Tibetan, Indian, Nepal, Western and Chinese flavor. 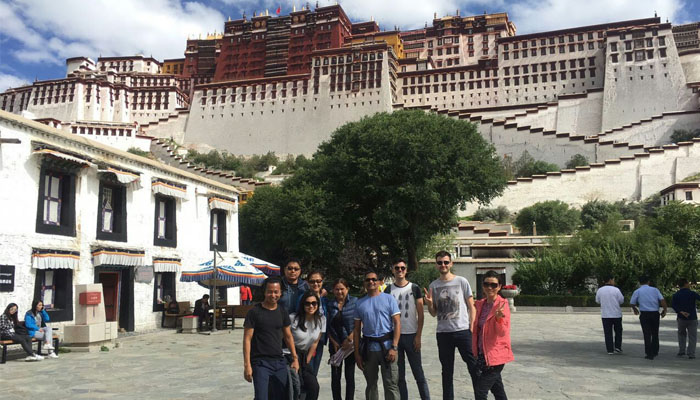 The land mark of Potala Palace, spiritual center of Jokhang Monastery and bustling Barkhor Street are always the must-go spots in visiting Lhasa in August. Temperature still drops a lot from daytime till night, warm jacket is still suggested travelling in August in Lhasa.

As the 2nd and 3rd largest cities in Tibet, both Shigatse and Gyantse are popular among the domestic and overseas travelers. Well-paved road and comfortable hotel facility makes the two cities great destinations all year around. The temperature there is similar as it is in the Lhasa city, but more windy and cooler. Never miss the highlights such as holy lake of Yamdroktso, the Pelkor and Gyantse Kumbum, Panchan Lama’s seat of Tashilhunpo Monastery, etc. For more you can take our classic central Tibet small group tour to cover the two places and Lhasa in one itinerary. 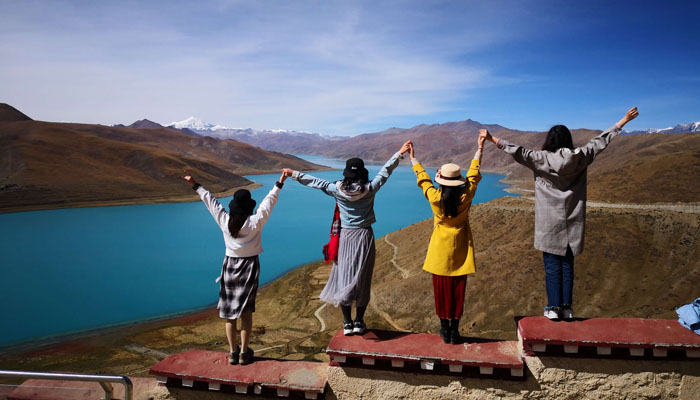 Namtso Lake is the second largest lake in Tibet and the third largest saltwater lake in China. August brings abundant water and grass to the pastoral area, yaks and sheep scattered around the mountains, grasslands to Namtso Lake; The turquoise tender lake with the peaks of Nyenchen Tanglha towering over the lake to the south offer us one of the most beautiful natural sights in Lhasa. Be aware of the high altitude (4718m) of the Namtso lake. It is cooler than in the cities in August. And sometimes it can snow at the Lakenla Pass of the Nyenchen Tanglha Range with the altitude of 5190m to the Namtso Lake. So always keep warm visiting the heavenly lake of Namtso. 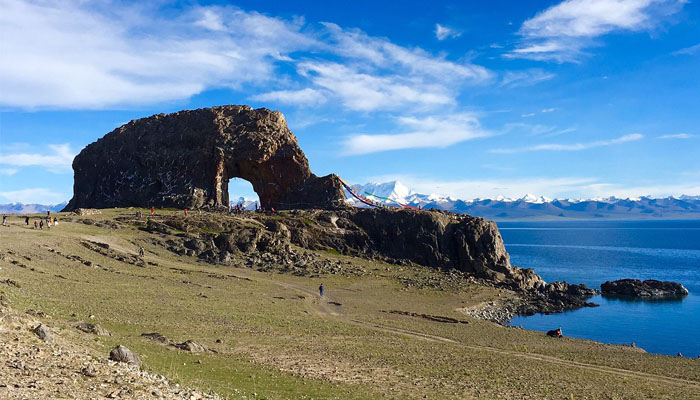 After enjoying the stunning sunrise and sunset of Namtso Lake, you can move forward to participate in Nagchu Horse Racing Festival which is usually held in August. You will witness many traditional nomad sports such as horse racing, horsemanship, and archery etc. 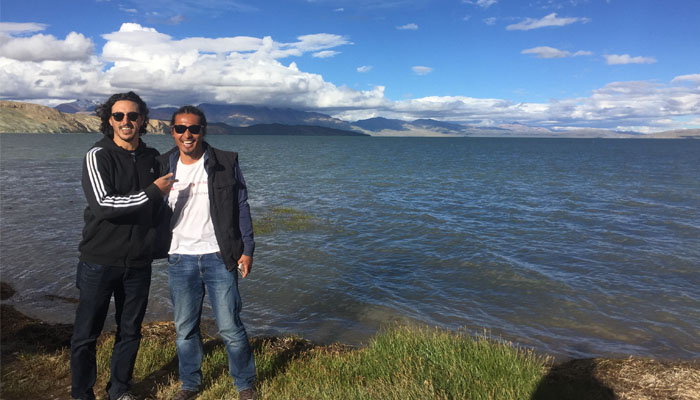 Nowadays the road are mostly well paved to Mt. Kailash, just get prepared one or two more days for there may be slight landslide due to the large rainfall in August in case. With the altitude over 4000m, the weather is also changeable in the mountains in August. Light luggage is always suggested and waterproof jacket with hood is a good choice for the trekking tour.

Attending Tibet festivals with locals is a different way to experience Tibetan culture and customs. If you get interested in a festival tour in Tibet, feel free to check the dates of a year with us and plan the festival wonder in advance.

As Shoton means yogurt, Shoton Festival is also named as Yogurt Festival with abundant activities. It's one of the most solemn Tibetan festivals. Giant Thangka unveiling ceremony is held and Tibetan operas are performed during the festival. It is also called "Tibetan Opera Festival" or "Buddha Exhibition Festival”. 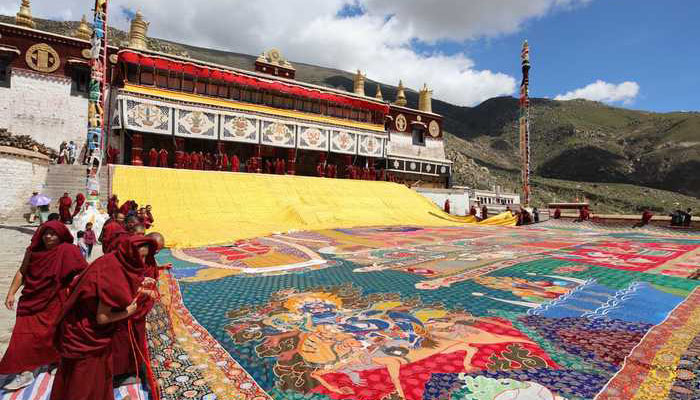 Usually the festival starts with Thangka unveiling at Drepung Monastery in the early morning and followed the Tibetan operas performed at Norbulinka and Zongjiao Lukang Park in Lhasa. Warm water proof jacket with hood is suggested to take along with you just case the shower sometimes.

Nagchu Horse Racing Festival, lasts for one week, is one of the most important folk festivals in Tibet. Lots of Tibetans would dress themselves well and gather together at Nagchu town from different regions. Many kinds of exciting activities were held, including the traditional ethnic sports meeting, horse racing, horsemanship, picking up Khada and archery on the horseback etc. Thousands of nomads will get together to celebrate and join in the big festival. 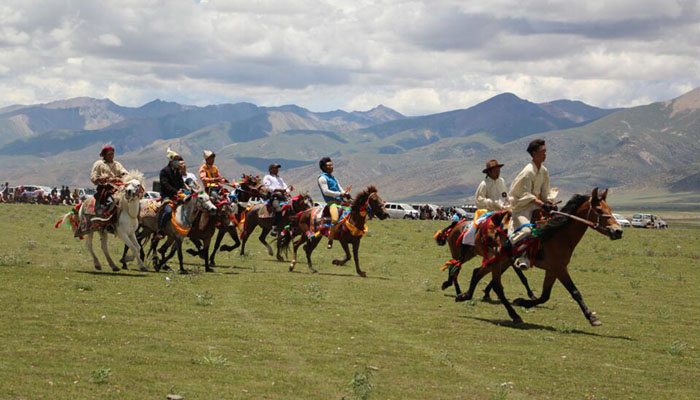 Ongkor Festival (usually in August-September, about 1 to 3 days)

Ongkor Festival with a history of more than 1500 years is held by traditional Tibetan farmers to express thankfulness to the Gods for good harvest. Ongkor is translated as circling around the edge of the fields in Tibetan language. It is popular among Lhasa, Shigatse and Shannan in TAR and take place between August and September in Tibetan Calendar. The exact date varies according to farming season. Generally speaking, it’s held two or three days before autumn harvest and lasts one to three days. Once the festival is over, the autumn harvest starts.

What to Wear for Travelling to Tibet in August?

Tibet weather in August still varies greatly from day to night. Summer clothes and trousers are enough for the daytime. Down coats and jackets are still needed for nights and places at higher altitude. Never forget to keep yourself from sunburn with sun cream, sun hats and sunglasses. Rain gears and water-proof shoes are highly recommended. If you are taking the hiking or trekking tour packages or needs to move to higher altitude, warm clothes will be always suggested. Generally, T-shirt, jacket and down jacket are suggested to take visiting within Tibet in August.

Warm weather in August offers us a nice and comfortable time traveling within Tibet. August rain brings us a more lively and vivid Tibet. Be aware of the changeable weather on the plateau in Tibet in August. Tibet peak tour season starts from June. Domestic students are still on their summer holidays in August. Large number of domestic travelers rushing into Tibet make it a high tour season in August. It's wise to contact us to make earlier reservation for your Tibet tour in August.

Be the First One to Comment "Tibet Weather in August: Weather Guide on Travelling to Tibet in August"