Best Time to Visit Everest Base Camp in Tibet (2022 Update)

Traveling to the Everest Base Camp (EBC) in Tibet is one of the iconic events of any tour of the Tibet Autonomous Region of China, and is an epic journey that takes you across the vast Tibetan plateau to the world’s highest mountain. The weather in the Himalayas is notoriously hard to predict, though it is not as cold and cloudy as you might imagine. Most of the time the area around Mount Everest is clear of snow, has little in the way of rain, and gives you an amazing view of the summit. So what is the Everest base camp weather like and when is the best time to visit Everest Base Camp? Check to find the answers and more guides.

Everest Base Camp Weather and Climate

Lying around 12 kilometers from the summit of the world’s highest mountain, at an altitude of around 5,150 meters, Everest Base Camp in Tibet has a climate that can only be defined as harsh for most of the year. However, it is not so harsh that you cannot travel there, nor so cold that you will freeze in minutes while taking your photos. For the bulk of the year, from around March to November, the base camp area is relatively mild, with temperatures that are pleasant enough to travel in. 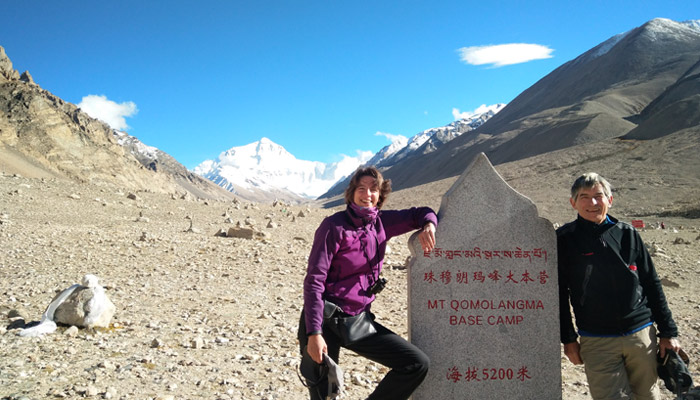 Everest Base Camp is a good place to travel in most of the year.

The winter months at EBC can get quite cold, ranging from around 4°C in the daytime to as low as -15°C at night. Snow is always present on the summit of the mountain, due to the extreme altitude, but at the base camp, the snow only usually falls in late December to around the end of February. And even that is not really deep enough to stop travelers visiting.

In the spring, from April to May, the temperatures rise throughout the season, and the daytime temperatures range from 7°C in March to as high as 15°C in May, with temperatures at night also increasing, reaching around freezing by May. Any snows have long since melted, and the weather is clear with bright skies and plenty of sunshine.

In the summer months, from June to September, the skies remain clear for most of the season, despite it being the monsoon in Tibet. EBC does see around 170mm of rain per month in the rainy season, but most of this falls in the late afternoon and evening. Temperatures rise to around 16-17°C throughout summer, with drops at night to only around 5-8°C.

Autumn, from October to November, sees a return to the dry sunny bright weather, with clear skies and little rain. Temperatures are still relatively high, ranging from 12°C in October to as low as 7°C in November, with nights dropping to around -12°C by the end of the season. However, the winds can still bring humidity to the area, and can be bitingly cold as the season edges into winter.

If you are looking for the best time of year to visit the base camp at the foot of Mount Everest, then the spring and autumn seasons are your best option for travel. Spring, from April to May, and autumn, from October to November, are the ideal times to visit this high-altitude tourist attraction. From the beginning of April to the end of May, the temperatures are slowly increasing, making the weather pleasant and comfortable, though a little chilly at night still.

The clear skies and bright sunshine make for great views of the summit of the mountain, and are ideal for those that are looking to take the trek from Old Tingri to EBC. The days slowly start to get longer as well, meaning you have more daylight hours to make the most of the views and the days of hiking. 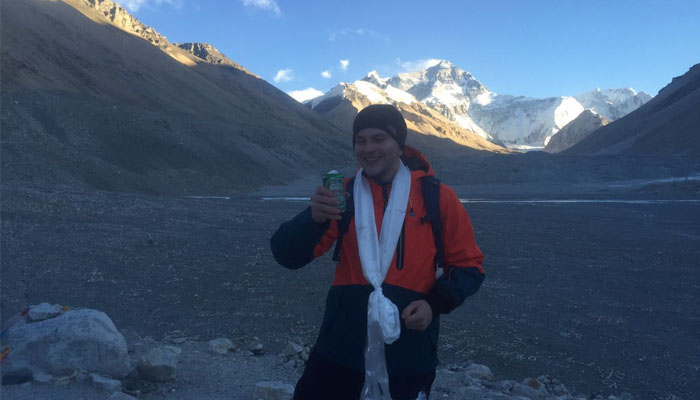 Beer to Celebrate the Moment of Seeing Everest Sunrise During a Spring Visit.

Spring temperatures at EBC are not yet the warmest of the year, and it can still get cold at night, though not as cold as in the winter months. Throughout April you can expect the days to be as high as 10°C, and the nights to drop below freezing to a chilly -5°C. However, by May, the daytimes are often reaching as high as 15°C, and the nights barely drop to around freezing, continuously warming up as the summer season approaches.

Autumn is classed as the “second best” time to visit EBC, right after the monsoon rains have passed and the skies clear up, leaving the ground a little drier. The autumn days are warm and comfortable, and the skies are dominated by the brilliant sunshine and fresh refreshing air. The landscape around is still lush and green from the heavy monsoon rains, which makes for better photos on the long journey to the mountain.

While the winds do blow stronger in the autumn season, they are also blowing away the last vestiges of the monsoon rain clouds, bringing the magnificent peak of Mount Everest to light once more, making the vista of the Himalayas one of amazing clarity. Autumn may be the second best time to visit Everest, but for many it is the best time for the trek from Old Tingri to EBC. The lush grasslands and verdant woodlands make the trek a more enjoyable, and colorful experience, with great views of the mountains as you get closer to EBC.

The summer months, from June to August, are the monsoon season in Tibet, and at EBC, the rains come on a lot stronger than in most of the rest of Shigatse Prefecture. Rain can fall almost constantly over the summer months of July and August, which see the highest rainfall of the year at EBC. However, at the same time, the temperatures rise for both day and night, making it a much warmer and more humid time of year to travel. Despite the higher rainfall, July and August are still the middle of the peak period of tourist travel at EBC, with many using raincoats to shelter against any rains that come. 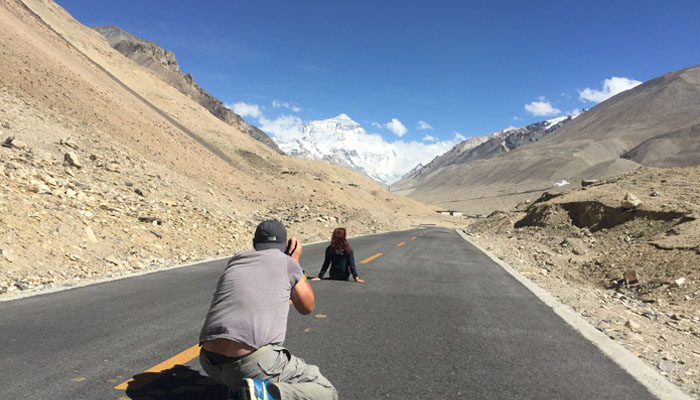 Taking photos on Our Everest Base Camp Journey in Summer Time.

The rain at EBC may come almost daily, but it is not the heavy torrential downpour of the monsoons in other areas of Southeast Asia. The rains come in short bursts or fast-ending showers that normally occur in the late afternoons and evenings, and even overnight in many cases. And while it may rain for a short spurt I the day sometimes, after the shower is over, the weather seems brighter and clearer, always followed by bright sunshine as the rainclouds move away again.

Temperatures at the base camp can be as high as 16-17°C during the daytime, dropping to around 6-8°C at night, which is warm for an area at such a high altitude.

You may think that it is not possible to visit EBC in the winter months due to heavy snowfall and arctic temperatures. However, that could not be more wrong. Temperatures do drop dramatically in the winter months from December to February, but not so much that you will freeze to death in your sleep. On average, temperatures through winter range from around 4°C to 7°C during the day, and can get as low as -17°C at night, especially in the coldest month of January. 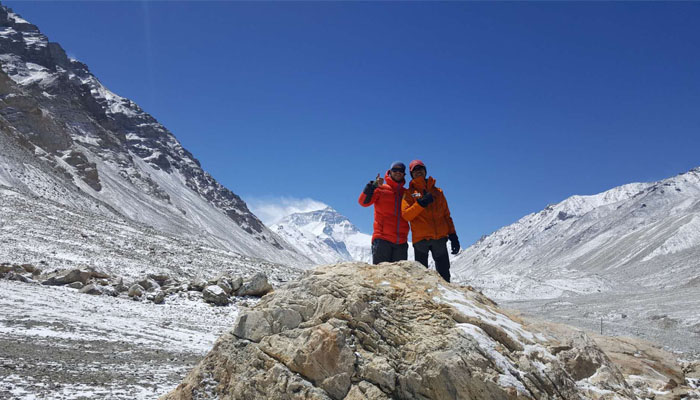 EBC at Winter has its own unique charm.

However, while the nights are cold, a good sleeping bag and protective tent, and some decent warm clothing can keep the cold out while you sleep, and thousands of people have stayed in the monastery guesthouse at Rongbuk, next to the base camp, at night in winter. And the sunny, bright weather in the daytime makes it feel much warmer than the temperature would suggest.

The main advantage of the winter tour to EBC is the great clear weather, as well as the lower tourist numbers that make the base cap a lot less crowded than in the peak months of summer. And fewer tourists mean discounts on accommodation and fares for your lifetime Everest Tibet trip, so for those on a budget, it is the perfect time to go. And winter at EBC has its own unique charm that will leave you breathless.

Clothing for Visiting Everest Base Camp

The clothing you will need for a visit to EBC in Tibet varied, depending on the season that you are traveling in. However, that said, it is advisable to make sure that you bring some warm clothing throughout the year, as the weather around the mountain is highly unpredictable. The summer months are warm enough to not need warm clothes in the daytime, but with temperatures at night dropping to around 6°C, warm sweaters are still necessary. For the rest of the year, you will need to have warm clothing, and for the winter months especially, thermal underwear and thick arctic-fleece jackets to keep out the cold. 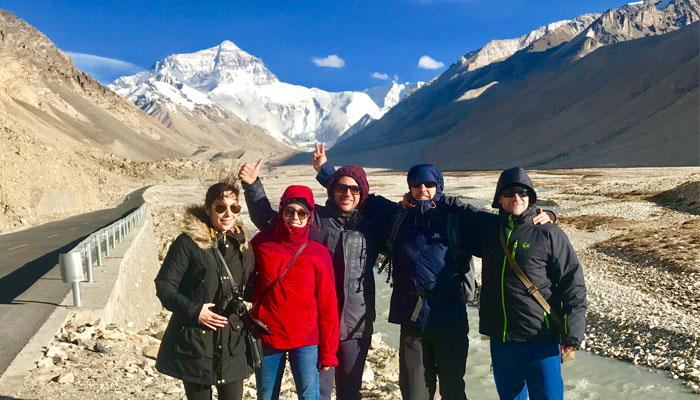 Bring some warm clothing at any time travel to Everest Base Camp.

For the colder months, it is better to bring many thinner layers to stay warm, which works better than one or two thicker sweaters, and helps to trap body heat between the layers. Thermal underwear can be very useful, and you should make sure you bring a warm hat, scarf, and gloves. Sunglasses are also a necessity, no matter what time of year you are traveling, as the bright daytime sun can be harsh to the eyes in the thinner atmosphere. Sun block is also required, as the same thin atmosphere also increases the amount of UV radiation that reaches your skin. For cold weather, bring a warm woolen or fleece hat, and for warm weather, bring a wide-brimmed hat to keep the sun off your head.

While the best time to visit EBC in Tibet may be in the spring and autumn, from April to May and September to October, this amazing destination on the very edge of the plateau can be visited throughout the year. Choosing the right time to travel to EBC depends on you, and when you want to come. For some, the best time is when it is warmest, while others will want to take advantage of the lower costs of a winter trip. Rest assured, whatever time you decide to come is the right time to visit the world’s highest mountain - Mount Everest.