Tibet Weather in December: Weather Guide on Travelling to Tibet in December

December is the beginning of winter in Tibet. The temperature keeps cooling down compared with November, but it is not bitter cold as people usually think. The large temperature difference between day and night is the main weather feature of this month. It is a good time for a tour with fewer tourists and lower traveling costs. Check to know more about travelling Tibet in December.

Weather in December is usually sunny, dry, and relatively comfortable for visiting. The rainfall hardly occurs to Tibet, but occasionally snowy in December. Tourists do not need to worry about the train. The daytime temperature is around 7℃ to 12℃, while it would drop to -10℃ in the evening. Tibet average temperature in December is about 3℃.

Where to Visit in Tibet in December?

December is in the low season of tourism, not only because most people mistakenly think it’s too cold for visiting but also because it is the end of the year when there is no traditional holiday. However, there are still many foreign travelers getting to Tibet because of Christmas. Visiting Lhasa, Shigatse, and Everest Base Camp is highly suggested. And for northern and southern Tibet, such as Mt. Kailash and Lake Namtso would be much colder or blocked due to heavy snow in December.

Compared with northern cities in China like Changchun and Harbin, the Lhasa climate in December would be much warmer in the daytime. The average daytime temperature is 10℃, and -7℃ in the night. Even the temperature in Beijing is about 4℃ to 8℃ lower than in Lhasa, which makes Lhasa is a good choice for traveling. 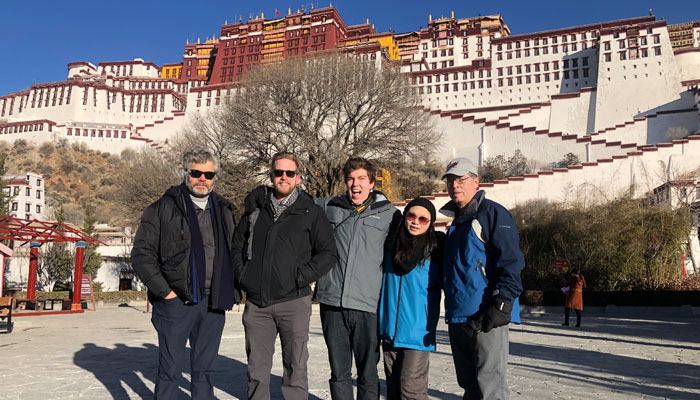 Visit the Ppotala Palace in the sunny Lhasa in December

As the center of politics and culture, Lhasa is also the first choice for most travelers. It has many attractive places, such as Potala Palace, Jokhang Temple, Barkhor street, Sera monastery, etc. Strolling among temples, basking in the sun, and enjoying Tibetan sweet tea are good ways of traveling in Lhasa. Without the crowded tourists, you do not have to wait in line for a suburban temple. You can see the original simple and beautiful face of Lhasa, like the gloomy corridor and the path under the sun. Or, you can even hear the low chanting voice of monks. When visiting Lhasa in December, it is suggested to wear sweaters, down jackets, hats, sunglasses etc.

The climate of Yamdrok Lake is dry, windy, and sunny. The average daytime temperature is 6℃, -9℃ in the night. The point is the wind in December is much stronger than in November, so tourists should wear a scarf, hat, and gloves to keep warm at the lakeside. It might snow in December, so sometimes part of the lake will freeze. 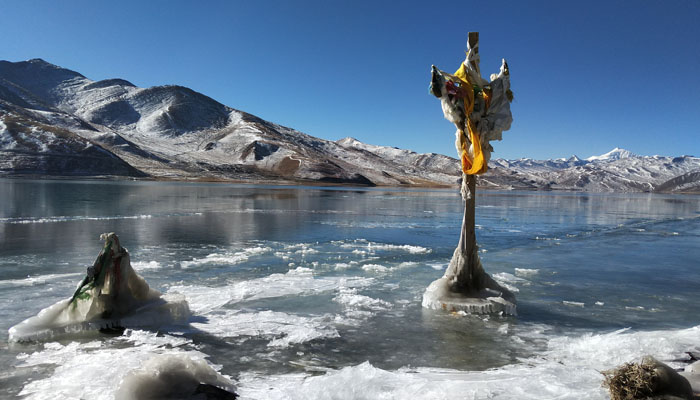 Yamdrok Lake is very special quite ice blue in winter.

Of the 3 holy lakes in Tibet, considering Namtso lake starts to freeze and Lake Manasarovar is around -10℃ in the daytime in December, Yamdrok Lake becomes the first choice in the 3 lakes. It is also the largest inland lake in the northern foothills of Himalayas. Many tourists’ first impression of Yamdrok Lake is quietness and blue. It shows azure blue in spring, milk blue in summer, navy blue in autumn, and a very special quite ice blue in winter. It is suggested to travel from Lhasa to Yamdrok Lake, to enjoy a comfortable trip within a week. However, because of the strong wind, sometimes tourists have to go back to the car to avoid it when they get off and take the picture.

The climate of Shigatse is quite like that in Lhasa, being dry, sunny, with a very blue sky. Average daytime temperature is 9℃, and it drops to -12℃ in the night. When touring Shigatse, it is recommended to wear thick sweaters, down jackets, hats as well as sunglasses and so on. 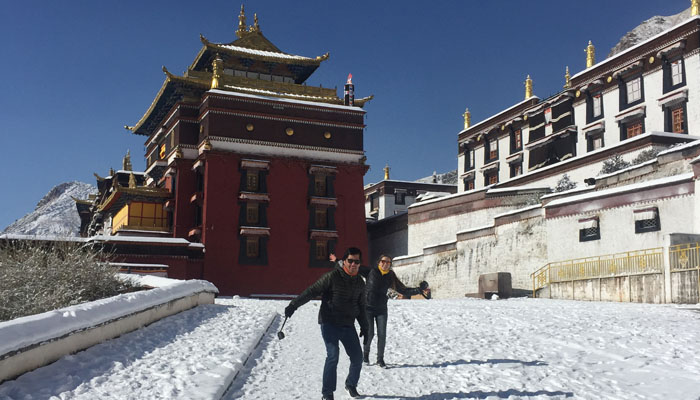 The Shigatse area is quite big, and the city is the second-largest city in Tibet and a place full of humanity. In Shigatse, Pelkor Monastery, Tashilhunpo Monastery, Sakya monastery are recommended to visit. Especially the Tashilhunpo monastery. It is a symbol of the Gelugpa monastery, the largest one of the Gelugpa sect in Rear Tibet, a palace for successive Panchen. The whole building complex covers an area of about 300000 square meters, it is also one of the birthplaces of Tibetan Buddhism. The world’s largest gilded bronze Buddha is also in the monastery.

It is still suitable to trek Everest Base Camp in early December. Everest Base Camp climate in December is frigid, windy, icy, sunny, and hard to see rainfall. Besides, it will inevitably snow from December to February. Days would be warm if the sun comes out. EBC daily max temperature is 6℃and min temperature is -15℃. The wind speed would reach a speed of 14 kilometers per hour. Clear weather in Everest Base Camp would give you better visibility to see the peak of Mount Everest. 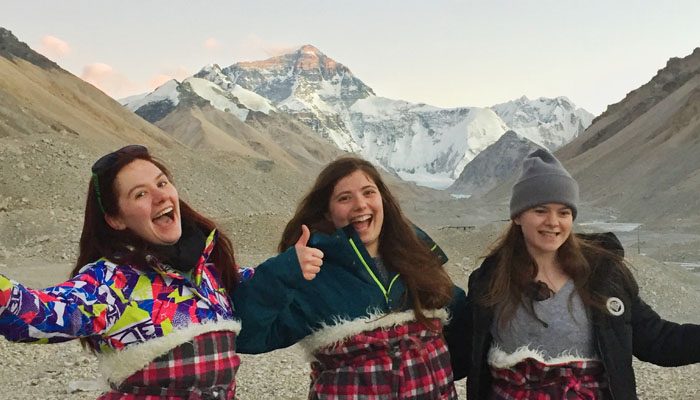 EBC belongs to the snow mountain scenery, it is a good time to visit EBC in winter. Thicker ice, wider snow line, higher visibility, tourists can see the real face of Mt. Everest more clearly and comprehensively. Especially when the orange sunlight shining on the top of the mountain, people will feel warm even the weather is cold. But sometimes the roads to Mount Everest Base Camp and Lake Namtso may be shut down due to the harsh weather.

In December, the tent of EBC will be evacuated, so tourists can only stay overnight at Rongbuk guesthouse. Besides, there are eco-buses from the parking to Rongbuk in Everest National park, and there is no need to prepare alpenstocks for visiting Everest Base Camp. As a kindly reminder, preparing a warm sleeping bag in advance will help you to keep warm during the night.

Taking part in Tibet festivals is a good way to know Tibet religions and customs better. It is one of the best to have authentic Tibet travel experience.

The Lamp Festival is held on 25th October in the Tibetan calendar, and it is normally held in December of the solar calendar. It is the festival to commemorate master Tsongkhapa. The laymen and temples should prepare butter lamps a few days before the festival. Every Lama needs to prepare over 30 butter lamps. On that day, people will light these butter lamps in the evening.

Master Tsongkhapa was born in a Buddhist family. At the age of 16, master Tsongkhapa went from Qinghai to Tibet to studied Buddhism, he founded the Gelug in Tibetan Buddhism in the early 15th century. He passed away on 25th Oct 1419 of the Tibetan calendar in Ganden monastery. One year later, on his first anniversary of the death, it is said there was an auspicious sign. Countless colorful flowers floated down. Since then, every year on this day, people will light countless butter lamps for him.

What to Wear in Tibet in December?

It is wise to dress in layers with thermal underwear, woolen sweaters, and down coats. Bring mountaineering jackets, winter gear, scarf, and glove for higher places. Sun cream, sun hats and sunglasses are always indispensable. Besides, the weather is dry in December. It is better to bring lipstick, face cream and skin lotion. Trainers and outdoor shoes are required as well.

Since December is in the low season, with fewer tourists and more local Tibetans around, you would find that Tibet is not noise as in Summer. Furthermore, you can also get better deals of air tickets, entrance fees, accommodation and transportation while traveling to Tibet in December.

Be the First One to Comment "Tibet Weather in December: Weather Guide on Travelling to Tibet in December"