Tibet Weather in July: Weather Guide on Travelling to Tibet in July

July may see more rain in terms of total millimetres than most of the other months of the year, but this summer month is one of the best times to travel in Tibet. July is one of the warmer months of the year, with reasonably comfortable temperatures and dry days with clear skies. And for those planning a unique summer vacation, you could not choose a better month for heading off to Tibet.

How is Tibet Weather in July?

July is one of the best months for touring Tibet. As it enters monsoon season from mid-late June, Tibet’s climate and weather become warmer and relatively humid. Luckily, it often rains at night and remains sunny in the day. Sometimes, the heavier rainfall can make some roads hard to pass through, and it has been known to wash out some of the older dirt and gravel roads in some places on the plateau.

Tibet temperature in the daytime normally reaches up to around 23℃ to 26℃, while it can drop to 9℃ or 10℃ at night. The average temperature across the plateau is normally about 18℃. Generally speaking, Tibet weather in July is pleasant, hot and rainy.

Best Places to Visit in Tibet in July

The largest lake in the Tibet Autonomous Region, and the second largest in China, Lake Namtso is renowned in northern Tibet as the “Heavenly Lake”, and its Mongolian name means just that. Temperatures are much more comfortable in July, with highs of around 15°C and nightly lows that now only drop to around 3-4 °C.

As one of the best options for travel to outlying location in the heights of summer, Lake Namtso is an astounding sight, surrounded by the rich lush plains of the Changtang Grasslands. Sitting snugly in between the yak-covered prairies and the Nyenchen Tanglha Mountains, a night at the lakeside is also a great way to explore more of the plateau, and see the starry night sky from your campsite.

Lake Yamdrok is considered to be one of three sacred lakes in Tibet, along with Lake Namtso and Lake Manasarovar. Lake Yamdrok, which lies to the southwest of Lhasa, is on the way to Shigatse on most tours of Tibet, and you get a unique opportunity to marvel at the grandeur of this sacred lake. 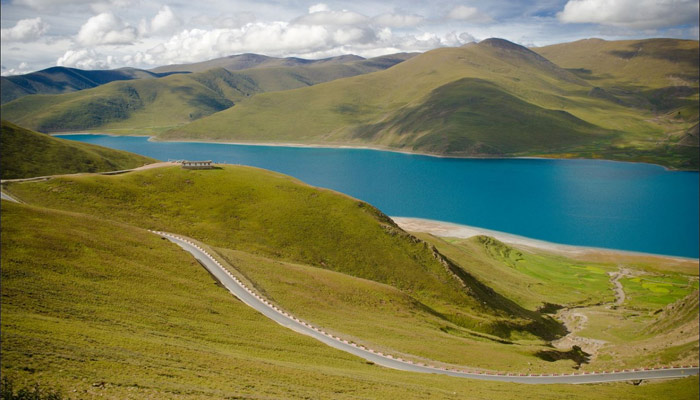 Under the blue sky and white clouds, we drive through green mountains towards Shigatse in July.

Lake Yamdrok, in Shannan Prefecture, only sees around half of the month as clear days, with rains making the other days of the month rather cloudy. However, the rains are spread out for the 100mm of rainfall throughout the month, so it is not too heavy to make your trip uncomfortable. Temperatures around the lake usually reach up to around 18°C, with lows dropping to just 10°C at night.

Mount Everest is the world’s highest mountain, and there is no feeling as thrilling as standing in the shadow of this outstanding peak at the famous Everest Base Camp (EBC). As one of the most popular tourist destinations in Tibet, July is considered to be one of the best times to visit the Mount Everest, though it is not always considered the best month for viewing the summit. Low-lying clouds can sometimes cover the peak, making it impossible to see in the height of summer.

While the rains around EBC may be getting heavier in July, you can also see an increase in temperatures, reaching up to as high as 22°C during the day, prompting the need for more sun block and your sunglasses. Most of the rain at the mountain base camp site does fall in the evenings and overnight, so hampers the trip to the site very little. Night-time lows can still drop to around 4°C, though, so prepare some warmer sweaters for the evenings, and your raincoat.

Mount Kailash and Lake Manasarovar are the two remote Tibet travel destinations with strong flavours of mystery and legend. With huge connections to Tibetan Buddhism, including being the site of the famous battle of Milarepa and Naro Bon-Chung, Mount Kailash is revered as sacred in four religions, and is generally believed to be the earthly representation of the legendary Mount Meru, the centre of the Universe. The mountain is also the most arduous and toughest trekking destination in Tibet. As one of the most outstanding hikes on the planet, trekking Mount Kailash will take three days to complete the 52 km kora route. 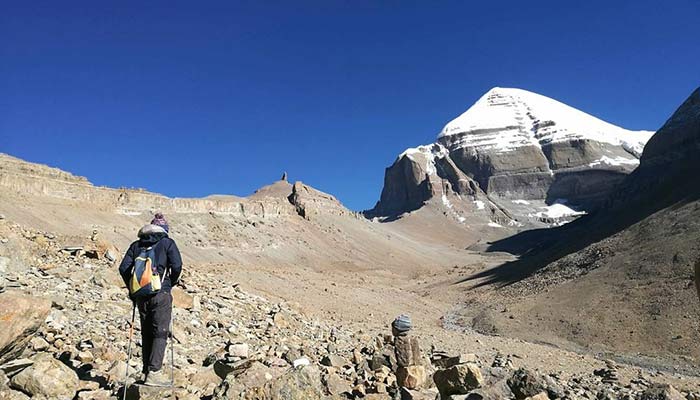 Lake Manasarovar has similar legends surrounding it, including being believed to be the place where Maya Devi conceived Gautama Buddha. It is also believed that the waters of the lake, when drank or bathed in, can absolve one of the sins of an entire lifetime, which makes it a popular pilgrimage destination for Hindus and Buddhists. The kora route around the lake is longer than most, and takes around 3-4 days to complete at an average pace.

In general, the weather in the area of Lake Manasarovar and Mount Kailash in July is relatively warm, with temperatures reaching up as high as 22°C during the day. Sun block and sunglasses are necessary, though you may need a warmer sweater when the temperatures drop to around 8°C at night. The area can see as much as 190mm of rain throughout the month, and more than half of the days are cloudy and damp, with heavier rains falling towards the end of the month.

Tibetan Festivals to Experience in July

As one of the most important festivals held at Ganden Monastery, just outside the city of Lhasa, throngs of pilgrims would gather together at the monastery during this three-day festival. 23 thangka paintings would be hung on the wall outside the monastery for their worship throughout the period of the festival.

The festival is held on the 15th day of the sixth month in the Tibetan calendar, and is held to honour the memory of Je Tsongkhapa, the founder of the Gelug tradition of Tibetan Buddhism. The pinnacle of the festival is the unveiling of the giant thangka, which stands more than 150 feet high and over 200 feet wide.

Dating back to the early days of the Gelug Tradition in Tibetan Buddhism, the Shoton Festival has its beginnings in the tradition of giving milk curds to the monks after their forced fasting and segregation from the world. On the orders of Tsongkhapa, the monks would spend 100 days in summer in seclusion, preventing them from harming any living creatures, and fasting while they prayed and meditated.

At the end of the period, the people would give the emerging monks milk curds to help them regain their strength and as thank for their months of sacrifice. As time passed, this became yogurt, and is known today as the Yogurt Festival. Featuring the unveiling of a huge thangka at Drepung Monastery, the most prestigious events of the festival are held in the grounds of Norbulingka, where the people make merry and eat copious amounts of yogurt. 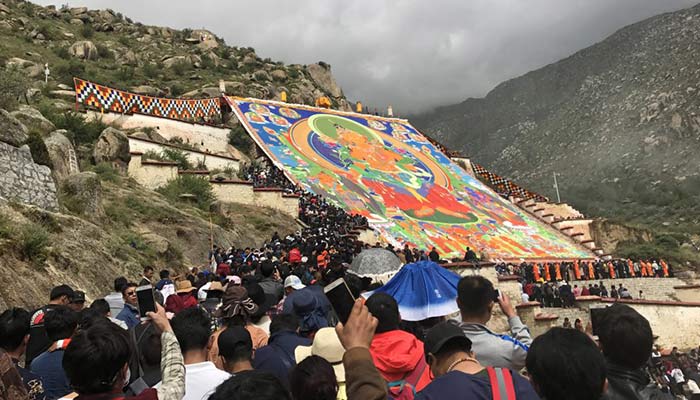 Monks unveil a huge thangka at Drepung Monastery to celebrate the Shoton Festival in July.

What to Pack for Touring Tibet in July

T-shirts and trousers are fine for daytime travel in Tibet in July, but you may need to apply some sun block, as the sun can be bright. Always protect yourself from sunburn with sun cream, sun hats and sunglasses. It is also recommended that you bring a thin jacket or coat for the nights, as some parts of the plateau still feel a little chilly. Rain gears are highly recommended, and you will not find a single destination in Tibet that does not see some rain in July. And for those that are going trekking around Mount Kailash, a good pair of sturdy hiking boots are a major necessity.

July is a wetter month of the monsoon, but not the wettest in most of the region of Tibet. But while rains may be more common than in May and June, you will still find plenty of sunny bright days to travel around the region and enjoy the warm sunny weather that this high-altitude land has to offer in the summer. So if you are planning a trip to Tibet, July is one of the most outstanding and beautiful times of year in this plateau region at the Roof of the World.

Be the First One to Comment "Tibet Weather in July: Weather Guide on Travelling to Tibet in July"