Tibet Weather in June: Weather Guide on Travelling to Tibet in June

While it may be the start of the monsoon season, June is a great time to travel in Tibet. One of the warmest of the summer months, a trip to Lhasa and the Tibetan plateau in June is well worth taking, even if it can get a little busy. So for the best places to head to in June and a run-down on the weather, our experts have all the information you need.

How is Tibet Weather in June?

The weather in June is generally warm, with temperatures at their highest for the summer months. June is one of the major monsoon months of the year in Tibet, and it can get a little wet in certain parts of the plateau. However, with most of the rain falling in the evening and overnight, this rarely becomes a problem for tourists in the region.

Top Places to Visit in Tibet in June

With gentle sunshine and mild breeze, Tibet climate and weather in June are comfortable for many outdoor activities such as walking around Lhasa city, trekking EBC or Mount Kailash, and much more. And this amazing plateau region has so many places to visit, you will need to keep coming back again and again to visit them all.

Lhasa, the capital of the region, is a city that can be visited all year round. However, June is Lhasa is a particularly stunning time of the year, as the monsoon rains are starting to turn the landscapes around the city into a lush green wonderland. For anyone planning a tour of Lhasa in June, there are some amazing sights to be seen, from the Potala Palace and the Jokhang Temple to the pilgrims walking the kora around Barkhor Street, and the stunning monasteries of Drepung and Sera. 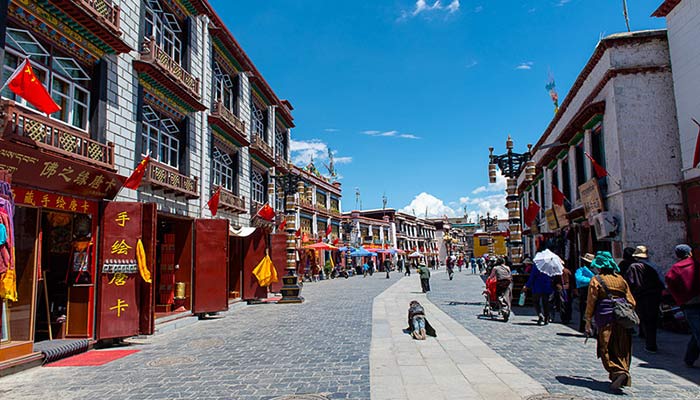 Take a stroll around Barkhor Street to encounter the pilgrims walking the kora.

The weather in the area of Lhasa in June is one of the warmest of the year, and from here, temperatures begin to drop towards autumn. Overall, you can normally expect temperatures to reach as high as around 22°C, with lows dropping to only 9°C at night. The month does tend to get wetter as you move into the latter part, but this is the ideal time to travel, before the heavier rains come in July and August.

Lake Namtso is the largest lake in Tibet, though not the largest on the Tibetan plateau. One of the most sacred lakes in Tibetan Buddhism, the lake is known in Tibet as the Heavenly Lake and lies on the boundary between Lhasa and Nagqu, in Damxung County. One of the most sacred pilgrimage sites in this part of Tibet, it is not uncommon to see pilgrims walking the long kora around the lake. And at this time of year, when the skies are clear at night, you can get an amazing view of the multitude of stars in the night sky.

June is also the start of the summer monsoon season at Lake Namtso, but is one of the best times of year for visiting the lake. The surrounding landscapes are lush and verdant after the first rains of the summer, daytimes are warm with temperatures of up to 14°C, and this is the first month of the year where the nights do not drop to below freezing.

Lying on the southern edges of the Nyenchen Tanglha Mountains, to the south of the Yarlung Tsangpo River, Tsedang is the fourth largest city in Tibet, and lies in the area of Shannan that is known as the “cradle of Tibetan civilization”. This ancient city was the original seat of the Tibetan Empire, prior to its move to Lhasa in the 7th century, and is still the centre of Tibetan history and civilization. The area is also home to some of Tibet’s oldest historic sites, including Yumbulakang, the palace built for the First King of Tibet, Nyatri Tsenpo, in the 3rd century BC, as well as the famed Samye Monastery, the first monastery in Tibet.

It is a good time to visit Tsedang in Shannan in June, since temperatures there generally only reach up as high as around 16-17°C during the day. Nights do not drop as low, though, and you can expect lows of only around 8°C at night. However, with only a few days of rain in the month at this early part of the monsoon, this is a good time for trekking in the area, with clear skies most of the month and lush green landscapes. 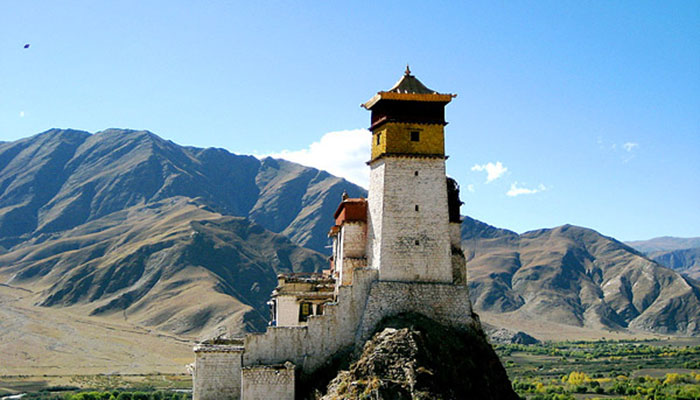 June is a good time to tour Tsedang in Shannan, the “cradle of Tibetan civilization".

June in Nepal is actually one of the wetter months of the year, and the monsoon is a lot heavier in Kathmandu in June than anywhere in Tibet. However, this is a good time to take the trip from Lhasa to Kathmandu across the plateau. Most of Tibet is relatively dry, compared to the lower areas of Nepal, and even the Gyirong Valley does not yet see much rain.

While the plateau sees relatively warm temperatures in June, Kathmandu is much warmer, with daily highs of up to 28°C, and lows of only 19°C at night. A stark contrast to the 15°C daytime temperature of the Gyirong valley area, which drops to around 8°C at night.

Everest Base Camp and Mount Kailash appeal to hundreds of thousands of tourists every year. The monsoon starts from the middle of June and it is still fine for trekking in Tibet in early June. And while EBC may only see a little rain in June, Mount Kailash sees even less, lying further north in the far Ngari Prefecture of Tibet. Temperatures at EBC can reach up as high as around 20°C during the day, while the kora route around Mount Kailash can also see temperatures a little higher, around 19°C. The strong winds around the mountains have little effect on the bright warm sunshine, and the lush valleys make for perfect trekking trails at this time of year.

Tibetan Festivals to Experience in June

The Tsurphu Cham Dance Festival is a popular local festival at the Tsurphu Monastery near Lhasa which is held every year in around the early part of June. The main feature of the festival are the famous Cham dances, performed by monks and lamas in colourful costumes and hand-crafted masks. The dances were originally developed as a teaching method for the monks, to show examples of morality and compassion in Tibetan Buddhism.

The Saga Dawa Festival is one of the greatest festivals in Tibet, and is held every year on the 15th day of the fourth month in the Tibetan calendar. The largest event is held at the base of Mount Kailash, the sacred mountain in Ngari Prefecture in the northwest of Tibet, which is deemed to be the most sacred mountain on earth. After the variety of religious ceremonies to commemorate the birth, death, and enlightenment of Buddha, the pilgrims usually head off around the 52-kilometer kora route around the mountain. 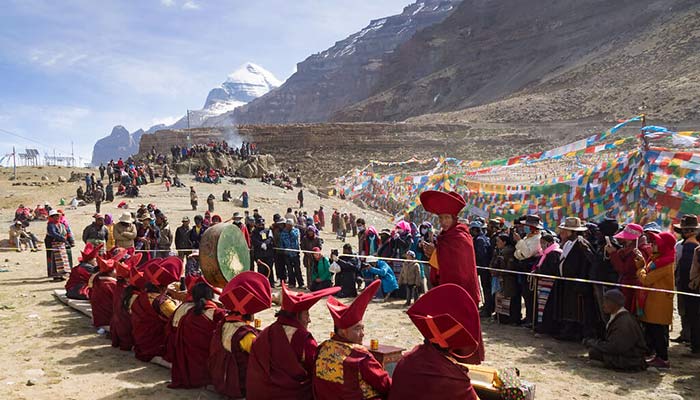 Saga Dawa Festival held in June is one of the greatest festivals in Tibet.

What to Wear for Touring Tibet in June

Tibet weather in June varies greatly between day and night. You would feel comfortable in shorts while visiting lower places in Tibet like Lhasa and Nyingchi at daytime. But it’s still advisable to cover yourself well to avoid sunburn. If you plan to overnight at Lake Namtso or EBC, mountaineering jackets and down coats are still recommended. Sun cream, sun hats and sunglasses are absolutely needed while touring Tibet in June.

June is one of the best months for traveling to Tibet, as you get the warmth of the early summer combined with the lower amount of rain that falls in this pre-monsoon month. As one of the best times for hiking around Mount Kailash or taking a trip to Lake Namtso, this is definitely one of the most outstanding times of the year for the beautiful landscapes and lush verdant scenery on the Roof of the World.

Be the First One to Comment "Tibet Weather in June: Weather Guide on Travelling to Tibet in June"