Tibet Weather in May

May is undoubtedly one of the best months of the year to travel to Tibet, with its warm weather, clear skies, and bright sunshine. One of the top months of the year, this tail-end of spring keeps all the beauty that comes with the new beginnings on the plateau and merges them with the warmth that the oncoming summer promises.

Tibet Weather in May is Warm Enough

Average temperatures in May generally range at around 13℃, with highs of up to 19-21℃ and lows at night of only around 4-6℃. This warmer weather is the precursor to the hotter monsoon season that lies just around the corner, but is still cool enough to be pleasant and comfortable, without getting too hot or too cold.

Across the plateau, the weather is really starting to warm up as May rolls around, with even the colder region around the Kailash Kora rising up to above freezing at night. You may still find some colder areas at night that dip a little below freezing in the earlier part of the month, but by the time May heads into its latter part, the whole plateau has forgotten the sub-zero temperatures of winter for a while.

Top Places to Visit in Tibet in May

May is really the first month of the year where you can travel all across the plateau without getting cold, and is an ideal time to explore some of the more outlying areas of this vast region. It is also the perfect time to take on some of treks in Tibet, or enjoy the beauty of the Tibetan capital in the warmer month of the spring.

Lying around 120 kilometers to the north of Lhasa, Lake Namtso sits on the boundary of Lhasa and Nagchu, in Damxung County. This far north from the capital, the spring tends to come a lot later, and the lake has only recently finished thawing out from its winter freeze. Sitting between the high Nyenchen Tanglha Mountains and the vast open plains of the Changtang Grasslands, this is one of the few places that can still see nightly temperatures hitting below freezing (around -3℃) in the early part of May. However, these tend to warm up by the end of the month.

Daytimes around the lake are still a little chilly in the first weeks of May, and the highs reach up to only around 11-12℃. However, the bright sunshine and increased altitude from Lhasa make the air feel warmer, which makes the trip much more comfortable. You can expect a little more rain in the area around the lake, but rarely enough to make your Lake Namtso trip less enjoyable. A light rain on the surface of the lake is an unforgettable sight to photograph. 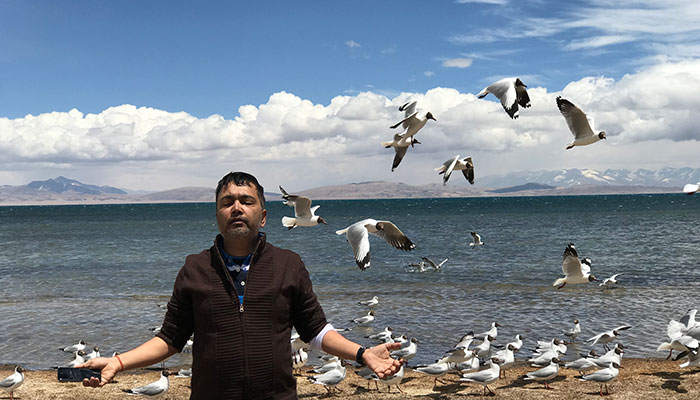 Namtso weather tends to warm up by the end of May.

The capital in the spring month of May is starting to become more popular, with more tourists traveling to Tibet as the season gets under way in full. Temperatures in the capital are warmer, ranging from lows at night of around 6℃ to highs in the daytime of up to 20-21℃.

This is the perfect time of the year to spend time touring Lhasa, the famous City of Sunshine, especially for the climb up to the iconic Potala Palace or to visit the sacred Jokhang Temple and walk the kora around Barkhor Street. The brighter sun brings out the pilgrims in higher numbers, and the warmer weather makes touring the city a true delight.

Out to the west, in Tibet’s second city of Shigatse, the weather is a little cooler still, but is a lot warmer than it has been all year so far. Highs reach up to around 17-18℃ during the day, with nights only dropping down to around 3℃. You will still need those warm sweaters this far west, but they are often useful throughout the year in the more remote areas of Tibet.

May is the ideal month to spend some time exploring Shigatse, which is often missed out by many tourists eager to reach Mount Everest. The city is home to the wondrous Tashilhunpo Monastery, which is the Seat of the Panchen Lama, the second highest incarnation in Tibetan Buddhism. A 15th century monastery built by the first Dalai Lama, the monastery is one of the largest in Tibet.

The famous Everest Base Camp (EBC) at the foot of the World’s Highest Mountain is the pinnacle of tours in Tibet for most people, and one of the most amazing sights on the planet. Standing in the shadow of Mount Everest, there is no better view than that down the valley towards the iconic mountain peak that stands a head and shoulders above the rest of the Himalayas, literally. 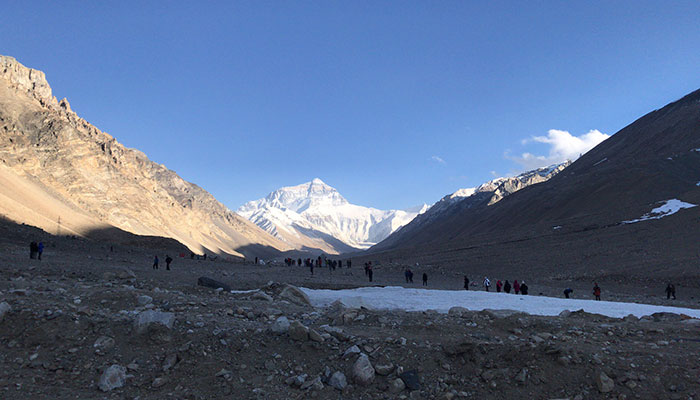 Tibet EBC in May offers sunny and clear skies for you to get wonderful views of Mount Everest.

The weather here in May can be cooler, and you can sometimes find that the nights can drop to around -1℃ in the first weeks of May. However, by the latter part of the month, these night-time temperatures have risen to above freezing, though only just. You can expect the daytime temperatures to reach up to around 15℃, and the weather is sunny and bright with clear skies and comfortable breezes.

EBC actually sees less rain than anywhere else in Tibet in May, which makes it a great time to take on the trek from Old Tingri to EBC or for the more experienced to tackle the arduous Everest Advanced Base Camp Trek.

Far out in Ngari Prefecture in northwestern Tibet lies the sacred mountain known as Mount Kailash, or Gangs Rinpoche in Tibetan. By the time May comes around, this cold and remote mountain region has finally warmed up for the spring, and is ready for the flood of tourists to tour the sacred Mount Kailash.

Temperatures around Mount Kailash in May generally range from around 1℃ at night to as high as 15℃ during the daytime, and the mountain sees little in the way of rain throughout the whole month. May is the month of the famous Saga Dawa Festival, which is most popular in the shadow of the sacred mountain.

A three-day kora trek around the sacred Mount Kailash, stretching out for around 52 kilometers from start to finish, May is the best time to try this trek, as the weather is ideal for hiking the high-altitude trail. Reaching heights of more than 5,600 meters, the trek is tough and not for the fain hearted. 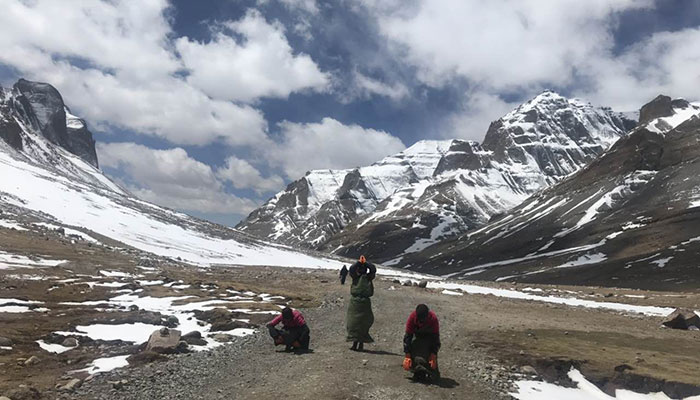 Appreciate the fabulous view of Mount Kailash during the three-day kora trek in May.

Tibetan Festivals to Experience in May

May sees some of the top festivals in Tibet coming around, including the famous Saga Dawa Festival, which is best experienced around Mount Kailash, and the incredible Cham Dance Festival at the Tsurphu Monastery.

Literally meaning “fourth month”, the Saga Dawa is one of the most important festivals in Tibetan Buddhism. A festival that really lasts an entire month, though the festivities are generally held on one single day, the Saga Dawa Festival celebrates and commemorates the Birth, Death, and Enlightenment of Gautama Buddha, which are all said to have taken place in the same month more than 2,400 years ago. The festivities and ceremonies generally happen on the 15th day of the month in the Tibetan calendar, which varies each year in the western calendar. 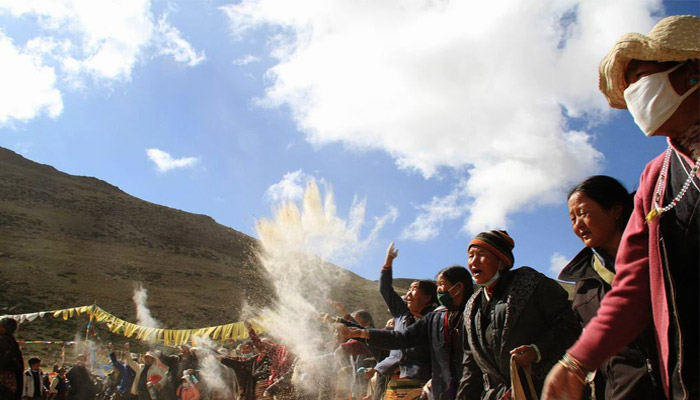 Local Tibetans are getting together to celebrate Saga Dawa Festival in May.

If you travel to Tibet in May, you can't miss the wonderful pilgrimage experience of Mt. Kailash during Saga Dawa Festival. The festival held at the foot of Mount Kailash is the most popular location for this epic event, and the ceremonies include the re-hanging of the prayer flags on the Tarboche Flagpole, plenty of burning juniper branches, kora walking around the ceremony site, and all followed by the pilgrims and tourists heading off around the mountain to walk the ritual kora in the shadow of Tibet’s most sacred pilgrimage destination.

It is said that any merits gained in the month of Saga Dawa are multiplied a thousand-fold, and pilgrims head for the sacred sites to perform the kora rituals and pray at the altars. People also give out alms to the needy and free animals to gain merits for their journey towards enlightenment.

Tsurphu Monastery lies around 70 kilometers to the west of Lhasa at an altitude of around 4,300 meters, and is the location of the famous Cham Dance Festival in May every year. Over 800 years old, this ancient monastery holds the festival on the tenth day of the fourth month in the Tibetan calendar.

The festival, which features a huge number of the amazing Cham Dances, is held to commemorate the deeds of the Indian guru, Padmasambhava, who spent many years teaching Buddhism in Tibet in the 8th century. The Cham Dances are all based around the deeds of Padmasambhava, and are performed by the monks of the monastery, in gaudy and colorful outfits with strange and often frightening masks.

What to Pack for Visiting Tibet in May

May is a much warmer month than any so far in the year, and there is less need to bring along lots of heavy warm clothing for the trip in May. You may find than warm sweaters and fleece jackets can be useful in Ngari, EBC, and Namtso at night, but for the most part, you can wear thinner sweaters and lighter jackets for much of the trip to Tibet in May. Overall, your packing list for May, depending on where you go, should include:

You can also bring along trekking poles, sleeping bags, etc., for those planning to trek in Tibet in May.

May is definitely one of the best months of the year to visit Tibet. You get the warmer weather without too much heat, but also without the wetter weather that is yet to come once the monsoon season hits in full. You may see some rain in certain areas towards the end of May, as June is generally the start of the monsoon season. But usually this is not much, and will not spoil the trip. So if you are thinking of the best month to come to Tibet, May is one of the top contenders throughout the year.

Be the First One to Comment "Tibet Weather in May"