Tibet Weather in November: Weather Guide on Travelling to Tibet in November

November is still suitable to go to Tibet for a comfortable and wonderful trip on the plateau. As dry season comes in, it seldom rains at Tibet in November. There are many sunny days with clear weather. Fewer Chinese tourists travel to Tibet in winter, so you would experience a more authentic Tibet in November and pay for tickets and rooms at a lower price. Check to read more about the weather guide on visiting Tibet in November.

How is the Weather in Tibet in November?

Tibet weather in November is generally dry and sunny. It is warm at noon time and chill at deep night. There is huge temperature difference between day and night. Tibet temperature at daytime is around 12℃ to 15℃, while it would drop to -5℃ at night. Tibet average temperature is about 6℃. There is less rainfall or snow fall during November, so the sky is clear during most of the time. The chance of seeing the peak of Mt. Everest is much higher than rainy season like July and August.

In early November, a short trek near lhasa with all tree leaves in yellow is quite beautiful. Travel to Tibet in November is a very economic option as it steps into off season, but the view of lakes and mountains under dry and clear weather is as beautiful as ever. Even local Tibetan would travel around Tibet during this season.

Where to Go in Tibet in November?

Coming to visit Tibet in November is quite budget wise for tourists, since during this time local government will offer promotion policies such reducing the entrance fee, and hotels will also be most likely providing great deals.

Lhasa weather transits from autumn to winter in November. The climate in November at daytime is similar to major cities in mainland China. It would be much warmer at noon, but drop below zero at night. Lhasa temperature at daytime is around 12℃ and the nighttime temperature would be as low as -4℃. As tourism drops gradually, you would find more local Tibetans around you while visiting Lhasa in November. 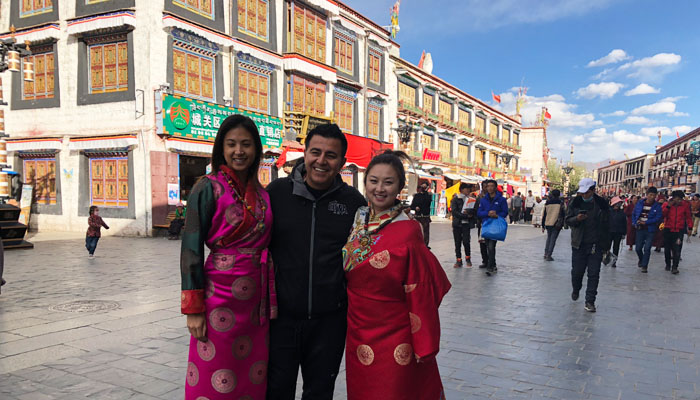 Wandering around Barkhor Street and photo with local Tibetan in November

Across the whole Tibet, Lhasa is always the first choice for most tourists. Potala Palace, Jokhang Monastery and Barkhor Street are the must-go places in visiting Lhasa in November. Red woofs, yellow and brown walls, yellow leaves, blue sky, white clouds, chanting monks, all make Lhasa seem like some place surreal in the world. Wandering around Barkhor Street, talking with local people in the teahouse, doing some light trekking at Ganden monastery in this season would totally relax yourself. Just remember to get good protection from the sunburnt and drink more water as it is one of the driest seasons for Tibet. Warm clothes are also need to be prepared for the cold night like October.

Shigatse is the second largest city in Tibet, and the weather is like that of Lhasa. It is sunny and dry in November with beautiful clear sky. Farming in Shigatse is very developed and the soil is quite fertile. Travel in Shigatse in November you will see large area of farmland piled with straw after the harvest. Farmers begin to get relaxed since November with a big harvest. Tashilhunpo monastery is a must-see site in Shigatse as well as the famous free market. The recommended travel route is from Lhasa to Gyantse to Shigatse, following a classic central Tibet tour itinerary. 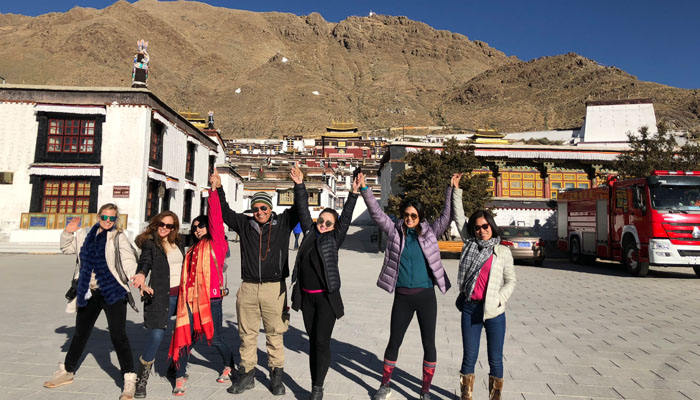 Yamdrok Lake is very beautiful with deep blue coat in dry and clear weather during November. Yamdrok lake at this time just like mature and beautiful lady, lying there like a goodness, poised and serene. It could be quite windy though sometimes but the lake is always so calm. The temperature is about 5 below 0 ℃ to 6℃. The lake is of the same importance as Namtso lake and Manasarovar lake. The 3 lakes are the three most important holy lakes in Tibet. Yet only Yamdrok lake is suitable to visit throughout the whole year, unlike the other 2 lakes. You can travel from Lhasa to Yamdrok Lake, in a convenient way. 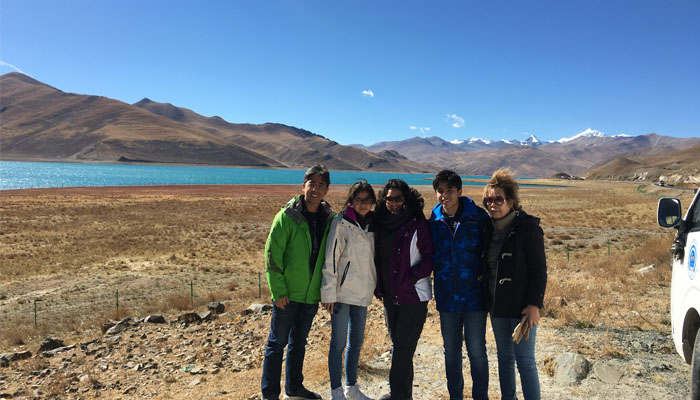 Mount Everest Base Camp in November has sparse rains and abundant sunshine. Thanks to dry weather, it’s likely to see the clear peak of Mount Everest in the day and stars sparkling under the blue sky at night. However, winter in Tibet would be frigid, snowy, and windy. The daytime temperature is around 10℃ and the nighttime temperature would decrease to -10℃. The wind would reach a speed of 14 kilometer per hour. 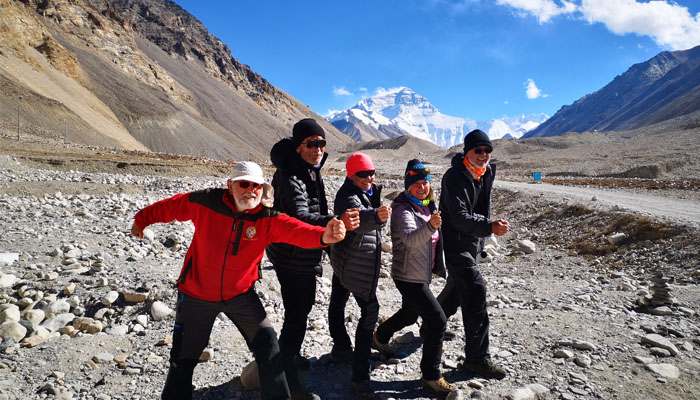 In November, Mount Everest shall always present its beautiful complete looks. It is not the peak season for explorers and mountaineers to trek Everest Base Camp. But for those who really understand the weather and do not mind coldness, probably travelling to Mount Everest Base Camp in November would be their favorite choice after comparison.

It’s so amazing to see numerous stars sparkling under the blue night sky on Qinghai-Tibet Plateau. Nothing could make you feel so amazed with a very clear view of Mt. Everest with the beautiful night sky with stars. Like October, tent house at EBC would not be available because it would be too windy and cold to stay in the tent. In November, tourists need to be careful for altitude reaction as the oxygen occupancy in the air during this season is relatively small compared to the other seasons. The temperature night could drop to 10 below 0℃, so warm clothes, winter outfits , anything can bring you warm are definitely required.

Tibetan Festivals to Experience in November

Taking part in Tibet festivals is a good way to know Tibet religions and customs better. It is one of the best to have authentic Tibet travel experience.

Lhabab Duchen Festival is a Buddhist festival celebrated to observe the Buddha's descent from the Trāyastriṃśa heaven down to earth. Lhabab Düchen occurs on the 22nd day of the ninth lunar month according to Tibetan calendar and widely celebrated in Tibet and Bhutan. According to legend, the Buddha ascended the Trāyastriṃśa heaven temporarily at the age of 41, in order to give teachings to benefit the gods in that desire realm, and to repay the kindness of his mother by liberating her from Samsara. During this day, positive or negative actions are multiplied 10 million times. You can feel the atmosphere of the festival while tour in Lhasa.

Palden Lhamo Festival is celebrated on the 15th day of the 10th month of the Tibetan lunar calendar. On this day, local Tibetans pay homage to Palden Lhamo, a wrathful three-eye deity who is regarded as the principal protectress of Buddhists and Buddhism. Palden Lhamo is particularly venerated by the Gelug school of Tibetan Buddhism. During the festival, a special statue of the frog-faced Palden Lhamo is shown to the public. People queue up for hours to offer Khatak (white scarf) and Tibetan barley wine to the statue at the Jokhang Temple in Lhasa. Other activities are also being held, such as bonfire dancing and drinking wine, to celebrate the Palden Lhamo Festival. Barkhor Street is the best location to experience this festival except bonfire.

What to Wear for Visiting Tibet in November?

November is suitable to go to Tibet for most of the places and you can also save a lot of time and budget by travelling to Tibet during this time. The dry and clear weather make peaks of snow mountain visible in most part of Tibet. Considering the climate, it is recommended to have your warm clothes well prepared. Sometimes the roads may also be shut down due to the harsh weather. Please contact us for any problem about your Tibet tour in November.

Be the First One to Comment "Tibet Weather in November: Weather Guide on Travelling to Tibet in November"