Tibet Weather in October: Weather Guide on Travelling to Tibet in October

October is the last month of Autumn before Winter stepping in, and most region of Tibet is suitable to visit during this month. While Tibet climate and weather become cooler, leaves and grassland turn from green to yellow. If you want to see a golden Tibet, touring Tibet in October would be a wise decision.

How is the Weather in Tibet in October?

October is one of the ideal months to travel Tibet. Tibet temperature in daytime is around 15℃ to 20℃, while it would drop to 2℃ at night. Tibet average temperature is about 10℃. As the monsoon faded away and dry season sets in, Tibet precipitation in October decreases sharply. In a word, Tibet weather in October is warm, sunny and dry.

Where to Go in Tibet in October?

As autumn comes in, Tibet weather in October is clear and temperature is cool. All the scenery here would give you a taste of autumn. It’s still perfect for visiting Tibet in October as it is a season of colors, trees are with golden covers like a fairy tale world.

Lhasa City and its Surroundings

Lhasa is always the first choice for most tourists. Potala Palace, Jokhang Monastery and Barkhor Street are the must-go places for visiting Lhasa in October. Red woofs, yellow and brown walls, yellow leaves, blue sky, white clouds, chanting monks, all make Lhasa seem like some place surreal in the world. 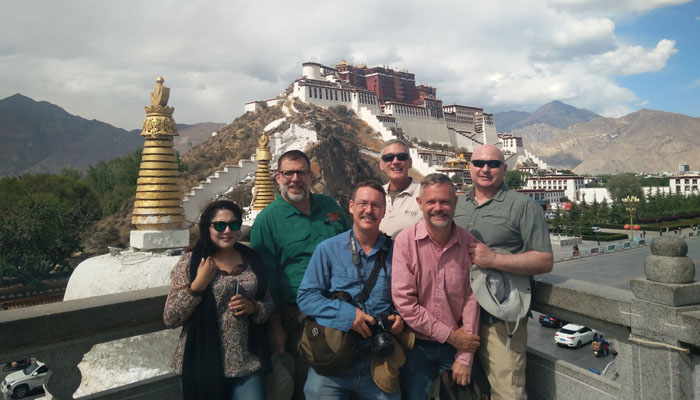 Wandering around Barkhor street, mingling with local people in the teahouse, doing some light trekking at Ganden Monastery or doing a short day trek for Papong ka to Sera in this colorful season would able to leave all trouble free. Just remember to get good protection from the sunburnt and need to drink more water as it is one of the driest seasons for Tibet. Warm clothes are also need to be prepared for the cold night.

Shigatse is the second largest city in Tibet, the weather here is similar to that of Lhasa. Warm, sunny and dry in October with almost no rainfall. Farming in Shigatse is very developed and the soil is quite fertile. Travelling in Shigatse during September, you will see people harvesting on the farm with big smiles. 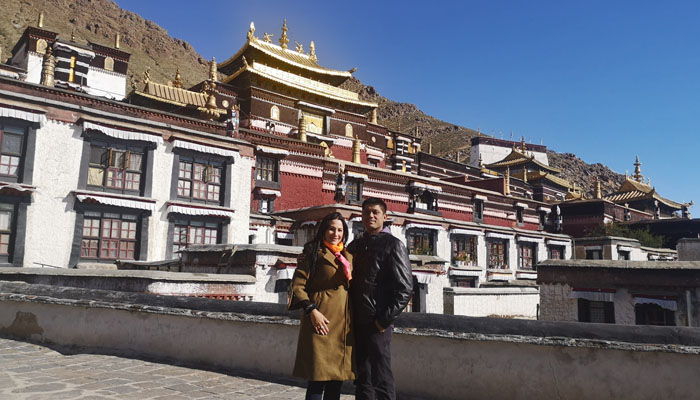 Apart from farming, animal husbandry is also prosperous in Shigatse. Tashilhunpo monastery is a must-see site in Shigatse as well as the famous free market. And if you want to explore this charm city of Tibet, take the route from Lhasa to Shigatse is the best choice.

Yamdrok Lake is featured with beautiful turquoise color, flickering under sunlight in October just like September, maybe a little windy than September. The temperature is about 3 to 20℃. Yamdrok lake is of the same importance as Namtso lake and Manasarovar lake. The 3 lakes are the 3 most important holy lakes in Tibet. Visiting Yamdrok Lake can be done throughout the whole year but the most beautiful season would be September and October. 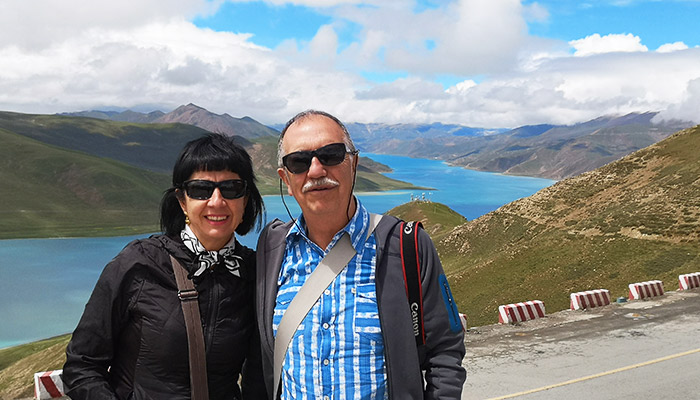 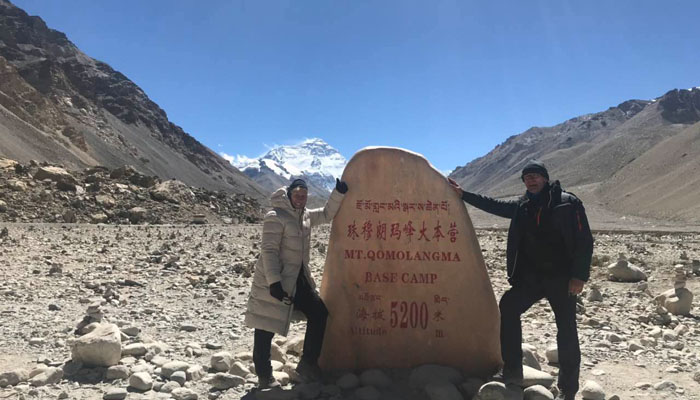 However, the tent house at EBC would not be available for October as it would be too windy and cold to stay in the tent. Still tourists need to watch out for altitude reaction. If you would like to have a special experience in October for Everest Base Camp, it would be a good try to take the trekking route from Tingri to EBC. Besides, you can also add a visit to Cho yo base camp which is around 100km away from the camp. 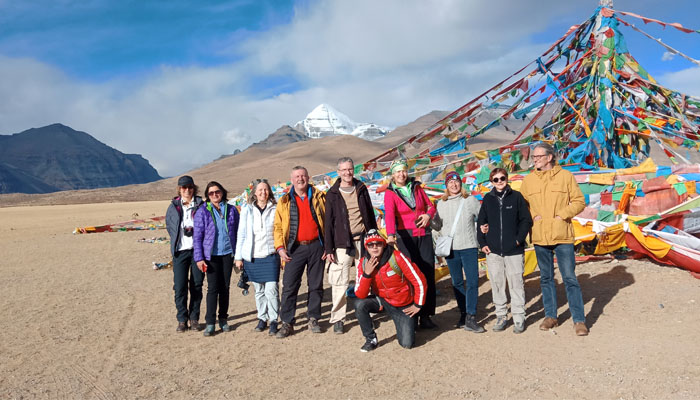 Trek for Mountain Kailash and lake Manasarovar in October is quite good because it is very dry and the weather is clear. A clear peak of the mountain seems only exist in the heaven could be found in the earth. The view of the clear blue sky at night with the peak of Mt. Kailash can take your breath away. Compared to September, October has also less tourist around so still many prefer October than September.

Trekking to Mt. Kailash and lake Manasarovar in October need to have sunglass wearing protecting from sunburnt or light flash from the snow. Wind proof clothes are recommend and need to bring very warm clothes for the night as it could drop to 5 to 7 below 0℃ for the evenings also day time temperate is still quite, may reach 18℃. After October, Mt Kailash would be not so suitable to go, so need to seize this month if you want to make the visit in the year.

What are the Popular Tibetan Festivals in October?

Taking part in Tibet festivals is a good way to know Tibet religions and customs better.

It’s said that Buddha's descent from heaven had happened on Sep.22nd according to Tibetan calendar. Normally in October. Since then, countless pilgrims would swarm into Jokhang Monastery and Barkhor Street and pray for greeting him again on that day. It is quite easy for tourists to experience this meaning day in Lhasa. 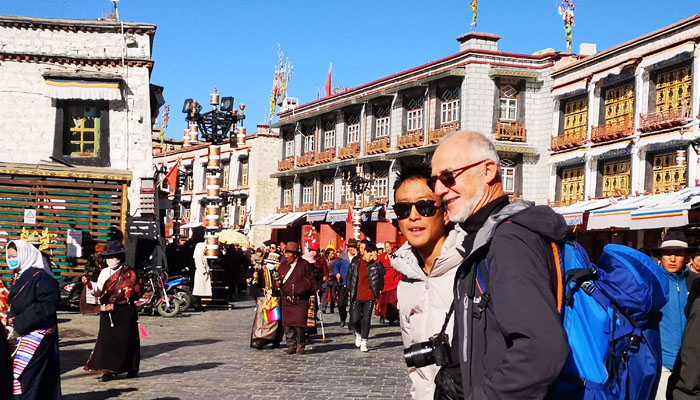 Ongkor Festival (August-September of Tibet Calendar, about 1 to 3 days)

Ongkor Festival with a history of more than 1500 years is held by traditional Tibetan farmers to express thankfulness to the Gods for good harvest. Ongkor is translated as circling around the edge of the fields in Tibetan language. It is popular among Lhasa, Shigatse and Shannan in TAR and take place between August and September in Tibetan Calendar (International calendar, normally in October). The exact date varies according to farming season. It’s held two or three days before harvest and lasts one to three days.

What to Wear When Touring Tibet in October?

As temperature varies greatly within a single day, it’s sensible to wear in layers for Tibet weather in October. You’d better bring warm clothes, sweaters and mountaineering jackets with you. Winter gear and gloves are needed for higher places. Sun cream, sun hats and sunglasses are always necessary. For trekking, tourists need to bring wind proof jackets and special care for eyes from flash of snow as late October might expect some snowfall already.

October is the month of colors, golden rich color, it is the time of year that Tibet full of memories and harvest, it is also the last month of autumn. Coming to Tibet in October is one of the best choices, as beautiful as September but less crowded except for the national holiday period.

As National Day falls on the first week of October, many Chinese tourists would swarm into Tibet on their seven days’ vacation. Thus, booking train tickets and hotels become more difficult than usual. If you plan to enter Tibet in October, please contact us for your Tibet tour in advance.

Be the First One to Comment "Tibet Weather in October: Weather Guide on Travelling to Tibet in October"