Everest Base Camp Tour in Nepal Side and Tibet Side

Sitting right on the border between Tibet and Nepal lies the world-famous Mount Everest, the highest mountain in the world. Known in Tibet as Chomolungma, and in Nepal as Sagarmatha, this massive mountain sits at 8,848 meters (29,029 ft) above sea level. Situated in the Mahalangur range, the international border between Tibet and Nepal runs over the summit point. On either side of the mountain are the Nepalese and Tibetan base camps, famous sites around the world as the places where the successful and unsuccessful attempts to scale the mountain started. The southern camp is situated in Nepal, while the northern camp lies in Tibet Autonomous Region, and both rudimentary campsites are used by mountain climbers on their way up and down the mountain. The south base camp is used for climbing the southeast ridge, while the north base camp is for those attempting the harder northeast ridge. 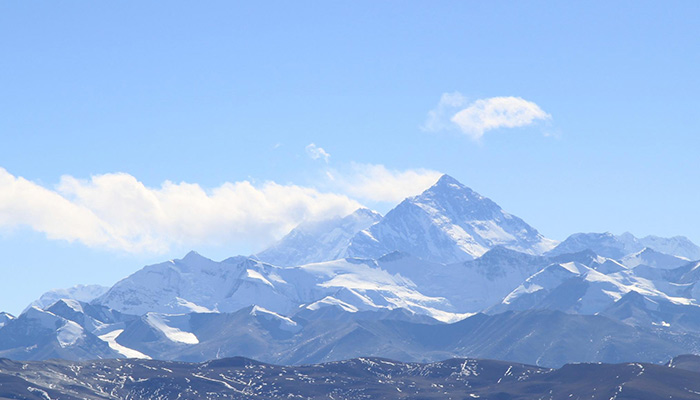 Mount Everest, the highest mountain in the world

The camp in Nepal is situated at an altitude of 5,364 meters (17,598 ft), while the Tibetan camp is slightly lower at 5,150 meters (16,900 ft). Supplies are shipped to the camps by Sherpas and porters using yaks and horses, although the Tibetan camp now has full road access direct to the site. The camps are normally used for climbers to acclimatize to the high altitudes for a few days before continuing their ascent.

One of the most popular treks in Nepal is the one that runs to the Everest Base Camp, and thousands of people follow the route each year, eager to get a glimpse of the lofty mountain. Trekkers normally fly in from Kathmandu to Lukla, before beginning the arduous trek to the camp. Although trekking to Lukla is possible, it is a long journey, and many prefer to save their energy for the hard trek to Everest. As there are no roads from Kathmandu to Lukla, the only way in is to fly.

The Trek to South Base Camp of Nepal

Around 40,000 people take the trek every year, and it is a strenuous 12-day hike that reaches altitudes of above 5,500 meters. On average the trekking covers between 4 and 8 hours each day, depending on the day’s stopping point along the route. 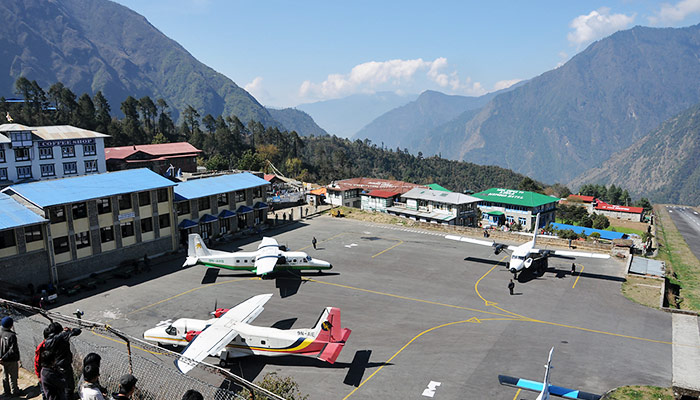 Starting at Lukla airport and trekking upwards to the Sherpa capital of Namche Bazaar, at 3,440 meters (11,290 ft). The trek follows the valley of the Dudh Kosi River, and it takes around 2 days to reach the village. The first night is spent after a relatively easy hike in the village of Phkading, 2,620 meters above sea level. From there it is a seven-hour trek the next day to the village of Namche Bazaar. The climb up to the village is steep and this is the point where the trek starts to become harder. The village is the hub for the entire area, and is a place where climbers can rest for a day before moving on. 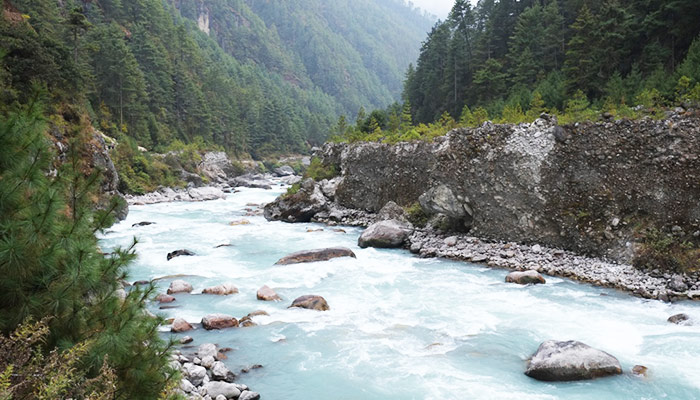 The trek follows the valley of the Dudh Kosi River

The next two days are spent trekking from Namche Bazaar to Dingboche, another village at 4,260 meters (13,980 ft), where they can rest for another day to further acclimatize. The first stop is after a good 7-hour hike to Phortse Gaon, which gives you an amazing insight into the lifestyle and culture of the Sherpas. Once you get above the tree line the next day, it takes around six hours to cover the 8km to Dingboche, as the altitude increases by over 600 meters along the route. Another day is spent resting and acclimatizing in Dingboche, and day hikes are available for those who have the energy to Amadablam base camp, Nagarjun Hill, and Chukkhung. 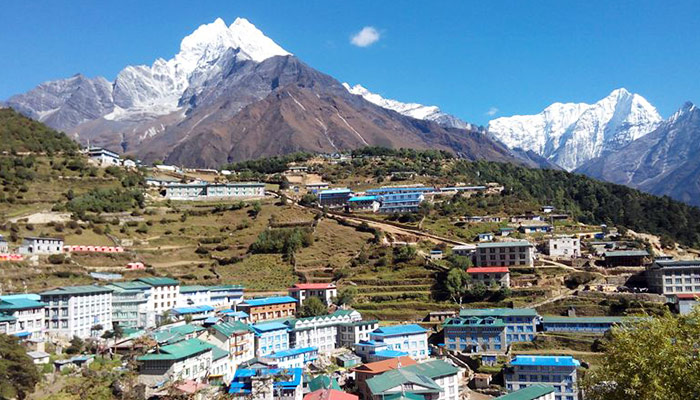 From Dingboche it is another two-day hike to reach Everest Base Camp, and the trail goes through Gorakshep, a wide, flat field below Kala Patthar and Mt. Pumori. Sitting at 5,164 m (16,942 ft), the Gorakshep frozen lakebed is covered with sand, and at its edge is the village of the same name, which is only inhabited from Spring to late fall. The trek stops for the night at Lobuche village, after a five-hour trek, and continues the next morning, covering the short distance to EBC, and spending most of the day there, before descending back to the lodges at Gorakshep. 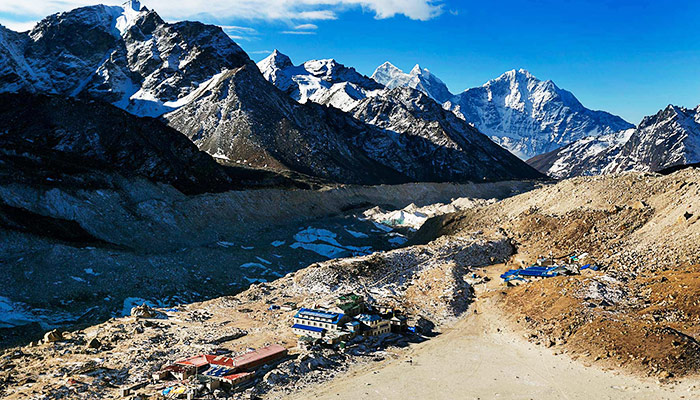 Gorakshep is a wide flat field below Kala Patthar and Mt. Pumori

After EBC, the route continues through to Kala Pattar, a peak at 5,545 meters that gives a great view of Everest nearby, as well as the peaks of Lhotse, Nuptse, and the other surrounding peaks. Then it is on to Tengboche, a village just four hours trek down the mountains, where you can stop and visit the stunning Tengboche Monastery and the Sherpa Heritage Foundation. The trail continues down to the small settlement at Monjo, before finally ending back in Lukla, before flying out for Kathmandu.

>> Join-in the most classic Nepal Tibet tours to enjoy the superb vista of Mt.Everest

The north base camp in Tibet can be more easily accessed than in Nepal, as there is a 100km stretch of tarmac road that leaves the Sino-Nepal Friendship Highway near Shelkar, to head south to the camp. Tibet actually has two base camps; the tourist base camp and the climbers base camp. The road ends at the tourist base camp, around 4km from the Rongbuk Monastery, where the camping site lies. You can spend the night in the local run tent in there. And get up early morning to enjoy the incredible sunrise of Mt. Everest at the hill of Rongbuk Monastery.

Getting to the base camp on the Tibetan side is one that is fraught with red tape, as visitors to Tibet are required to obtain a special permit, the Tibet Tourism Bureau Travel Permit, from the Chinese government in order to enter the region. Other permits are also required, the Alien Travel permit to get into the area in the southwest of the region, and the Military Permit that is required to get into the Chomolungma National Park area. Permits for the trip are arranged by approved tour operators to get into the region and by the required guides when you reach Lhasa, the capital of Tibet.

The Tour to North Base Camp of Tibet

On the Tibetan side, tours are organized by local approved tour operators, and include a local guide and vehicle as a requirement. Foreign travelers are not permitted to travel through Tibet unaccompanied, and the tour operators arrange the whole trip, from Tibet Travel Permit to hotels to stay in. Most Everest tours start in Lhasa, and cover many other interesting sites as you travel across the region to Mt. Everest Base Camp.

The normal tour takes in the monasteries and temples of Lhasa, and the famous sites of the city, including the amazing Barkhor Street, with its traders and pilgrims, Potala Palace and the sacred Jokhang Temple, the most sacred site in Tibetan Buddhism and the spiritual center of Tibet. The tour then follows the Friendship Highway across Tibet to Gyantse, and Shigatse, where you will get to see monasteries, lakes, mountains, and spectacular glaciers along the route. 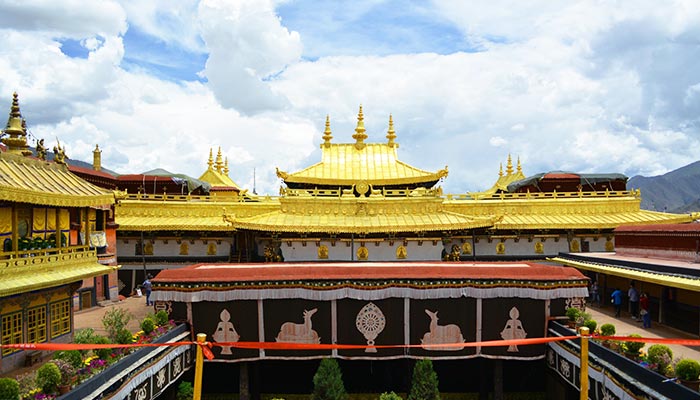 Jokhang Temple, the most sacred site in Tibetan Buddhism and the spiritual center of Tibet

Yamdrok Lake is the first notable place of interest on the road to Gyantse, and is one of the three largest sacred lakes in Tibet. Surrounded by the snow-covered mountains and fed by several small, Himalayan streams, the crystal blue lake is a breathtaking sight. In Gyantse you will visit the famous Pelkor Monastery, the “Auspicious Wheel Joy Monastery”, that is unique in that it houses three separate sects of Tibetan Buddhism. Shigatse is the second largest city in Tibet, and is home to the renowned Tashi Lhunpo Monastery. The oldest and largest monastery of the Gelug Sect of Tibetan Buddhism, Tashi Lhunpo is spread across a huge area of land below a beautiful green hillside. 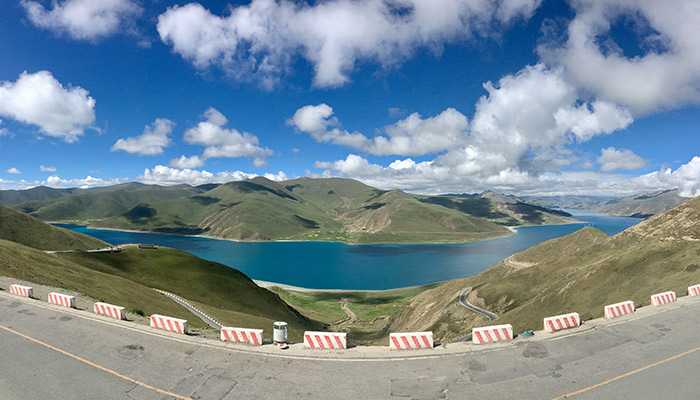 Yamdrok Lake, one of the three largest sacred lakes in Tibet

Just a few kilometers from the tourist camp lies the stunning Rongbuk Monastery, the highest monastery in the world, and is where many tourists stay en-route to Mt. Everest. The monastery houses a guesthouse and a small camping ground, where you can set up tents or stay in the local tent hostels. The view of Everest from the monastery is stunning, and if you get up early in the morning, you can watch the rising sun turn the snowy peak a beautiful shade of orange. 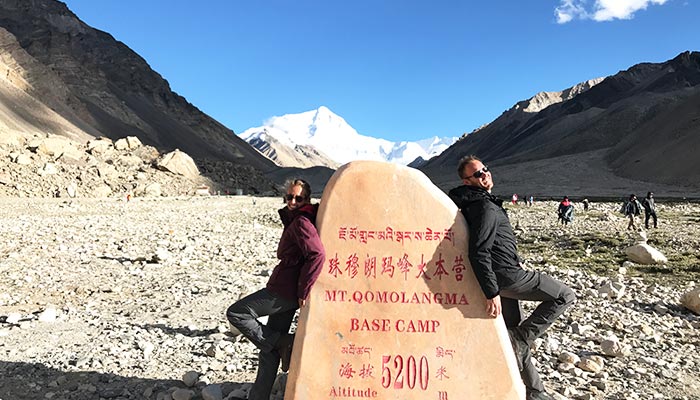 Took photo at the landmark of Tibet Everest Base Camp

From the monastery, it is a short trek to the tourist camp, or your guide or even the local bus can drive you there. Everest Base Camp, or EBC as it is known, also has the local Tibetan tent guesthouses on the site, and is a great place to stay to spend time getting the best views and photos of the mightiest of mountains. Once the visit is over at EBC, you will be driven back to Lhasa, via Shigatse and Gyantse, and will get another chance to view the incredible scenery and landscapes of the high Tibetan plateau.

>> Join-in the most popular Tibet Everest Base Camp Tours

Tours to EBC are not limited to a certain length, and can even be tailored by us to suit your individual needs. Group tours are the most popular, as it can reduce the cost of the trip, but if you require it, an individual tour can also be arranged, to meet your exact specifications. Just tell us your plan and we'll take care of the rest!