What to See during your Tibet Train Journey

The Qinghai-Tibet Railway is not only famous for its hard construction condition and unique location at high altitude, but also for the spectacular sceneries along the railroad. The Qinghai-Tibet Railway traverses three mountain ranges of Kunlun, Tanggula and Nyainqentanglha, and numerous rivers and lakes. The attractions along this world's highest railway are really marvelous and breathtakingly majestic. If you are not in a hurry to get to the destination, you can take the sky train to Tibet and enjoy the alpine scenery. The whole journey is worth your time. The followings are a list of the main great attractions along the Qinghai-Tibet Railway.

If you have a short stay in Xining, Qinghai Province, Qinghai Lake should be your first destination before starting your train journey to Lhasa, Tibet. Qinghai Lake (3,200m), the largest inland salt water lake, sits at the east of Qinghai Province and is about two and half hours’ drive from Xining. The ellipse-shaped lake looks like a huge poplar leaf sitting on the alpine prairie and occupies an area of 4456 square meters. The lake presents the most beautiful scenery during summer and autumn. 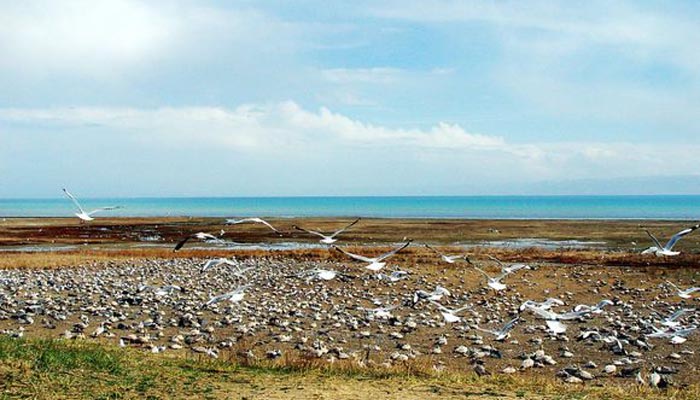 Qinghai Lake is home to various fauna and flora. The charming Bird Island on the western shore is a paradise for varieties of birds. Each March and April when the ice covering the Qinghai-Tibet Plateau begins to melt, more than 20 kinds of migrating birds come to the island to breed. At that time, the whole island is occupied by flocks of birds. Except the Bird Island, there are another four major sights around the lake. They are Haixin Hill, Haixi Hill, Sankuaishui (Three Stones), and Sand Island.

Ta'er Monastery is another choice for your short stay in Xining. This monastery, about 25 kilometers away from Xining, is the birth place of the founder of Gelugpa, Tsong Khapa. And it’s also one of six largest Gelugpa monasteries in Tibetan Buddhism. The monastery is not only one of the most popular places in Qinghai but is also recognized as a cultural relic site under state-level protection. 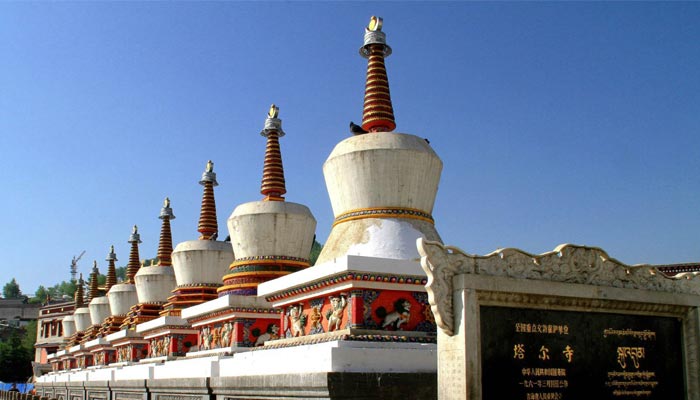 Ta'er monastery holds several religious ceremonies throughout the year, which attracts many pilgrims and visitors. For example, on 15th April and 6th June a large embroidered picture of the Buddha is unveiled on Lotus Mountain, towards the east side of the temple; on 8th June a colorful sedan, mounted by a golden statue of Maitreya Buddha, is paraded around the building; and on 22nd September the temple opens all its halls to exhibit its numerous treasures. During these ceremonies, a religious dance known as the Changmo (Sorcerer's Dance) is often performed. Other festivals include the Butter Lamp Festival held on 25th October (the day Tsong Khapa is believed to have died) and a prayer festival held during the Lunar New Year.

Chaerhan Salt Lake, 750 kilometers away from Xining, might be the first majestic sight running into your eyes when you ride along Qinghai Tibet Railway. The Chaerhan Salt Lake is the largest one of Chaka Salt Lakes which were originally part of the ocean in primordial times and formed during the intense crust activity. The Chaerhan Salt Lake occupies an area about 5856 square kilometers. It is the largest Salt Lake in China and one of the most famous inland salt lakes in the world. You can see clouds reflecting on the surface with snow-mountains, tents of nomad and herds scattered nearby. 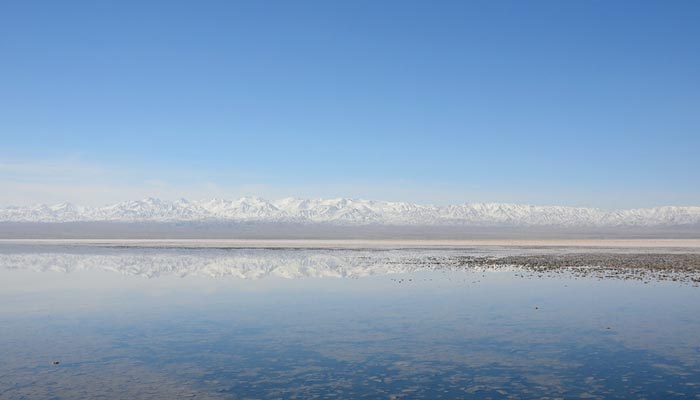 Chaerhan Salt Lake is the largest salt lake in China.

Kunlun Mountains are the first range that the Qinghai Tibet Railway traverse. As the largest mountain system in China, the mountains extend a distance of 2,500 kilometers at an altitude between 5,500 and 6,000 meters above sea level. Their peaks perennially snow-covered present a pure sight. 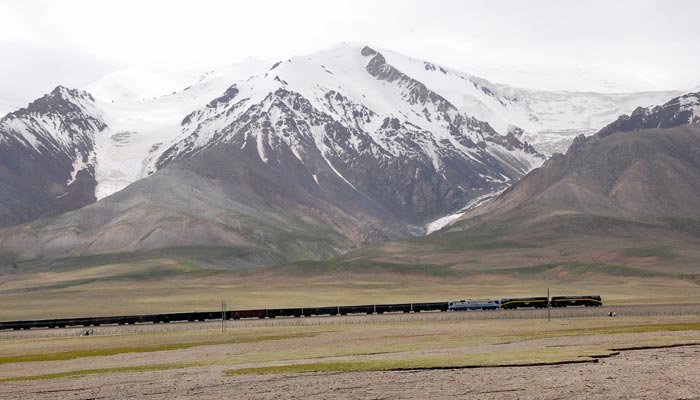 After travelling from Golmud to the south for 160 kilometers, the train will run through the first pass, Kunlun Mountain Pass, where the altitude rises abruptly from 2,800 meters to 4,700 meters and the temperature and air pressure drop accordingly. It is just like that you suddenly traverse from hot summer to severe winter with icy snow scenery surrounding you. You can also see lovely animals leaping on the snow and grassland. 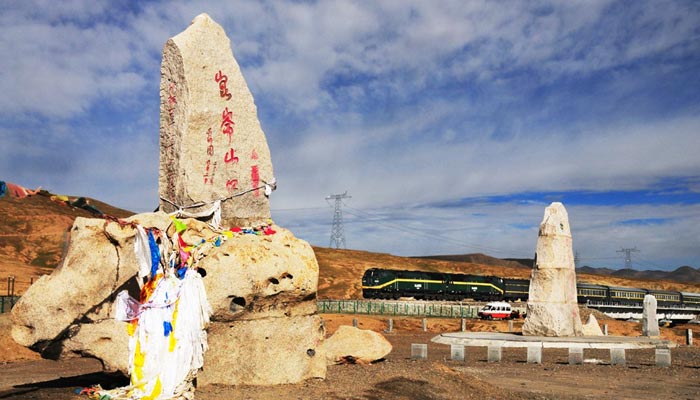 The Tibet Train passing through the Kunlun Mountain Pass.

You can never feel boring on the train to Tibet. When the train passes by Hoh Xil Area, you may be lucky to glimpse the elegant posture of the Tibet antelope or see groups of Tibetan antelopes running after the train. It is a harmonious picture of coexistence of people and wild animals. This is the largest depopulated area in China, covering 4,500 square kilometers. At an average elevation above 4,000 meters, Hoh Xil is extremely cold with thinner air, forming a life forbidden zone. However, it is a heaven for over 230 species of wild animals including Tibetan antelopes, Tibetan wild donkeys, wild yaks, white-lip deer, snow leopards, Tibetan snow pheasants, and black-necked cranes, etc. Living here, they are protected from being disturbed by hunters. For the protection of these wild animals, the railway was built on the 3- 4 meters high bridge, while special passages for the wild animals are channeled under the bridge according to their migration habits. 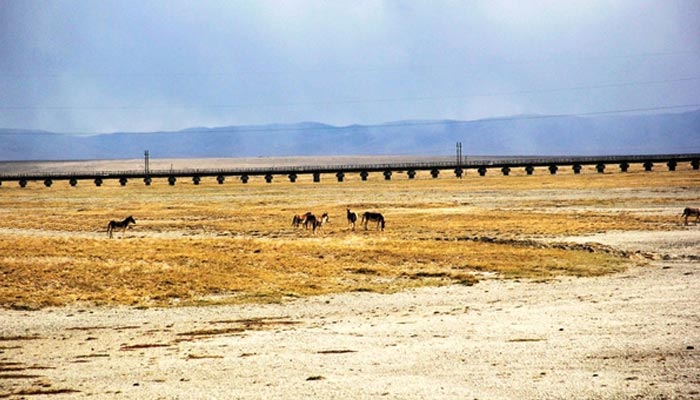 Hoh Xil is a heaven for wild animals.

Tuotuo river, the origination of the longest river in China, Changjiang River. Natural scenery around it is unique and amazing, with bamboo-shaped ice bars, ice-bridges, icy lakes and so on. Moreover, you can see yaks drinking water beside the river or trying their best to fill their stomach. 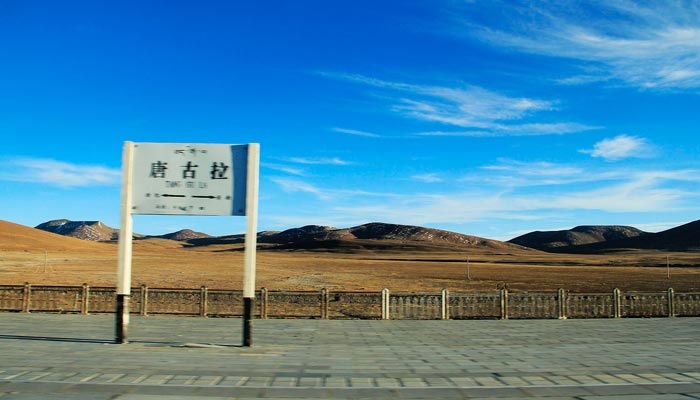 The Tibet train passes through the Tanggula Mountain Station.

After running about 203 km away from Tuotuo River Town, the train will arrive at the Tanggula Mountain Pass, the highest point along the (Qinghai-Tibet Train) railway with an elevation of 5072 meters. The Tanggula Mountain Pass is also the natural boundary between Qinghai and Tibet. In the past, it was an invincible barrier to Tibet due to its high altitude, thin air and atrocious weather. However, do not worry about the oxygen content which is only 60% of that in the plains. There is oxygen access in the waiting room of the railway station. Besides, there is a sightseeing platform for you to get the best sight of the the Tanggula Mountain.

Surrounded by the Kunlun, Tanggula, Kangdise and Nyainqentanglha mountains, the Changtang Grassland is one of the five biggest pastures in China as well as the paradise for wild animals and plants. Yaks, sheep and nomad's camps can be seen everywhere on the vast grassland. If you are lucky, you can attend the grand annual horse-racing festival held in this grassland, when the local Tibetans converge here to celebrate their traditional festival. 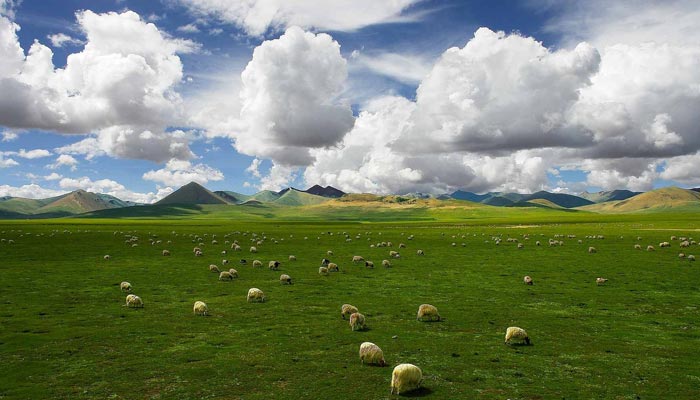 Passengers can enjoy the stunning view of Changtang Grassland on the train to Tibet.

Eight-Pagodas is in the Wuma Town, about 40 miles from Damxung. It is said that king Gesar had buried here one of his generals, Xiaba and had built Eight-Pagodas in honor of him. It is still in good condition even today. 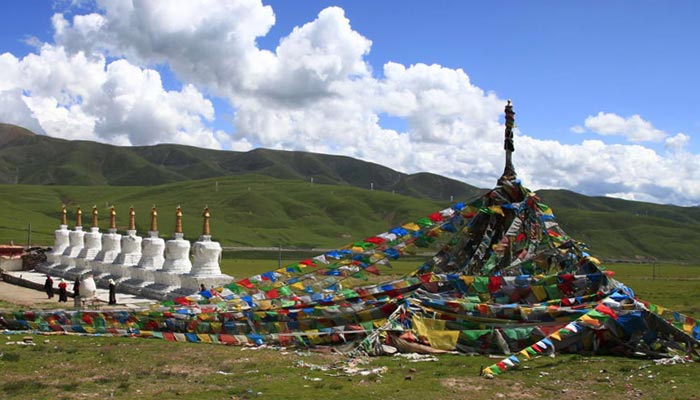 The Eight-Pagodas is located at the roadside of the Qinghai-Tibet Road from Damxung to Nagqu. Every 15th, 30th in Tibetan Calendar, the herdsmen on the pasture would come here to worship, pray and spin the sutra tube, wish the hero rest in the heaven.

Namtso Lake is a very famous holy lake in Tibet. It is the second largest salt lake in China and the highest one in the world. At an elevation of 4,718 meters, Namtso Lake covers an area of more than 1,900 square kilometers, spanning 30 kilometers from north to south and over 70 kilometers from east to west. The blue sky dyes the lake with blue. The sky seems to be integrating with the lake, which create a blue world that decorated by white snow-covered mountains. It makes visitors feel themselves in a fairy land if they have a stroll by the lake. 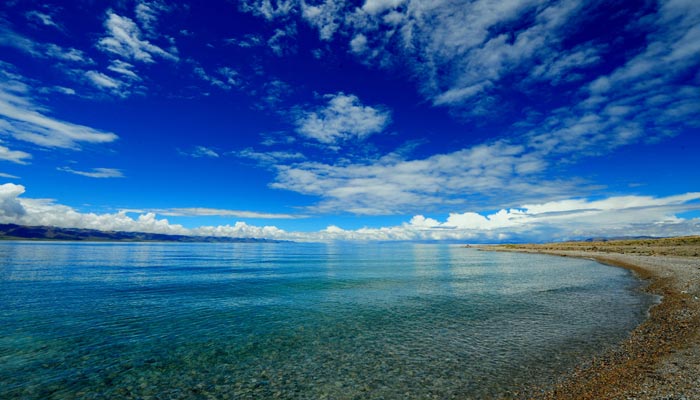 Namtso Lake is the highest-altitude salt lake in the world.

The Qinghai-Tibet train will also pass by the world-famous hot springs, Yangpachen Hot Springs. It includes highest-temperature hot springs, boiling springs, geysers, and common hot springs. It is a spectacular landscape on the plateau.

There’s no doubt that the Qinghai-Tibet railway itself is very attractive to tourists. When you see this engineering marvel of the world, you will be shocked. It has created a number of records in the history of railway transportation:

2) The longest plateau railway in the world: extending 1,956 kilometers from Xining to Lhasa.

4) The highest train station in the world: Tangula Train Station at an altitude of 5068 meter above sea level.

8) The world's longest plateau rail bridge on frozen earth: Qingshuihe Bridge, with a length of 11.7km.

While traveling along the world’s highest railway, you can appreciate the stunning landscape of the Tibetan plateau from the windows, including rolling mountains, vast grasslands, clear rivers and lakes, and unique plateau flora and fauna. It must be a special experience that you can't forget in your Tibet tour.