10 Facts about Saga Dawa Festival: A Useful Guide for Your Festival Tour to Tibet

One of the most sacred festivals in Tibet, the Saga Dawa is the celebration of the events in the life of Buddha Sakyamuni. Worshipping the life of the founder of Buddhism around the world, the festival honors the instruction of Buddha to follow his teachings rather than with flowers, incense, and lights. An enchanting festival with ceremonies honoring Lord Buddha, this is one of the most exalting experiences in Tibet.

Here we will introduce 10 important facts about Saga Dawa that you may not know, to help you have a better festival experience in Tibet.

While the festival celebrates the major events in the life of Buddha, it is also known for being a day when people give more generously to the poor. In Chinese, the festival is called “Qiong ren jie”, which translates to Poor People’s Day, and in Tibet, people practice giving to the monks and nuns and the poor of the community. Tibetans believe that giving to the poor accumulates merits, and more so in the month of Saga Dawa. 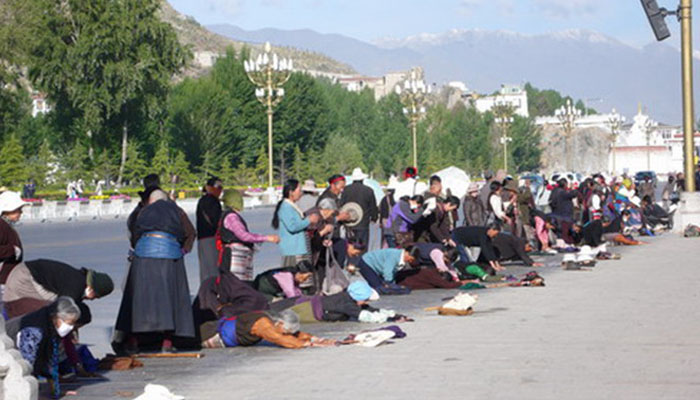 Saga Dawa is celebrated on April 15 in Tibetan calendar

The festival is traditionally celebrated on the 15th day of the fourth month in the Tibetan calendar. In Tibetan, Saga means “fourth”, while Dawa translates to “month”, hence the time of the festival and the name. While the festival’s main event is on the 15th day, the celebrations last for the whole of the fourth month, making it one of the longest of the Tibetan festivals. The date does vary, though, due to the difference of the Tibetan lunisolar calendar with the Gregorian calendar. It is normally held sometime in May or June in the solar calendar.

A ritualistic ceremony that commemorates the major events in the life of Buddha Sakyamuni, namely his birth, Nirvana (enlightenment), and Parinirvana (death), the Saga Dawa festival is held to honor the wishes of Buddha on his deathbed. As he lay dying, he instructed his followers not to honor him with flowers and incense, but to strive to follow his teachings and live a noble and compassionate life. He urged the people around him to not weep, but to remember that all things turn to dust, and celebrate his rise into heaven. The festival is celebrated by going to temples, raising a flagpole, and lighting butter lamps, as well as performing the ritual kora at many holy sites. 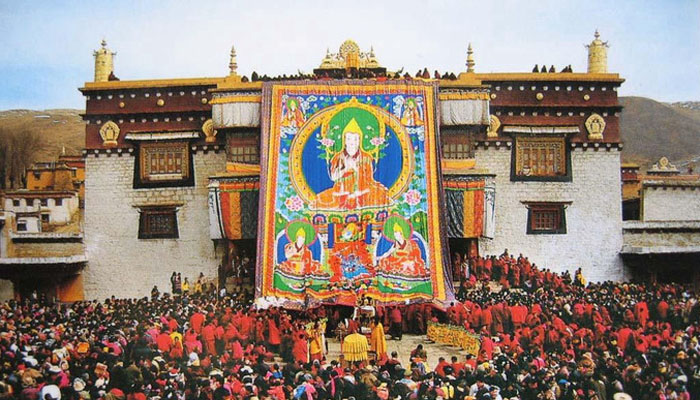 Saga Dawa is about making merit

One of the most common beliefs is that all actions made in the month of Saga Dawa is multiplied, and it is known as the “merit month”, because of the actions of people going to temples, giving generously, and making sacred pilgrimages. Throughout the month, people travel to sacred and holy sites around the plateau, especially to the sacred Mount Kailash, as pilgrims to honor Buddha by taking the pilgrim kora around the site. In Ngari, thousands of people travel to Mount Kailash to make the trek around the world’s most sacred mountain.

If you are planning to visit Tibet in the time of the Saga Dawa, then Lhasa is one of the best places to be for the festival. In Lhasa, the Saga Dawa has become a major event in the lives of the Tibetan people, and this stunning city is a wondrous place to be at this time. Thousands of pilgrims make their shuffling way around the kora routes of Lingkhor and Barkhor Street, walking around the sacred Jokhang Temple murmuring prayers and sutras while spinning prayer wheels. 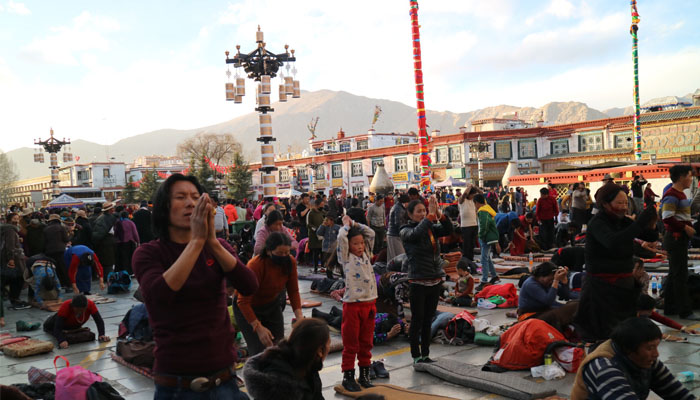 Around the city, people are visiting the temples and monasteries, praying at the altars and leaving offerings of tsampa and butter lanterns. And pilgrims burn juniper branches in Weisang, at various points around the kora, and some even do all three kora routes in Lasa, the inner kora at just 500 meters, the middle kora at around 1km, and the outer kora around the Jokhang temple, Potala Palace, Ramoche Temple, and Yaowang Mountain at around 5 kilometers.

You can also experience Saga Dawa at Mount Kailash

The Saga Dawa Festival at Mount Kailash in Ngari Prefecture is very different from the one held in Lhasa, and runs more heavily into the religious ceremonies of Tibetan Buddhism. The ceremonies start at the flagpole of Tarboche, where lamas perform religious rituals before the flagpole is pulled down and the thousands of prayer flags replaced with new ones. Then the flagpole is re-set in place, to stand perfectly vertical to ensure the safety and continuation of Tibet, as the lamas perform a kora walk around the site of the flagpole. 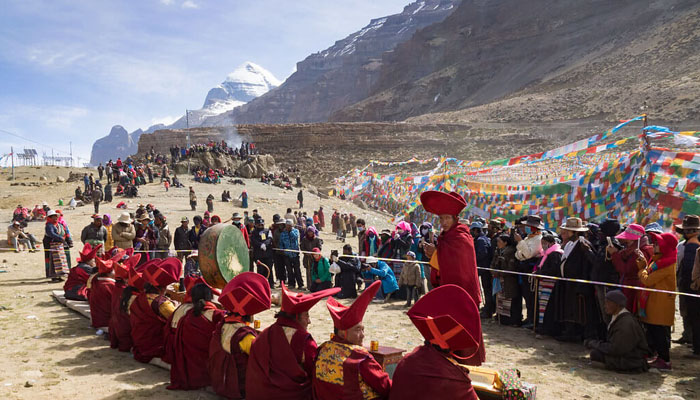 After the religious rituals and ceremonies, the host of people, both Buddhists and Hindus, head off to perform the kora ritual around Mount Kailash itself. The kora route around the mountain stretches out for 52 kilometers, and is one of the most auspicious kora walks in Tibet, around the world’s most sacred mountain. The pilgrimage crowds make their way up the valley along the western face of the pyramid-like mountain, many of whom will finish the kora in a single day. Every year, thousands of tourists will also join the Mount Kailash trek tour, to experience this holy ritual of a lifetime.

Doing kora is an important way to celebrate Saga Dawa

Making a ritual kora during the Saga Daw is an important event for Tibetan Buddhists, who believe that any merits accumulated during Saga Dawa are multiplied depending on where you perform the acts of goodness and compassion. For those performing the kora around such sites as Jokhang Temple and Mount Kailash, it is generally believed that the merits are multiplies by one hundred thousand, making just one circumambulation of the site an important act in their journey towards enlightenment. 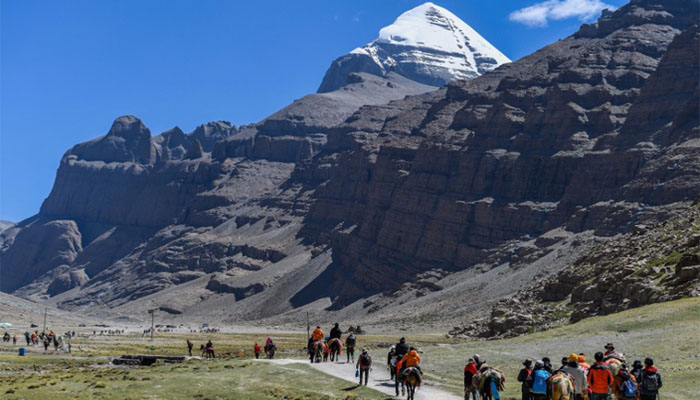 Do kora around Mount Kailash

Local Tibetans will become vegetarians during the Saga Dawa

Another common act in the period of the Saga Dawa is that Tibetan Buddhists will not eat meat, allowing the animals to be free and alive for their merits. The people eat only fruits and vegetables during this month, and refrain from consuming any animal products. Many will even take animals and fishes and release them back into their wild habitats to attain merits for their kindness to the creatures. These acts are all part of the ways of attaining more merits during this month of merits.

For anyone wanting to experience the best of the ritualistic storytelling Cham dances in Tibet during Saga Dawa, there are two locations where you can get the best experiences of these amazing exhibitions. Renowned as ritual dances performed by monks and lamas dressed in garish robes and colorful masks, the Cham dances often tell stories of the life of Buddha and other saints in Tibetan Buddhism, including Padmasambhava, the Indian sage of the Eight Faces. 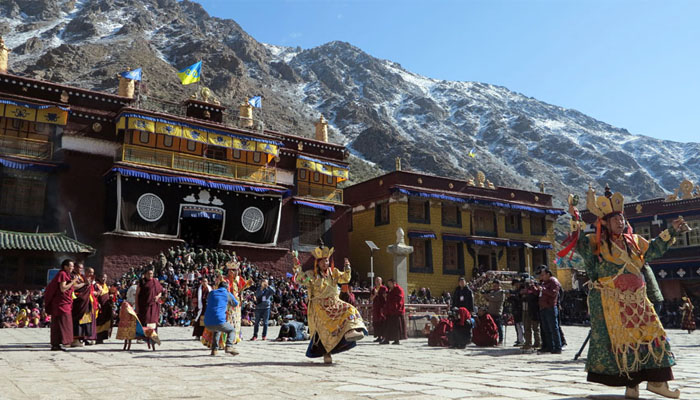 Drigung Til Monastery to the east of Lhasa City is one of the best places for the Cham dances, and holds its own Cham Dance Festival for five days from the 25th day of the 4th month. The dances are held to commemorate the Parinirvana of the founder of the monastery, Jigten Sumgön.

The Tsurphu Cham Dance Festival, which is held in the Tsurphu Monastery to the west of Lhasa on the 10th day of the 4th month, is also a good chance to get to see some of the most outstanding examples of Cham dancing in Tibet. The festival is held to commemorate the birth, death, and enlightenment of Padmasambhava, who came to Tibet in the 8th century to devote himself to promoting Buddhism in the Himalayas. Many of the dances feature the Indian sage in one of his eight guises.

One good way to experience the Saga Dawa Festival in Tibet is to take a tour of the region at the time of the 15th day of the 4th month, the most important day of the month. We can provide you with a 5-day tour of Lhasa to experience the festivities in the Tibetan capital. Or you can take a longer 14-day tour for Mt. Kailash in Saga Dawa Festival to see the ceremonies at Tarboche Flagpole and walk the kora around Mount Kailash with the thousands of devout pilgrims.

Of all the festivals in Tibet, the Saga Dawa is the most devout Buddhist ceremony of all, and is attended by almost every Tibetan somewhere in the plateau. As one of the most important dates in the Tibetan Buddhist calendar, this is a great opportunity to experience the fullest beliefs of the Tibetan Buddhist people, and learn more about the unique religious culture that still thrives on the Roof of the World.

Be the First One to Comment "10 Facts about Saga Dawa Festival: A Useful Guide for Your Festival Tour to Tibet"