What are the Most Important Tibetan Festivals You Cannot Miss in 2023?

One of the main reasons for tourists to visit Tibet is to enjoy its unique traditional festivals. While throughout the year, there are more than 50 festivals held across the vast land of plateau. So many will ask which are the most important festivals in Tibet? And which festivals are worth joining? Will I just catch up with certain festival when travel to Tibet?

Here we will introduce you seven most important festivals to celebrate in Tibet, including the recognized significant Tibetan New Year, Saga Dawa Festival and Shoton Festival. Then you can easily book your Tibetan festival trip to coincide with the festival of your choice.

Tibetan New Year (Mar) - The Most Important One across Tibet

Held on the first day of the New Year in Tibet and the Tibetan areas of Sichuan, Qinghai, and Yunnan provinces, Tibetan New Year (also called Losar) is the traditional festival to celebrate the beginning of a new year in the Tibetan Buddhist calendar. The date of the festival celebrations varies each year in the Gregorian calendar, due to changes in the number of months in the Tibetan calendar to adjust to solar years from a lunar based system. The festival is normally held in either February or March, depending on the calendar. 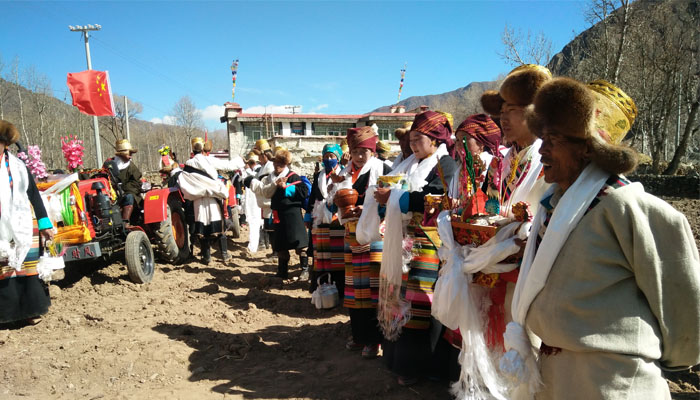 Losar is held all across the plateau, though with some differences in certain areas of Tibet. In Shigatse, the festival is celebrated on the 29th day of the 11th month in the Tibetan calendar, while the “Farmer’s New Year”, or Gtsang New Year, is held on the first day of the 11th month.

The highlights of the festivities include the delicious foods, most primarily the traditional Guthuk, the burning of traditional “sang” to offer blessings to the gods, prayers and worship in the temples, and a lot of singing and dancing. It is also a time to spend with friends and family, and the giving of hada and visiting relatives is commonplace at this time. While the festival does normally last around 15 days, it is the first three days that are the most important.

Saga Dawa Festival (Jun) - The Holiest One in Tibet

As one of the most important religion-based festivals in the Tibetan Buddhist calendar, the Saga Dawa festival is held in several places across the plateau, but none more so than in Lhasa or at the flagpole of Tarboche, at the foot of the sacred Mount Kailash. Lasting for around a month, the festival celebrates the Birth, Nirvana (enlightenment), and Parinirvana (death) of Buddha Sakyamuni. The festival covers the whole of the fourth month of the Tibetan Buddhist calendar, with the peak being on the 15th day of the 4th month, which is usually around mid-June in the Gregorian calendar. 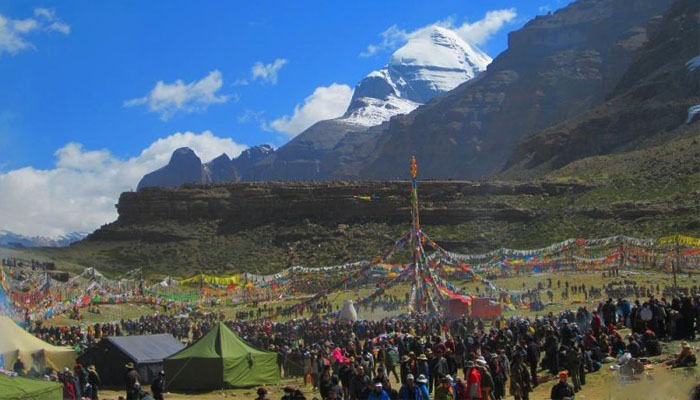 Saga Dawa Festival is the holiest festivals in Tibet.

Tibetans believe that any good deeds and prayers are multiplied a thousand-fold in this month, and people are generally kinder and more giving than usual. Tibetans refrain from killing animals for food, give alms more readily to the monks, and release captive animals back into the wild as ways to gain merits in multiplied quantities. Pilgrims also spend more time taking on the various kora walks around temples and religious or sacred sites, and the kora around the sacred Mount Kailash is one of the most popular.

When it comes to festivals that include thangka unveilings, the famous Tashilhunpo Thangka Festival is one of the largest on the plateau. Held annually in the Tashilhunpo Monastery in Shigatse on the 14th day of the 6th month in the Tibetan Buddhist calendar (around the end of June to the beginning of July), the festival is one of the most important celebrations in the Buddhist calendar. Also known as the Buddha Exhibition Festival, the main feature of the event is the unveiling of a giant thangka painting on the massive wall above the monastery. 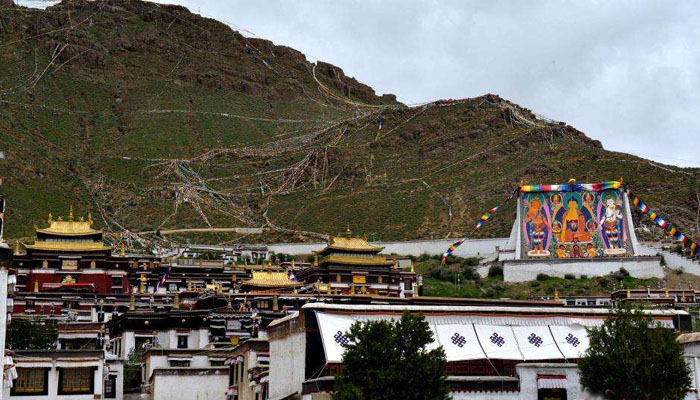 A giant thangka painting is unveiled during the Tashilhunpo Thankga Festival.

The festival at the Tashilhunpo Monastery lasts for three days, and hosts the unveiling of three different thangka paintings. On the first day the thangka depicts the image of the Buddha Amitabha, which is meant to remind people to cherish their memories of the past and their past lives. The second day hosts the unveiling of the thangka of the Sakyamuni Buddha, which reminds people to pray for a life filled with happiness and joy. And the third day sees the thangka being unveiled as the one that shows the image of the Maitreya Buddha, or Future Buddha, to encourage people to have hope for the future.

Horse racing is a popular activity in Tibet, and there are many horse-racing festivals held across the region throughout the summer month. But none is more popular and more widely visited than the famous Nagqu Horse Racing Festival, held in the northern Tibetan grasslands in the summer months. The festival is held in the beginning of August every year, and lasts for around two weeks. And as one of the grandest of its kind in Tibet, it is common to see Tibetans traveling hundreds of kilometers to visit the festival site. 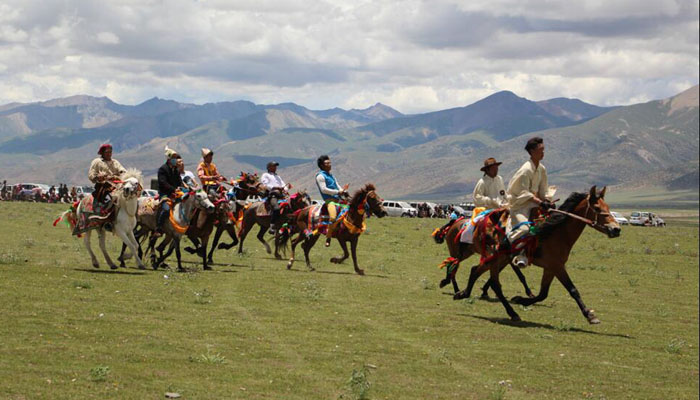 A thrilling Horse Racing Festival is held in Tibet Nagqu.

The festival features a host of horse-based events, including horse racing, showmanship events, horsemanship skills competitions, as well as archery contests, lots of singing and dancing, and many others. The festival is held on the vast grasslands more than 300 kilometers north of Lhasa, and a veritable tent city forms as thousands of nomadic tents are erected for the festival. You can also find many folk activities and commodity fairs as well, as it is a good time for locals to come together for trading and bartering.

Shoton Festival (Aug) - The Most Popular in Tibet

Once a purely religious ceremony, the Shoton Festival has its origins in the distant past when the Buddhist monks would spend 100 days in seclusion inside the monasteries in fasting and contemplation, and to reduce the chance of killing any living creature, even the smallest ant. When they emerged, they would be presented with milk curds by the local people to show their thanks for the sacrifices of the monks. Over the years, this changed to become yogurt, and the Shoton, or “yogurt banquet” was born. 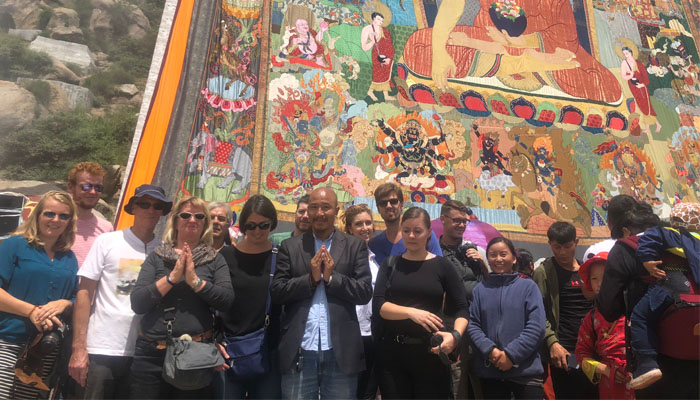 These days, the festival is a mix of a yogurt banquet, a Buddha unveiling ceremony, and a Tibetan opera festival. Traditionally, Tibetans go to their local temple and offer yogurt as thanks still, as well as spending time at one of the various festival sites. The most popular is the festival at the Drepung Monastery, where a massive thangka is unveiled on the first day of the festival. The remaining days of the week-long festival are held in the Norbulingka Palace in Lhasa, where you can see Tibetan operas, enjoy the festival’s other events and stalls, and eat lots of yogurt.

Bathing Festival (Aug) - The Most Unusual One in Tibet

Lasting for a week in the beginning of the 7th month of the Tibetan Buddhist calendar, the traditional Bathing Festival is one of Tibet’s most unusual festivals. The tradition has its beginnings in legends of a time when pestilence was widespread in Tibet. The Avalokitesvara poured holy water into the rivers and lakes of the plateau, and ordered the people to bathe to get rid of their illnesses. Ever since, the Tibetan people have gone to the rivers and lakes to bathe in the holy waters of the Avalokitesvara at this time of year, and believe that bathing in this special time can cleanse the soul as well as the body. 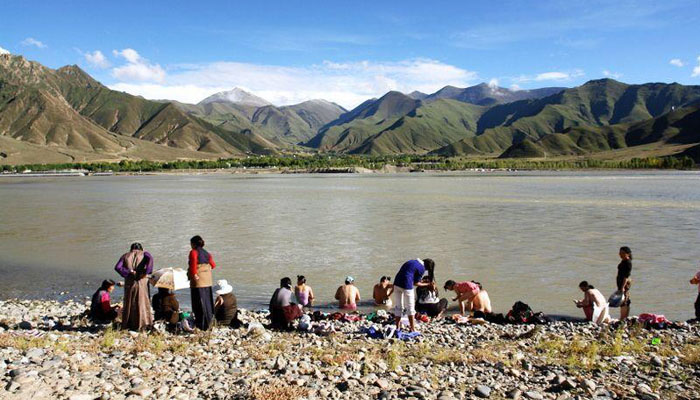 Bathing during the Tibetan Bathing Festival is believed to be able to cleanse the soul and the body.

The actual date of the festival depends on the rising of the planet Venus, known in Tibet as “Gamariji”, or the “Qishan Star”. As the star rises in the sky above the horizon, which only happens in Tibet at one specific time in around August, Tibetans begin their mass bathing, which lasts until the star drops below the horizon once again. According to the Buddhist beliefs of the Tibetans, the waters have certain properties at this time, and will do no harm to the body.

Held to celebrate the Parinirvana of Je Tsongkhapa, the founder of the Gelug tradition of Tibetan Buddhism, the Tsongkhapa Butter Lamp Festival is held on the 25th day of the 10th month in the Tibetan calendar. Known also as the Ganden Ngachen Chenmo Festival, it is s time when butter lanterns adorn the walls, windowsills, and rooftops of monasteries and houses all across Lhasa. On religious altars, in every temple, and in the homes of the Tibetan people, hand-crafted lanterns made from yak butter are lit to commemorate the passing of one of Tibetan Buddhism’s greatest masters. 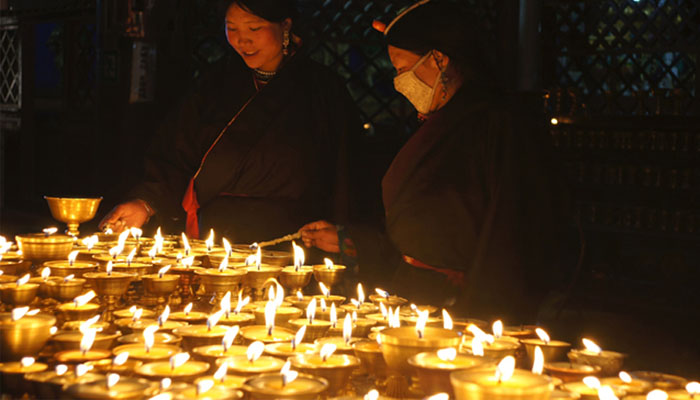 The lanterns are created a few days before the date of the festival, and monks and lamas in monasteries spend days in icy-cold conditions carving out the butter lanterns to ensure they will not melt. As night falls on the date of the festival, the lamps are lit all over the city, and the bright lights of the flames can be seen for miles. In Tibetan Buddhism, odd numbers are known to be auspicious numbers, so there should always be an odd number of lanterns in the place where they are lit. For the best location for the Ganden Ngachen Chenmo Festival, head for the temple square in front of the Jokhang Temple, where the lamps are lit along the streets and the roofs of the temple to the accompanying sounds of the Suona.

Tibet has more festivals than you could possible manage to visit in one trip, so it is a good idea to plan your trip around a certain festival that you want to visit and experience. We can help with a wide range of festival tours that we run at the dates of the various festivals in Tibet. These include trips to coincide with the Shoton Festival, the Tashilhunpo Thangka Festival, Tibetan New Year, the Saga Dawa festival at Mount Kailash, and many more. Just get in touch with us to arrange your fantastic festival tour on the Roof of the World.

Be the First One to Comment "What are the Most Important Tibetan Festivals You Cannot Miss in 2023?"