How to Plan a Tibet Monastery Tour

When it comes to Tibet, no one can omit the unique Buddhist monasteries here. Every year, groups of travelers make their visits to Tibet for the worship of the sacred Tibetan monasteries, and pious believers do lifetime pilgrimages from distant places. But for first-timers to Tibet or travelers with few knowledges about Tibetan religion or monastery, many things should be figured out before your trip. Here in this passage we will introduce how to plan a Tibetan monastery tour, to help you go with a smooth visit to these sacred sites.

Visiting Tibetan monasteries is a part of experiencing a complete trip to Tibet, but there are so many monasteries and temples of different types available on this land. Therefore, it is a wise choice to visit some of the most great and significant monasteries, so that you can get to know more about Tibetan religion and culture on site.

Lhasa is religious and culture center of Tibet, and the must-see monasteries here are Potala Palace and the Jokhang Temple. Potala Palace is actually a grand building that combines palaces, castles and monasteries. It is a UNESCO world heritage, and the highest palace in the world and the most complete ancient palace and fortress complex in Tibet. 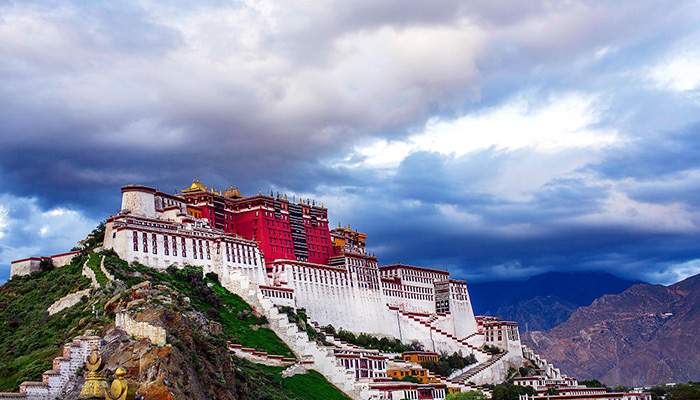 Jokhang Temple has a supreme status in Tibetan Buddhism, with a history of more than 1300 years. It is said that the city of Lhasa came after the birth of Jokhang Temple. It is the most splendid existing building of Tubo period in Tibet. Devotees made their pious kowtowing on the lime stone floor in front of the temple, and thousands of butter lamps are lit up here.

If time admits, one should also not miss the “Great Three Gelugpa Monasteries”, namely Drepung Monastery, Sera Monastery and Ganden Monastery. Drepung Monastery was once the largest monastery in Tibet, and the former seat of the Dalai Lama. At its peak, the monastery held more than 10,000 monks. 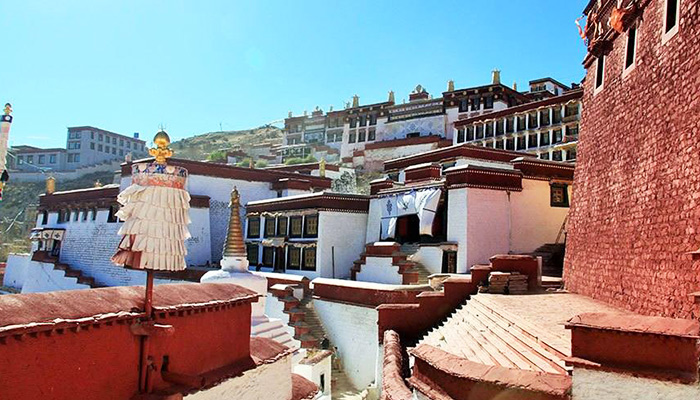 Sera Monastery has been a place where monks and living Buddhas have preached since ancient times. And now it is the widely famous for the monk debates held in the courtyard. The debates are unique and interesting, and usually held in the afternoon, between 3:00 to 5:00 pm. Ganden Monastery sits in the outskirts of Lhasa, back on a huge mountain, facing a stunning valley. It is the largest of the Gelugpa Monasteries in Tibetan Buddhism.

The Palcho Monastery, also called Pelkor Chode Monastery, is the only monastery that three sects of Tibetan Buddhism (Sakya school, the Kagyu school, and the Gelug school) coexist. It is a typical Tibetan Buddhist monastery building, with a combination of pagoda and temple. 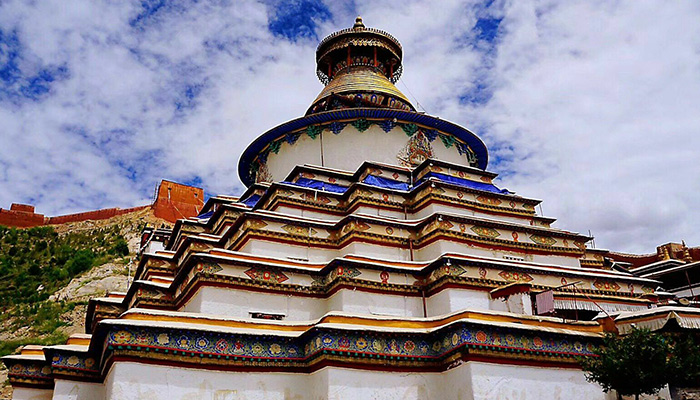 The giant Kumbum Stupa inside the monastery is the most prominent and only stupa of its kind in Tibet. This is no ordinary pagoda, as it is built from 100 Buddhist halls that overlap in sequence. Being 42 meters high with 108 chapels over nine stories, the stupa contains 100,000 Buddha statues painted in the hall.

Tashilhunpo Monastery is the largest one in the area of Shigatse, and is one of six most famous Gelugpa temples in China. It is the seat o the Panchen Lama, containing the largest statue of the Maitreya. It also possesses the only one buddha unfolding platform in Tibet, to hold grand buddha exhibition activities. 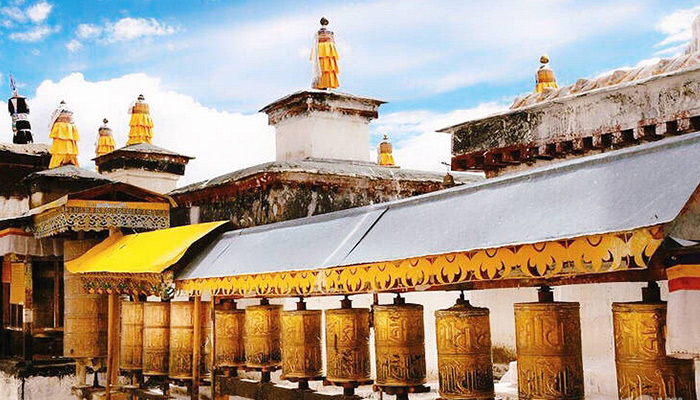 If you want to visit some ancient temples with beautiful scenery, then you should not miss the Sakya Monastery, which is located on the Bonbori Hill of Sakya County, Shigatse. It is the primary monastery of the Sakya Sect, and also known to many people as the “second Dunhuang” in Tibet. The monastery contains many antiques and collections dating backs to Song, Yuan, Ming, and Qing dynasties. 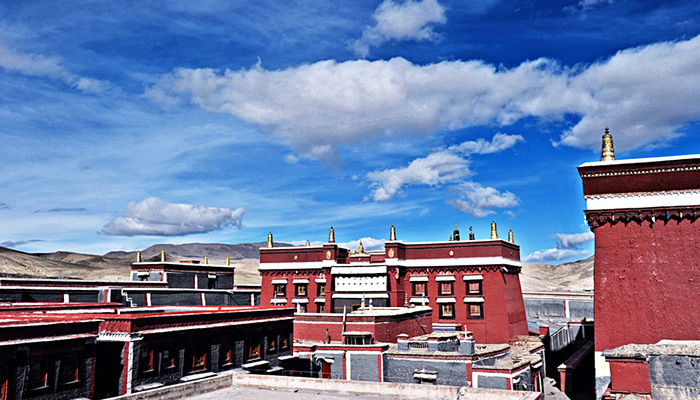 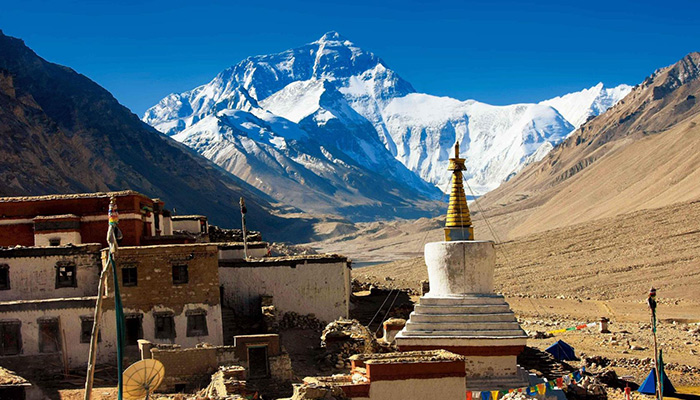 The Samye Monastery was built in the 8th century during the Tubo dynasty and was the first monastery in Tibet where monks were ordained. The architecture layout of the monastery is in the light of the Buddhist concept of the universe, and the central temple blends Tibetan, Chinese and Indian styles. 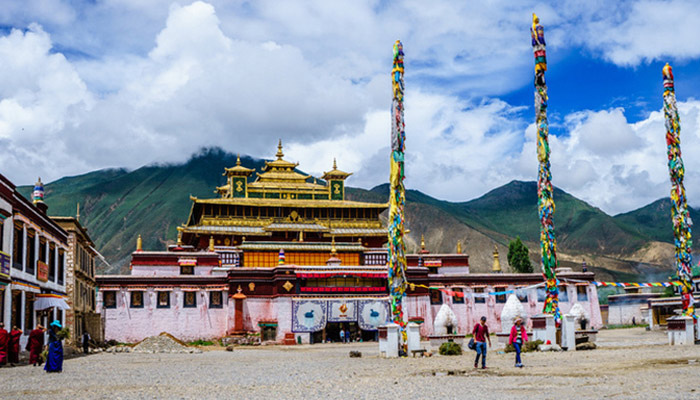 Tradruk Monastery is one of the earliest Buddhist monasteries in Tibet, where Songtsen Gampo and Princess Wencheng once lived. Its layout is similar to that of Lhasa's Jokhang Temple. The monastery is located at the southern foot of Mount Gunri, with a history of more than 1300 years, and was the first Buddhist temple during the Tubo period.

One can go to visit a Tibetan monastery all the year round. And if you want to experience the ceremonies or festivities held in the monastery, May to August and Dec to Feb will be the best time. As important Tibet festivals are mostly held during these months. You may have a chance to watch the Buddha Thangka unfolding at Drepung Monastery or Sera Monastery during Shoton Festival; or enjoy Tibetan drama in Norbulingka Palace etc.

Besides, winter season is a good time to visit Tibetan monasteries, since it is less crowded during this period. Contrast to fewer tourists, there will be more Tibetan pilgrims travelling to Lhasa to visit Jokhang Temple and the important monasteries here. You will have more chance to witness the religious rituals and traditions of monks and local people.

If you plan to tour Tibet for less than one week, you can visit Lhasa and central Tibet, where major monasteries locate. A four-day Lhasa city tour will enable you to visit Potala Palace and the important monasteries in downtown. And if you want to visit Ganden monastery in the suburbs, you can add one day to take a five-day Lhasa and Ganden Monastery tour.

A Lhasa to Tsedang tour of 6 days will focus on the monasteries and temples of central Tibet, which is also the culture and religious center of Tibet. Besides the must-visit monasteries in Lhasa, you will visit the Trandruk Monastery and Samye Monastery all together. Along the travel road from Lhasa to Tsedang, you will also encounter beautiful scenery of Yarlung Zangpo River. 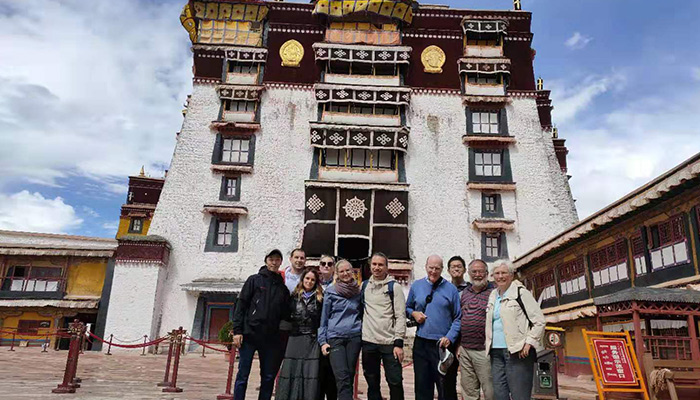 If you have more time to explore both the monasteries and natural wonder of Tibet, it is recommended to travel the route from Lhasa to Shigaste via Gyantse. In this way, an 8-day Lhasa to Everest Base Camp tour is a perfect choice. You will not miss the major monasteries in Lhasa, Gyantse and Shigatse, and even visit the Rongbuk Monastery at EBC. At the same time, the route connects Yamdrok Lake, Korala Glacier, Himalayan mountain views and more highlighted nature parts of Tibet.

Of course, there are more options to travel different routes. If you have a particular monastery to visit, or you want to experience your Tibetan monastery tour in your own way, you can contact our tour consultant to help arrange the ideal route according to your needs.

Preparation for Visiting Monasteries in Tibet

Besides, ordinary tourists need to know some rules about visiting a Tibetan monastery, in case you will not offend the monks or locals. Things like taking photos in the temples, wearing skimpy outfits should be avoided. Walk clockwise or follow the footsteps of local prayers as you do the kora around the temple, and so on. If you are not sure about the taboos, ask your tour guide before you visit the monastery.

Visiting a Tibetan monastery will be a unique experience during one’s Tibet tour. And one can plan a Tibet monastery tour following classic and popular routes, or some less-travelled itineraries, based on your own needs. Permits and documents are needed before one go to visit these sacred sites in different regions of Tibet. And it is necessary to pay attention to the dos and don’ts for visit a certain monastery. If you still have any question, please feel free to contact us for inquiries.