How to Take a Flight to Tibet from Yunnan?

Yunnan Province, in the southwest of mainland China, is one of the major gateway cities to Tibet for flights and overland journeys. Lying in the furthest southwest region of China, parts of this province were once encompassed by the former ancient Tibetan Empire. And Tibetan people still live in the Diqing Tibetan Autonomous Prefecture in northwest Yunnan. With its stunning landscapes and mild climate, this beautiful province is a popular tourist destination for international tourists, especially those heading on to Tibet after. And while it may not be as popular as Sichuan Province for entry into Tibet, Yunnan Province is still one of the most popular departure locations for travel to Tibet from Southwest China.

Book the Flight to Tibet from Yunnan

If you are planning a trip to Tibet, and are traveling to Yunnan Province first, then you have a choice of flights that can get you from the most southwesterly province of mainland China to the Tibetan plateau’s stunning capital. Flights depart from Kunming, the provincial capital, as well as Lijiang and Shangri-La.

Kunming to Lhasa Flight (Most Recommended)

As the capital of Yunnan Province, Kunming is a popular departure location for flights to Tibet, and the most recommended airport departure for Lhasa in this part of China. There are currently only two direct daily flights to Tibet from Kunming Changshui International Airport, offered by China Eastern Airlines and Tibet Airlines. These direct flights generally take around three hours to reach the plateau capital airport, and cost from around US$ 289 per person for a one-way economy flight. 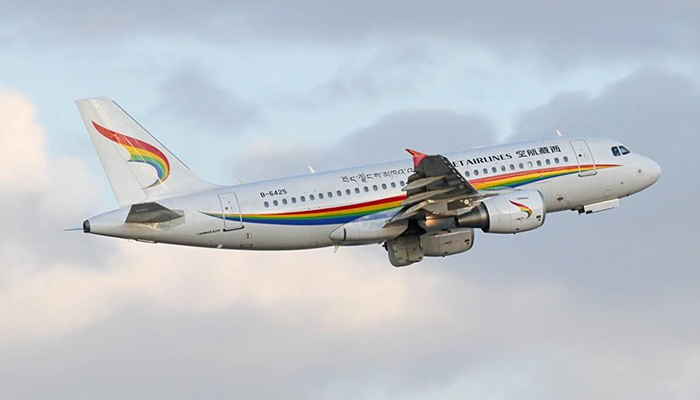 Kunming to Lhasa flight is most recommended to get to Tibet from Yunnan.

However, there are a number of stopover flights to Lhasa from Kunming, which make a short scheduled stop in Diqing or Lijiang along the way to Tibet. The flights are around the same price, with some being a little cheaper, and can get you to the airport in Lhasa in around four hours.

Only one direct flight departs daily from the Diqing Shangri-La Airport in Shangri La, which takes around 2 hours 10 minutes to reach the Lhasa Gonggar International Airport. The flight costs from around 209 US Dollars per person, and is offered by China Eastern Airlines. However, this does increase to two daily flights in the peak season of summer in Tibetan tourism, with Tibet Airlines offering the second flight.

Obtain the Tibet Travel Permit before You Go

For anyone planning a trip to Tibet who is intending to depart from Yunnan Province, it is important that you ensure you obtain your Tibet Travel Permit before you fly. Not only is this a requirement for travel to Tibet, but you will not be able to even board the aircraft without it.

The permit, which is only available to travelers who have pre-booked an organized tour of Tibet with a registered travel agency, is the most important permit for tourists traveling to Tibet. Once you have decided on your trip and booked the tour, your Tibet Travel Permit will be applied for on your behalf by us, as personal permit applications are not entertained by the Tibet Tourism Bureau in Lhasa.

Processing of the permit can take up to 10-15 days, though normally it takes less. However, it is important to book your trip at least 30 days in advance of your expected departure date for Tibet, to ensure that the processing and receipt of the permit is complete. Once the permit has been approved and delivered to us, we will make sure that it is delivered to your hotel in Yunnan Province in plenty of time for your flight to Lhasa.

Board the Flight to Tibet from Yunnan

Boarding your flight to Lhasa from Yunnan Province is pretty much the same as boarding any other flight around the world, with the exception of the need to show your Tibet Travel permit (the original) when you check in and at the boarding gate.

If you are departing from Kunming, the airport is located to the northeast of the provincial capital, around 25 kilometers from the city center. By car, it is a journey of around 45 minutes, and you can get a taxi to the airport from the city center, though this is the more expensive option. Local airport buses, which drop outside the gates of the airport, run regularly throughout the day on Route 919, and can cost from as little as 13 yuan per person. However, it is important that you know how to ride the bus in China before using these routes. 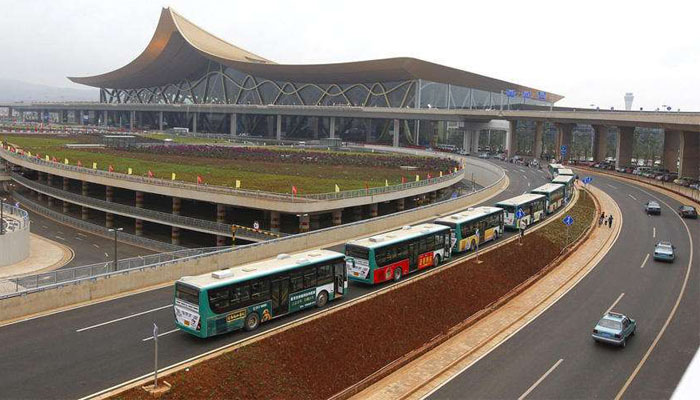 Kunming Airport is about 25 km from the downtown.

Airport shuttles also run from the city center to the airport every 20-30 minutes throughout the day and night. Listed as the Airport Expresses, these dedicated shuttles run you right to the terminal entrance, and cost just 25 yuan per person.

For those departing from Shangri La, the airport is located in the southwest of Diqing Tibetan Autonomous Prefecture, around 6-7 kilometers from the center of Shangri La itself. The drive to the airport by taxi takes around 12-15 minutes, depending on traffic, and costs around 30 yuan for the whole trip. However, there are no regular or shuttle buses that run to the airport, so you should make sure you can get your taxi with enough time for your check in at the airport.

Lijiang Airport is located to the south of Lijiang city, and actually lies at an altitude of around 2,243 meters above sea level. Lying around 30 kilometers from the center of Lijiang, the trip by car takes around 40-45 minutes. The only bus service to the airport is the dedicated Airport Shuttle, which departs regularly throughout the day from the terminal at the Blue Sky Hotel. Tickets for the shuttle cost from around 20 yuan per person. Taxis are available for this trip as well, if you are in a hurry, but can cost from around 100 yuan for the trip.

Lhasa Gonggar International Airport is the largest and most important airport in the Tibet Autonomous Region, and lies around 60 kilometers to the southwest of the Tibetan capital. Generally speaking, transfers from the airport to the city center take around an hour to 90 minutes, and cost from 25 yuan for the airport shuttle or around 100-200 yuan for a taxi, depending on how good you are at bargaining. 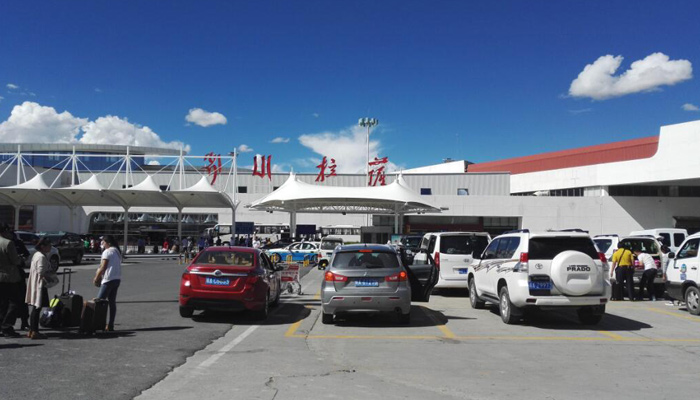 Lhasa airport is the destination of your flight to Tibet from Yunnan.

Travel to Tibet from Yunnan Province in Southwest China is one of the best and shortest flights to Lhasa from anywhere in mainland China. And with three major airports to choose from for the flights, you have plenty of reasons to fly direct from Yunnan to Lhasa, instead of transferring via Chengdu. While there may not be many daily flights out of Yunnan for Lhasa, there are usually few problems with booking the flights, though it is still advisable to book early, especially in the peak season. And with so many things to see and do in this most southwesterly part of China, lying in the foothills of the vast Hengduan Mountains, this is the perfect location from which to start your tour of the Roof of the World.

Read More about How to Take a Flight to Tibet from Yunnan?

Be the First One to Comment "How to Take a Flight to Tibet from Yunnan?"