How to Plan a Tour of China and Tibet in Two Weeks?

If you are thinking of traveling through mainland China to get to Tibet, then you have a lot of options for travel. With two weeks to travel around this massive nation, you can enjoy the best cities and sights of mainland China, from the Great Wall to the north of Beijing to the wonders of the Terracotta Army and the delightful Giant Pandas. You can also find your peace and serenity on the high Tibetan plateau, in the palaces and monasteries of the Tibetan Buddhist monks and the tranquility of the exquisite Tibetan landscapes. So if you have two weeks to spend in China, let us help you plan your epic lifetime vacation.

Classic plan for China and Tibet tour in two weeks

You have a huge range of options for a combined tour of mainland China and Tibet, and as with most such tours, you would normally start in China and move on to Tibet afterwards.

Two-three days to visit each city in China

How long to stay in China largely depends on how long you are planning for your tour of Tibet. If you are considering a shorter tour, then you have more time to spend in the major cities of China. However, for the longer 7-day overland tours of Tibet, you will have less time to spend, and it is better to choose your destinations in China carefully. 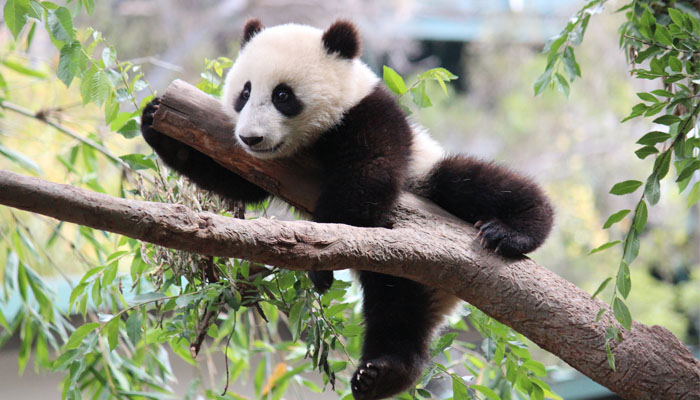 You can visit pandas in chengdu before you go to Lhasa.

On average, it is normal to spend 2-3 days touring each city in mainland China, and most tourists tend to visit the major cities such as Beijing, Shanghai, Chengdu, or Xi’an. While it is still possible to visit two separate cities in China with just 2-3 days to travel in each, it is recommended that you make sure you complete your China leg in a city that has a train or direct flight to Tibet. If you are planning on visiting Beijing or Shanghai first, then a good option is to take the flights or bullet trains to Xi’an or Chengdu for a day before continuing on to Lhasa by flight or train. Or you can just take the direct flights or trains to Lhasa without a second city visit.

How long you spend in Tibet depends on what you want to see, and most tourists tend to spend from four to seven days touring around the plateau region. The shortest tour is actually four days, which gives you a good insight into the Tibetan capital of Lhasa. While you will not actually go outside the capital, it is a good way to introduce yourself to this high-altitude destination.

You can also choose to take a longer tour, from 5 days for a trip to Lake Yamdrok to the southwest of Lhasa, or a six-day tour that will include Lake Namtso to the north. If you are thinking of traveling across the plateau to the wondrous Mount Everest, the world’s highest mountain, you really need to spend at least 7-8 days to make it worthwhile. 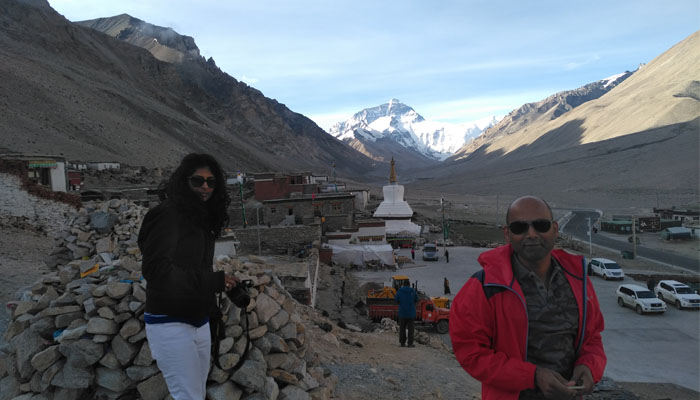 Get to Everest Base Camp make it worthwhile of tour Tibet.

The longer trips into the heartland of Tibet and out to the Everest Base Camp (EBC) require a few days of acclimatization in Lhasa before traveling. This gives you the time to get adjusted to the high altitudes and do some sightseeing around Lhasa. And the road out to EBC takes you through other cities too, with stunning monasteries and stupas, and the ever-present views of the spectacular Himalayas.

Travel time needed to get to Tibet from China

The travel time you need to get to Tibet from mainland China largely depends on your means of transport. If you are planning to fly to Tibet, then you can often be there on the same day, with the longest direct flights taking just 5-7 hours. Flights are the fastest way to travel, but are somewhat boring, and you miss out on some of the most stunning sights of northern Tibet by flying to Lhasa.

Trains to Tibet are the slower option for many tourists, though they do have their own benefits and good points. For trains from Xining and Lanzhou, the closest stations to Lhasa along the route of the Qinghai Tibet Railway, you need to allow only two days of traveling, as the trains take from 22-24 hours to reach Lhasa. However, from more distant departure locations, the trip to Lhasa encompasses three days, usually arriving in Lhasa on the third day after departure. 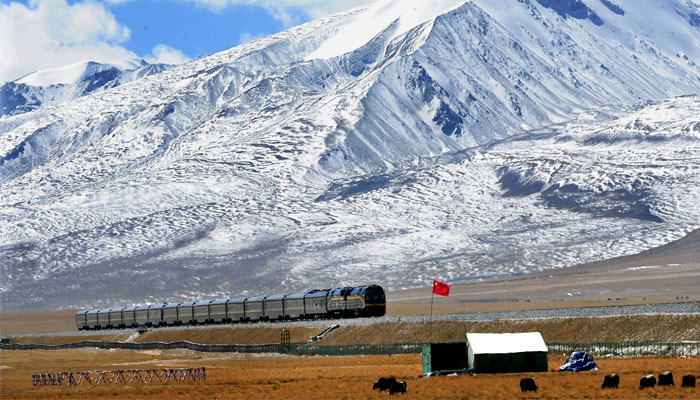 This normally means that, if you are flying, you can spend more time in China before traveling to Lhasa than if you are traveling by train. However, you do miss out on the stunning sights of traveling over the Kunlun and Tanggula Mountains, as well as crossing the Kekexili Nature Reserve and the vast Changtang Grasslands as you steam along to Lhasa by train.

Travel between cities in mainland China can be long and exhausting if you are traveling on normal trains. Often, the standard rail travel in China can take several days to go from east to west, such as from Beijing to Chengdu or Xi’an. And you will need to book sleeper cabins for these long trips in mainland China. However, with the massive network of high-speed trains now available in China, even long-distance travel can be cut down to hours instead of days. The high-speed rail network means that you can get from Beijing to Chengdu within the same day, and not lose out too much on your travel time.

The alternative to the high-speed trains are the domestic flights between the major cities in China. All of the major cities in China have their own airports, and with such a vast country to travel across, flying is one of the best options, though definitely not the cheapest. However, booking and taking flights in mainland China is relatively easy, and can get you where you need to go faster.

Best time to visit China and Tibet together

Knowing the best time of year to visit China for a trip around the entire country, including to Tibet, is important. You do not want to travel in the coldest or wettest times of the year, and need to know when the combined tour is best feasible. While Tibet and China can be visited throughout the year, and it is entirely up to you when you are free to travel, there are certain times of year when it is more comfortable than at other times.

Tibet is a four-season temperate climate region, and the rest of China has varying climates depending on the area of the country you are in. However, overall, the best time to travel to mainland China and Tibet together is from April to October, which is generally regarded as the main tourism period for most of China. 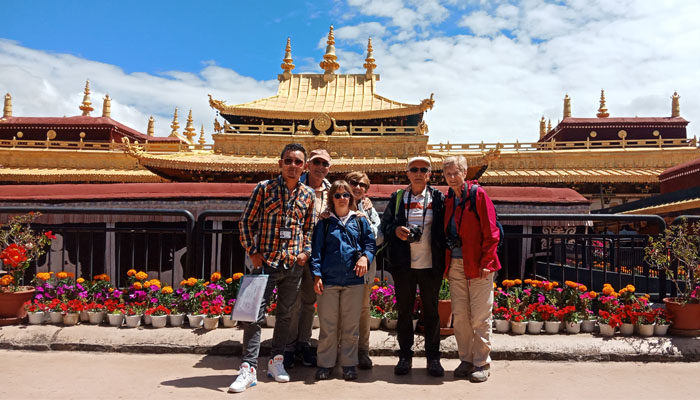 April to October is the best time to visit Tibet.

Across most of China, spring can be quite mild and generally dry, and is worth visiting both mainland China and Tibet. Autumn has a similar climate, with dry weather and relatively warm temperatures. Summer is the rainy season in Tibet and the south of mainland China, so you can expect some rains. However, the rains are not as bad as you may think for monsoon rains, and it is still possible to travel without getting wet. And summer in Tibet and mainland China can be pretty hot, so you will not need to worry about the thick sweaters as much. 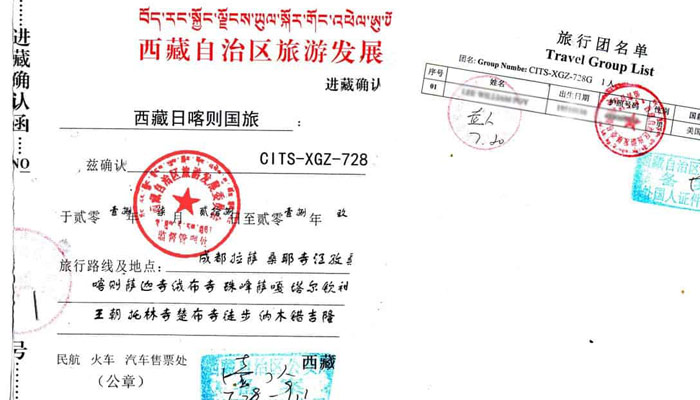 Our travel agency can help you with Tibet Travel Permit.

For mainland China, all you really need to obtain is your Chinese Entry Visa, which you can get from your local Embassy of the People’s Republic of China. Application processing normally takes around three working days, and you will need to have a valid passport, visa photos, proof of onward travel and hotel bookings, and proof of income in some cases.

Travel to Tibet is a little more complicated, and you cannot travel around the high plateau region independently. All tourists from outside China are required to be on a pre-arranged tour of Tibet with a registered Tibet travel agency. And only the travel agency can obtain the permits you require for the trip to Tibet.

For everyone traveling to Tibet, you will need the Tibet Travel Permit, which is required for entry to Tibet and travel in the area of Lhasa. This permit is only obtainable prior to your departure to Tibet through a local travel agency after booking a tour of Tibet. For those traveling outside Lhasa to Shigatse Prefecture, you also need to have the Alien’s Travel Permit, which is obtained once you arrive in Lhasa.

For those traveling further afield, such as Ngari or Nyingchi, you will also need to have the Restricted Areas Permit, for travel to areas that are military-sensitive. This is applied for in advance before you travel. And for those heading for Mount Everest or Mount Kailash, you will need the Frontier Pass, available in Lhasa after you arrive, and required for travel close to China’s borders in Tibet.

However, while all of this may appear to be complicated to arrange, there is an easy way to do it all. If you book with us on one of our China and Tibet tours, you can leave all the details to us, from your travel arrangements around the attractions and across the plateau to your hotels and accommodations in both China and Tibet. We will make all the arrangements for you, and all you need to do is turn up. The only thing we cannot do is apply for your visa to enter China in the first place.

Planning a tour of China and Tibet over two weeks does look like a complex affair. However, there are easier ways to do this. Once you have decided on how long you want to stay in China and where you want to go in both China and Tibet, you can just get in touch with us and we will do the rest for you. Planning such an epic adventure across the length and breadth of China need not be the hassle most people think it is.

Read More about How to Plan a Tour of China and Tibet in Two Weeks?

Be the First One to Comment "How to Plan a Tour of China and Tibet in Two Weeks?"