Which Train Route Should I Choose to Travel from China to Tibet?

Traveling by train from China to Tibet is one of the most amazing journeys in Asia, and is an adventure that makes your tour of Tibet even better. Not only do you get to relax while the train steams along on its long journey up to the Tibetan capital, but you get to see some of the most amazing landscapes and scenery in the world. There are seven routes to reach Tibet by train, including departures from Guangzhou, Shanghai, Beijing, Chengdu, Chongqing, Lanzhou, and Xining. Where you choose to depart from is entirely up to you, and you can choose based on budget, time, or location, to make your trip to Tibet as amazing as possible. So, for your awesome trip to Tibet by train, we have compiled some helpful hints and tips to help you choose the best train for you.

Xining to Lhasa Train Route is Most Recommended

While there are seven options for departure from mainland China to Tibet by train, the train route from Xining to Lhasa is most recommended. Xining, the capital of Qinghai Province in northwest China, is the start of the Qinghai Tibet Railway, the highest railway in the world and the most outstanding feat of railway engineering on the planet, so far. And there are a number of reasons why we recommend Xining as your best option for a departure location for the trains to Tibet. 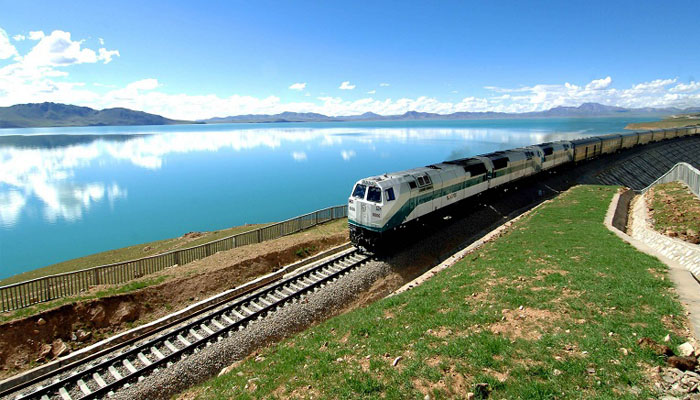 The trains from Xining to Lhasa are the shortest of all the trains to Tibet, and take just 21 hours 20 minutes to reach the Tibetan capital. Xining is the start of the 1,972-kilometer Qinghai Tibet Railway, also known as the Qingzang Railway, and all trains pass through Xining on their way to Lhasa. This means that you will only spend one night on the train, and can get all of the amazing experience of the plateau scenery in northern Tibet without the longer trips of three days across mainland China.

Being the shortest route to Tibet also means that the route from Xining to Lhasa is the least expensive route as well. There are two main classes of tickets for travelers on the trains to Tibet, excluding the mostly unwanted Hard Seats, and both the hard sleeper and soft sleeper tickets are the lowest prices of all the trains to Tibet. The hard sleeper ticket is the lowest cost, ranging from as little as 495 yuan (US$ 73.99) per person. Meanwhile, the soft sleeper ticket costs from as little as 781 yuan (US$ 116.74) per person. This is for the uppermost berths in both options, and the lower berths are a little higher in cost for each cabin type. But, if you get to Lhasa from Beijing, the ticket of hard sleeper and soft sleeper respectively cost from as little as 720yuan (US$102.70) and 1144yuan (US$163.19) per person.

The Most Beautiful Scenery

The train from Xining departs at around 2:00 pm and starts its run to the plateau through the afternoon, arriving at around 11:20 am the following day. By around 9:00pm, the train passes through Golmud and begins its long climb up to the plateau, and by the time the sun comes up, you are already close to Amdo in Northern Tibet. 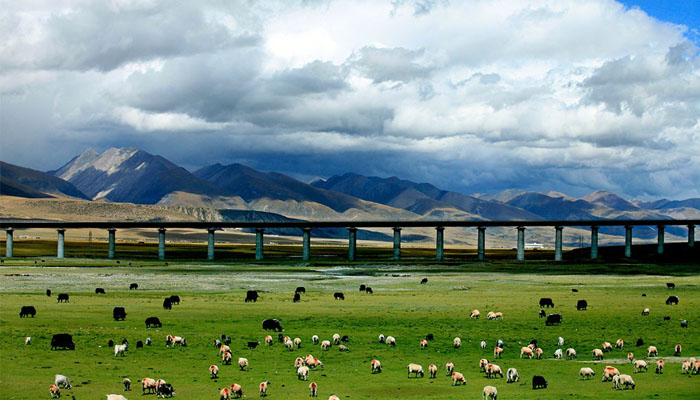 This overnight climb up to the plateau means that you get to view the best part of the stunning scenery, from the Tanggula Mountains to Lhasa, in daylight. After crossing the Tanggula Pass, the highest railway pass in the world, you will drop down to the plains of Amdo, and the vast Changtang Grasslands, which you will cross in daylight. You will get to see the huge area of these amazing prairies, and might be able to see some of the wildlife of the plateau, such as the wild yaks and the Tibetan antelopes. You also get to see the stunning landscapes and scenery as you pass through the amazing Nyenchen Tanglha Mountains, the closest of the Transhimalaya to Lhasa.

Easier to Get a Train Ticket

Since all of the trains pass through Xining, you have the choice of seven tickets that you can choose from for your trip to Lhasa. However, you will only be able to book tickets on the other six trains, for the period to Lhasa from Xining, in the low season. The advantage of boarding the train that departs from Xining is that this is the longest and largest train of them all. With more first and second class carriages, the train can carry half again as many passengers as any of the other trains, and you have a better chance of being able to get the dates of your choice for your trip to Tibet. 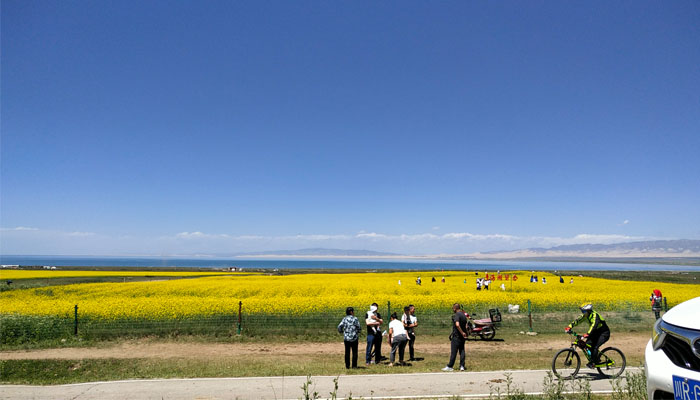 Spend a day in Xining and visit Qinghai Lake.

How to Get to Xining from Beijing, Shanghai, Guangzhou and Other Cities

If you arrive in China in another city than Xining, you can travel to the Qinghai provincial capital by train or flight. Almost all of the major cities in China have trains and flights to Xining, and you can usually get a flight or train to get you to Qinghai for your train to Tibet.

There are a huge number of cities across China that have direct flights to Xining, for those that arrive elsewhere but want to take the train from Qinghai Province. From the major cities that you may fly from for getting to Xining, flights are easily available, and are not overly expensive.

Flights run direct from Beijing several times a day, and cost from around US$ 165 for the 2 hours 35 minutes flight. From Shanghai, there are around eight daily flights, which cost from around US$ 186 per person for the 3 hour 45 minute flights. Chengdu and Xi’an also have daily direct flights to Xining, costing US$ 96 and US$ 63 respectively.

If you are planning a trip to Tibet and want to travel from Xining, but are in another city, then you can get a direct train to Xining from several locations across China. As well as the major trains to Tibet, you can also travel to Xining on normal trains from Beijing, Shanghai, Guangzhou, Chengdu, and Xi’an without any problems.

From Beijing, you have a choice of three trains to Xining, which run daily throughout the year. From Beijing, the trains take around 19 hours to reach the Qinghai capital, and can cos from as little as US$ 30 per person for seats. Sleeper trains are much more expensive, costing from as much as 54 dollars per person for hard sleeper berths.

From Shanghai, you also have three daily trains to Xining, which take between 12 and 14 hours to reach the city. Prices for hard sleepers start from 66 US dollars per person, with seats costing from as little as 35 dollars each. You can also get trains from Xi’an to Xining, which take around 11-13 hours, depending on the train type. Five trains run between Xining and Xi’an daily each way, and cost from around 31 dollars per person for hard sleeper berths.

How to Get to Xining from Overseas Cities

Another way to get to Xining when traveling from overseas is to fly direct to the city and take the train from there. Xining Caojiabao International Airport only accepts inbound international flights from Kuala Lumpur, Hohhot in Mongolia, Siem Reap in Cambodia, Nha Trang in Vietnam, Taiwan, and Japan. All other travelers need to change at an airport with international access or a domestic airport in China to reach Xining by flight. However, with only a few international airports able to offer flights direct to Xining, it is usually cheaper to travel to such cities as Chengdu, Xi’an, and Chongqing and then get the faster high-speed trains to Xining for the trip to Lhasa.

There are around six daily trains from Chengdu to Xining, though it can be hard to get a ticket for the trains in the peak season. From Chengdu, the trains take around 15 hours to reach the Qinghai capital, and can cost from as much as US$ 33 per person for hard sleeper berths. Alternatively, there are flights direct to Xining from Chengdu 15 times a day, which cost as little as 80-100 US dollars per person.

If you are planning a train trip to Tibet, then the route to use is the one that departs from Xining, rather than the ones that merely pass through. Not only is it cheaper and faster to depart from this Qinghai capital city, but there are more tickets as there are more carriages on the trains from Xining. And a stop in Xining for the day can help you acclimatize to the heights of Lhasa more easily. So, if you are planning a trip to Tibet, fly or take the train to Xining first, then enjoy the relaxing trip along the Qinghai Tibet Railway.

Read More about Which Train Route Should I Choose to Travel from China to Tibet?

Be the First One to Comment "Which Train Route Should I Choose to Travel from China to Tibet?"