How to Enjoy the Horse Racing Festival while Touring Tibet?

In Tibet, the Horse racing Festivals are some of the most popular festivals in the region, in terms of bustling activity and family days out. Originally begun by farmers and herders, these amazing festivals have since become a grand ceremonial extravaganza of games and performances, and even include Buddhist rituals and ceremonies.

If you happen to visit Tibet during the Horse Racing Festival, then you should not miss this article of useful guide to have smoother festival experience on the plateau.

When and where to go for the horse racing festival in Tibet?

Tibet and the Tibetan-occupied areas have four major horse racing festivals throughout the year. In the north, you have the most famous Nagchu Horse Racing Festival, held on the vast Changtang grasslands every year. Lasting for up to 15 days in total, the Nagchu festival is held in late July to early August, depending on the summer weather.

In Central Tibet, the Gyantse Dama Festival is a celebration of horse racing and archery held in the area around Gyantse. Dating back more than 500 years, the festival is held in the fourth month of the Tibetan calendar, which is usually in June to July in the solar calendar.

Just across the boundary in the Tibetan areas of Qinghai, you can visit the famous Yushu Horse Racing Festival of the Amdo people that live in Qinghai. Held on the 25th July every year, the festival lasts for around eight days.

And in Sichuan Province to the east, you can find the Kham-inspired Litang Horse Racing Festival, held on the Litang grasslands to the west of Chengdu. The festival begins on August 1 every year, and lasts for three days.

What to see and experience during horse racing festival?

While there are many things that these festivals have in common, from racing horse and shows of horsemanship, each is as individual as the people that attend them. Each individual horse racing festival has its own different features, and each is well worth spending some time to visit during your tour.

The single most popular horse racing festival in the Tibet Autonomous Region, the Nagchu Horse Racing Festival is the most magnificent and extravagant of them all. Held on the beautiful Changtang grasslands in the north of Tibet, in Nagchu Prefecture, these three days are some of the most amazing in Tibet for fun and festivities. The festival is held some 320 kilometers north of the Tibetan capital of Lhasa, yet many people travel all the way to Nagchu to attend this spectacular event. 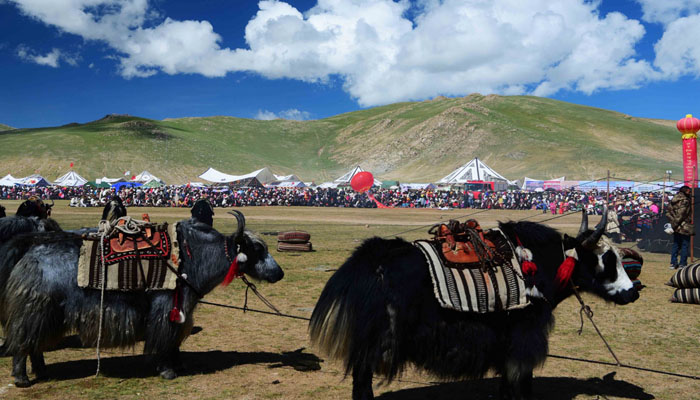 The festival, as with all horse-based festivals, is a chance for Tibetan horsemen to show off their talents, their horsemanship, and their abilities. And for those not performing or racing, it is a chance to show their wares, or trade for tools and goods, and enjoy the variety of folk activities and Tibetan operas. Every year, huge tent city grows out of the vast grasslands of northern Tibet, and the people dress in their finest clothes to enjoy the horse racing, yak racing, horsemanship shows, opera performances, archery contests, and the singing and dancing.

The festival opens with a grand ceremony on the first day, held by the monks of the local monasteries, before continuing with the festivities of the event. For those not competing in horse or yak racing, there are archery contests, tug-of-war competitions, rock-carrying challenges, and other sports. And for those who are just visiting as spectators, there are song and dance performances, Tibetan operas, and a vast open-air market for trading wares and making new business deals.

Held in the Central Tibetan area of Gyantse, to the southwest of Lhasa, the Gyantse Horse Racing Festival (also known as Gyantse Dama Festival) began its life as an athletic contest in the 15th century. Time and tradition turned the contest into a festival of horsemanship and racing, with all the accoutrements that go with horse-based festivities in Tibet. Now, this amazing and ancient festival is one of Central Tibet’s most popular events, and has become a major festival for much more than just horse racing.

The festival is held on the grasslands outside the city of Gyantse, which was once the largest town in Tibet, and features a wealth of activities, from horse racing and horsemanship performances to local competitions and performances. Traditionally, the festival is held during the fourth month of the Tibetan calendar, and is one of the best summer festivals you can attend near Lhasa. 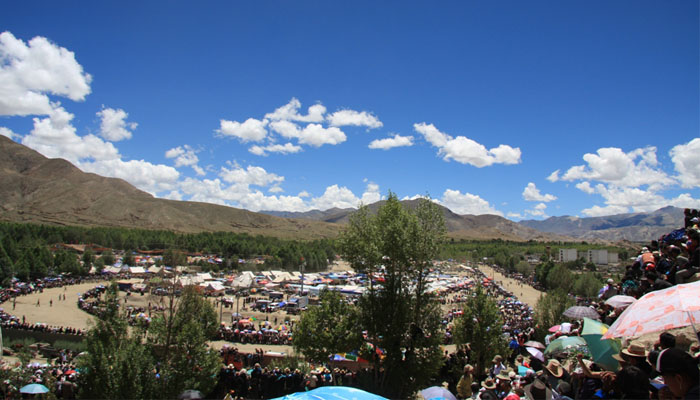 Gyantse Horse Racing Festival is one of the best summer festivals you can attend near Lhasa.

As well as the horse racing contests, you can see performances of Tibetan horsemanship, decorated horse competitions, yak racing, wrestling contests, archery competitions, track and field events, ball games, and the traditional Tibetan operas and song and dance shows. The festival is also a fair for many businesses and traders, and you can see hundreds of local products for sale, and local businessmen making their deals for the year.

The first of the Horse Racing Festivals held outside the TAR, the Yushu Horse Racing Festival is held annually on the plains of Qinghai Province to the north of Tibet. Once a region of Amdo in the days of the Tibetan Empire, this part of Qinghai Province is heavily populated with Tibetans. The festival makes good use of the warmer weather of summer in the north, and is traditionally held in the beginning of August in the solar calendar each year. The lush green grass of the prairies is perfect for this amazing event. 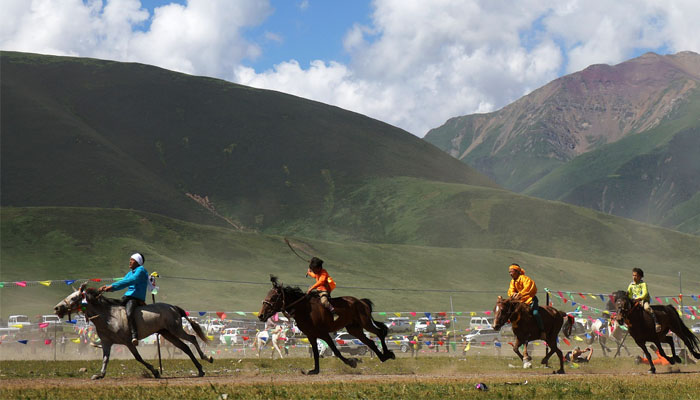 Yushu Horse Racing Festival is held annually on the plains of Qinghai Province to the north of Tibet.

Beginning with Buddhist ritual ceremonies, the festival is another excellent example of the horsemen of the Tibetan plateau and their amazing feats of courage and daring. As well as the usual horse and yak racing, the festival features performances of horsemanship, from grabbing hada from the ground at a gallop to horse-dancing performances akin to the western dressage events, where the horses perform steps and movements that are not typical of horses. The events also include races and performances by the kids of the horsemen, training for their own futures as horsemen at the festival.

A huge tent city springs up on the prairie weeks before the festival, as nomads and herders begin to come in from all across the plateau for the festival. The festival has become hugely popular for visiting tourists, and the performances of Tibetan opera and song and dance, as well as the local contests of strength and endurance, are just as popular as the racing. 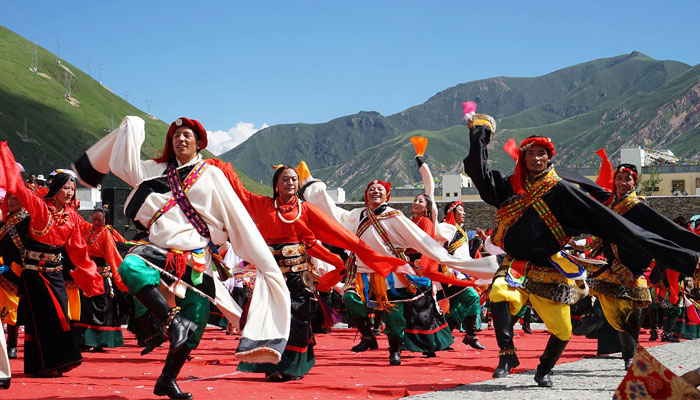 Held on the grasslands of Litang in Sichuan Province, the Litang Horse Racing Festival is held annually from the 1st to 7th of August in the solar calendar. One of the traditional Kham festivals from eastern Tibet, this is a time for Khampas from all across the plateau to come and trade goods.

As with most of the other horse racing events in Tibetan areas, the Litang festival also hosts horse racing, yak racing, and horsemanship shows, as well as many other contests and competitions. These usually include tug-of-war, wrestling, archery, and many others. The festival also includes a trade fair, where you can find all kinds of memorable souvenirs, as well as plenty of local food and traditional arts and crafts from the nomadic herders. 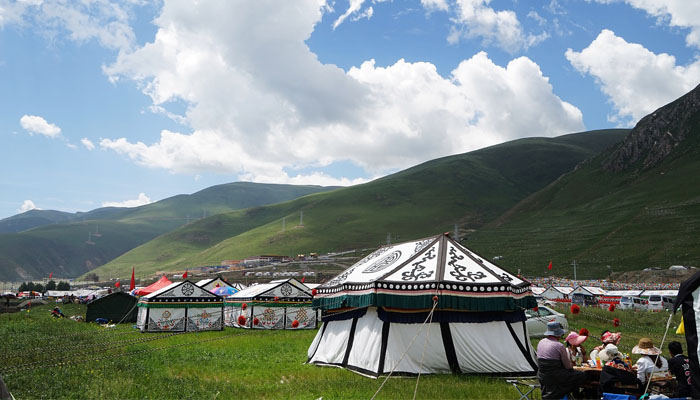 In Litang, there is more emphasis placed on the honor and prestige of winners, and the festival is significant in the socio-hierarchy of the Khampa society. Most of the contestants in these races and contests are Khampa nomads, who spend their lives with their herds and horses, which makes winning all the more important to them for their social standing.

Horse racing festivals in Tibet are more than just festive events. They are also trading events, with a huge emphasis on the social structure of Tibetans. With the Tibetan operas and other activities and performances, these events are the main events of the social calendars of many Tibetans, and for some, the only time they come in from their nomadic lifestyles to trade with others and enjoy some socializing.

For tourists visiting the festivals, you can be included in the festivities by taking part in a passive manner, such as dressing appropriately in local costume, joining in with a family to attend the festival, and cheering the players as they race down the fields. You can also contact your travel agency to arrange a festival tour with horse racing festival experience, based on your situation and preference.

Horse racing festivals are some of the most outstanding events in Tibet, and while they are not religious at all, there are usually some Buddhist ceremonies to get them started. For visitors, they are an amazing way to understand the unique culture of the Tibetan people better, as they show all aspects of the lives of Tibetans, as well as how they enjoy having fun. So if you are thinking of planning a trip to Tibet, try going to one of these awesome festivals.

Be the First One to Comment "How to Enjoy the Horse Racing Festival while Touring Tibet?"