What to Do and See While Touring Tibet during Shoton Festival?

One of the grandest festivals in Tibet when it comes to gaudiness and color, the Shoton Festival is an ancient celebration that has moved with the time and has become a more modern Buddhist celebration. Originally a solely religious ceremony, this popular festival is now a blend of religious ceremony, social activity, and the Tibetan love of eating and having fun. Shoton means Yogurt Banquet in Tibetan, and the festival celebrates the end of the 100-day fasting of the monks with donations of yogurt. So what to do and see if I travel to Tibet during Shoton Festival? Here we will show you the top experiences to enjoy during this grand event as follows.

See the Unveiling of the Giant Thangka

The opening ceremonies of the Shoton Festival in Lhasa are held in the Drepung Monastery, the primary monastery of the Gelug tradition of Tibetan Buddhism. The ceremonies in preparation for the festival last for a couple of days, and on the first day of the festival, a giant thangka painting is unveiled at the monastery. Brought out to a fanfare of Suona, the giant 500 square meter thangka is carried out rolled up on the shoulders of the senior lamas of Drepung, and regally transported to the vast framework on the hillside behind the monastery.

As the sun crests the horizon, the thangka painting is unfurled down over the frame, and the crowds that gather to watch in their thousands cheer and begin to pray at the hem, throwing white silk hada on the stunning example of Tibetan Buddhist art. The thangka depicts the Buddha Sakyamuni in the lotus, surrounded by other Buddhist deities. An immense piece of ancient sacred artwork, the thangka is an inspiring and overwhelming sight, and is one of the largest of its kind in existence. 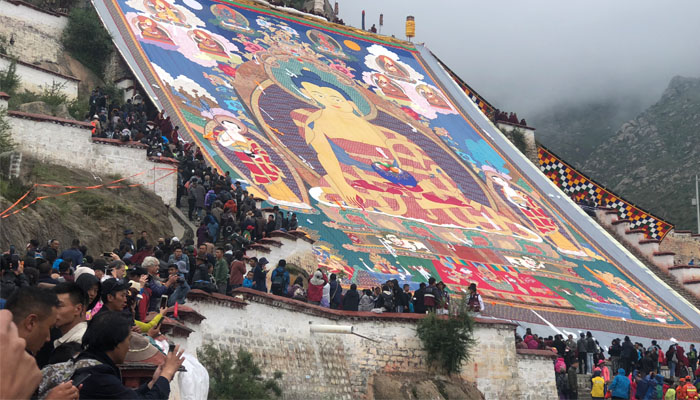 The crowds gather to watch in their cheer and pray at the hem of Thangka.

As the Thangka Unveiling ceremony is not that long, you can spend time after looking at some of the other amazing attractions Lhasa has to offer. A little way down the hill from Drepung Monastery lies the small temple of the State oracle, at Nechung. The oracle is an important part of the system of Tibetan Buddhism, and is consulted on major issues, including the finding of the new Dalai Lama reincarnation.

You can also spend some time exploring such amazing sites as the Jokhang temple, and walking around the kora on Barkhor Street, with thousands of other pilgrims that make this ritual on the first days of the festival. Yo ucan head inside the temple to explore its sacred halls, and to see the famous Jowo Rinpoche, possibly the oldest known statue of Buddha in existence. It is even said that the statue, which was brought to Tibet by princess Wencheng in the 7th century, was blessed by Buddha himself.

Tibetan opera, known in the region as Ache Lhamo, is a unique kind of performance art that has been a major part of Tibetan culture for thousands of years. The performances are normally centered on a form of simple narrative and dialogue, sometimes injected with a little comedy and satire. The performances are held every year in the major sites in Lhasa, and are an integral part of the modern Shoton Festival.

Performed by both amateur and professional opera troupes, the main venue for the Ache Lhamo is in the Norbulingka Palace grounds, one of the most beautiful park areas in Tibet. The operas are performed individually, but are often shortened versions of the originals, which could often last for days each. One of the most outstanding experiences in the world, these stunning dance acts are one of the most colorful exhibitions in Tibet. 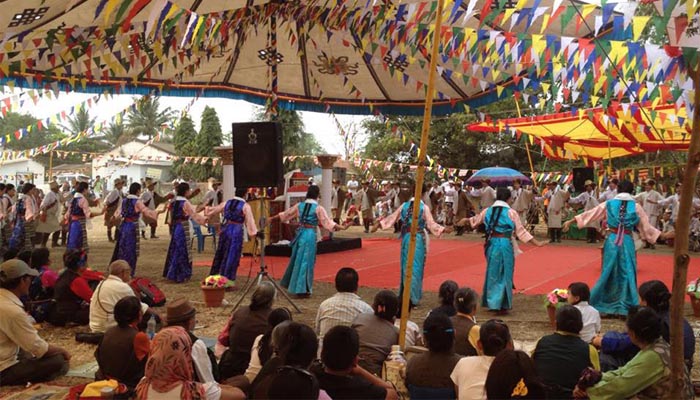 Tibetan opera performances is an integral part of the modern Shoton Festival.

Horse racing has long been an exciting activity for Tibetans, and since the early days of the Tibetan Empire, racing horses has been a popular sport and competitive event. The Shoton Festival has its own horse races, which are held in the grounds of Norbulingka, and feature some of Tibet’s most accomplished horsemen. As well as racing, you can see performances of horsemanship and some amazing feats of balance and daring performed by these awesome horsemen from across the grasslands of Tibet.

The horses and riders at the festival are all colorfully dressed, with the riders in their best and finest military outfits. The horses are similarly decked out in colorful finery, with braids and ribbons. The small horses used on the plateau are fast and well-paced, and race around the track at full tilt, while their riders often balance out on one side to grab an item from the ground as part of the races. 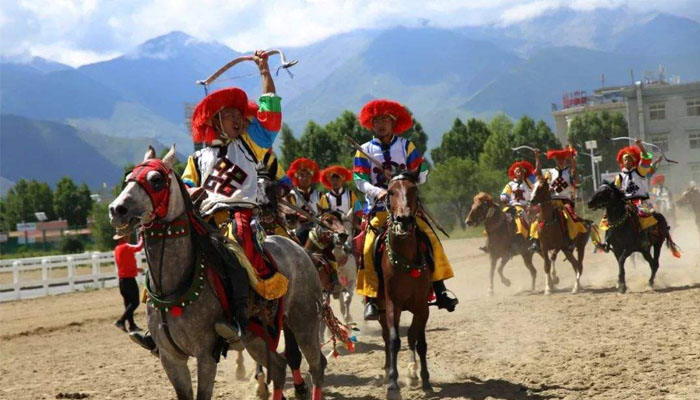 And it is not just horse racing you will get to see at the Shoton Festival. Yak racing is also a prominent feature of the events. The yaks are decorated in festive colors and are ridden in races that are as popular as the horse racing albeit often a lot more dangerous as the beasts thunder around the track.

Eat Yummy Yoghurt in the Park

Yogurt in Tibet is the main reason behind this spectacular festival, so it should come as no surprise that there is always plenty of it to go around, even if you did not bring your own. Yogurt is available all over the city during the festival, and it is three days of constant eating and festivities for the locals and any tourists that are visiting.

The yogurt used in Tibet is not the original gift given to the monks at the end of the fasting period, and was used to replace the original milk curds over the centuries. The yogurt is all home made in Tibet, and for families attending the festival, they will make their own cultivated yogurt, sometime spending weeks on the top of a mountain to aid in the spiritual aspect of the yogurt’s growth. Families will then head for the park and spend their days relaxing, eating yogurt, and enjoying the sports, Ache Lhamo, and festivities. 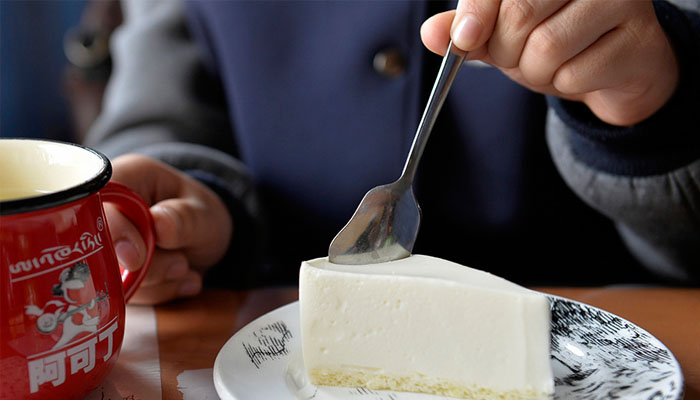 Celebrate the Shoton Festival this Summer with Locals!

Shoton Festival is not just a religious event, though it did start that way. Nowadays, the festival is as much a social event as a religious one, and the locals love to go to the park during the festival and enjoy picnics while they watch the operas, the horse races, and the other enjoyable activities.

For anyone that really wants to learn more about the festival and the religious culture of the Tibetan people, a visit to the park in Norbulingka is a must. Along with the Tibetan operas, the horse racing and showmanship events, the yak racing, this stunning natural park inside the grounds of the palace is one of the best places to feel the real energy of the festival, the people. Families spend days inside the park, often camping in small tents to spend as much time at the festival as possible.

For tourists who take a trip to enjoy Shoton Festival, there is nothing better than a chat with local people to help you understand the festival, the people, and the entire culture. A visit to one or two of the families in the festival will always be welcomed by them, and you will be able to see how a real Tibetan family enjoys the delights that this unusual festival has to offer. And you can even try out a couple of different styles of family-made yogurts. 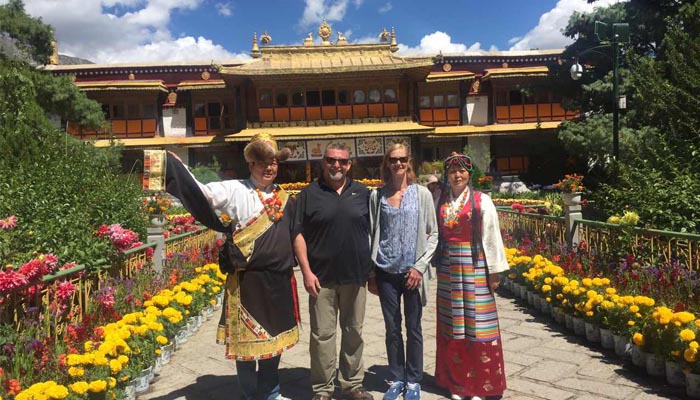 Nowadays, the Shoton Festival is as much a social event as a religious one.

If you decide to book a festival tour that coincides with the dates of the festival, you will also have plenty of time to spend on other activities in Tibet, including traveling to EBC in the far west, on the border with Nepal. You can enjoy the city of Shigatse and the Tashilhunpo Monastery, as well as the famous Gyantse Kumbum in the Pelkor Chode Monastery, and travel alongside Lake Yamdrok, before admiring the pristine Karola Glacier.

The Shoton Festival in Tibet is one of the most sumptuous of all Tibetan festivals, and is held mainly in Lhasa, though you can see some celebrations in other parts of Tibet. Lhasa, and specifically Drepung and Norbulingka, are the main places to be for this amazing festival, and you can really enjoy the relaxed and fun atmosphere. So if you are planning a trip to Lhasa, maybe you can choose to go during the festival time to experience more in addition to the routine activities.

Be the First One to Comment "What to Do and See While Touring Tibet during Shoton Festival?"