The Tibetan New Year, also known in Tibet as Losar, is the single most important festival of the year. Beginning on the last day of the previous year, the festivities last for up to 15 days, though most of the best parts of Losar occur within the first three days. A colorful and eventful celebration of new beginnings and new hope for the year ahead, Losar is a time of feasting, exorcism, and offerings to make the coming year as auspicious and beneficial as possible.

So, how is this grand festival like? What to enjoy during Tibetan New Year? Read this article to find guides for a better festival experience you may have in Tibet.

When is Tibetan New Year Celebrated?

The actual date of the Tibetan New Year changes in the Gregorian calendar, depending on the number of months in each Tibetan year. As the Tibetan calendar generally uses the lunar progression of the calendar, occasionally, there are 13 months in the Tibetan year, to make up for the additional days in the solar calendar. This means that the date can be up to a month earlier or later than the previous year, depending on the Tibetan Buddhist calendar. For 2020, the festival began on February 24, which is almost a month later than in 2019.

The celebrations for the New Year generally begin with the preparations, which start a few days before the first day of the year, and end with the Butter Lantern Festival on the 15th day of the first month. The main days of the festival are normally the first three, which are when most of the festivities and celebrations, as well as the religious ceremonies, are held. This is the best time to travel to any of the Tibetan-inhabited regions of China for the festivities, and the most enjoyable for tourists interested in learning more about this amazing celebration.

What to Do and See during Tibetan New Year?

Traveling to Tibet for the Losar festivities is a unique experience unlike any other in the world. It gives you a chance to enjoy the celebration in the same way that locals do, or just enjoy watching the festivities of the various activities in Lhasa while wandering around the city.

As one of the most important customs of Losar, Tibetans buy new clothes to wear during Losar, and on the streets and in temples, they will wear their finest traditional dress. These traditional costumes often vary from area to area, so if you are in Lhasa, you can see a variety of different costumes being worn around the city. And if you really want to take part in this custom, you can find plenty of shops that will hire out traditional costumes for the day, so you can blend in with the locals in the celebrations. 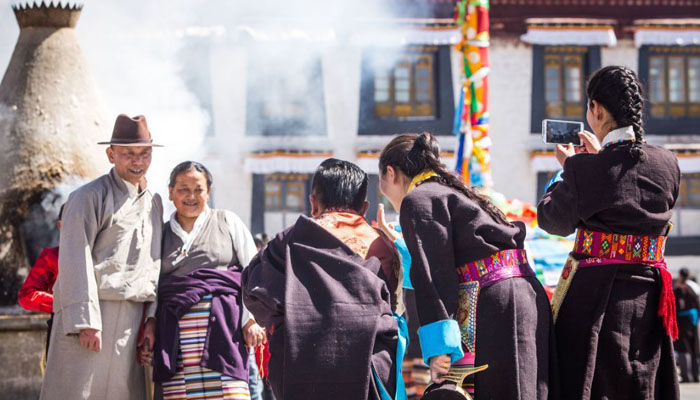 The locals dressing in traditional costumes are celebrating the Tibetan New Year.

Buddhist ceremonies are a major event at New Year, and the second day of the New Year is normally when families head for the temples to pray and give thanks. Tibetan Buddhists head for the monasteries and temples to pay tribute to leaders and kings, and offer gifts to the monks and lamas. They also take part in the religious purification ceremonies, which usually consist of burning juniper branches to produce aromatic smoke. These ceremonies are an ideal way to understand more about Tibetan Buddhism and the whole aspect of Tibetan culture. 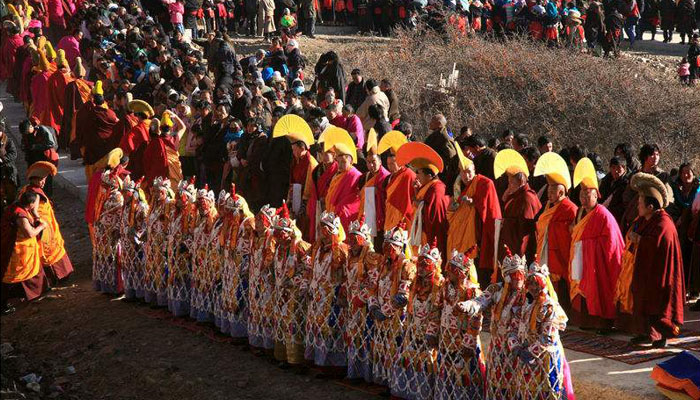 Tibetan dancing is a norm for almost any festival in Tibet. And while many are the Cham dances performed by monks to teach important aspects of Tibetan Buddhist scriptures, some are just for the traditional Tibetan love of dancing. You can watch the dances throughout all three days of the festivities in a variety of locations around Lhasa, including the squares in front of the Jokhang Temple and the Potala Palace.

Prayer flags are an important aspect of Tibetan Buddhism, and it is traditional to change the prayer flags in front of the Jokhang Temple every year. Regarded as symbols of peace and used to deliver blessings around the world, carried on the winds, the changing of the flags outside the temple is significant of the New Year and new beginning. Every year, dozens of people gather at the temple to change all five lines of prayer flags simultaneously, to ensure the blessings of the new flags do not get entangled with the old flags.

Seeing the butter lanterns at the end of the festival is one of the most outstanding sights in Lhasa, and if you can stay long enough, it is well worth the time. The 15th day of the New Year is the Butter lamp Festival, which celebrates the victory of Buddha in the great debate in Sravasti is India, more than 2,500 years ago. Known in Tibet as the Monlam Festival, the best place to see the lit lamps in Lhasa is along Barkhor Street, where every rooftop and window ledge is covered with the carefully sculpted butter lanterns.

What to Eat during Tibetan New Year?

The eve of Losar is a very important day, and is when families gather to eat the traditional Guthuk, the stew with dumplings filled with a variety of items to signify what the year will bring each person. Each item in the dumplings represents a factor of the person’s personality or their future. Coins often signify good fortune in the year ahead, while a chili in your dumpling often symbolizes a mean and harsh nature. And the stew is delicious, so it is worth trying, just for fun. 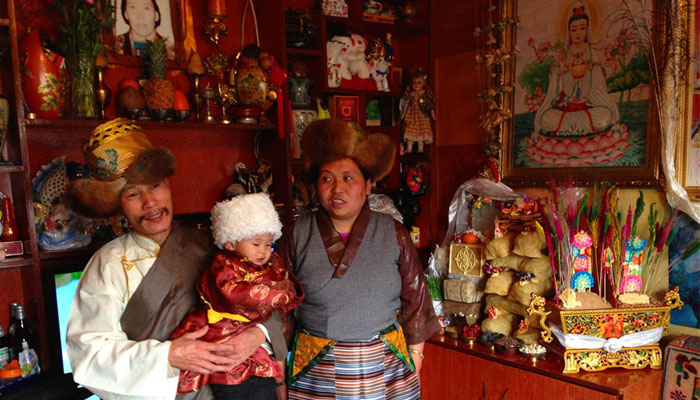 A Tibetan family has prepared rich food to celebrate the Tibetan New Year.

The Tibetan New Year festivities are always accompanied by extravagant feasts that often consist of such delicious foods as momos, thenthuk, the hand-pulled noodles famous in Tibet, and lots more. Food is of huge importance in the Tibetan celebrations of Losar, and you can find plenty of other dishes containing plenty of meats, including yak, duck, and chicken, as well as lots of fresh fruits and vegetables.

Celebrations of New Year around the world are normally accompanied by drinking, and in Tibet it is no different. The big difference is what you drink. In Tibet, Chang, or Tibetan barley wine, is drunk throughout the celebrations, and is one of the most popular local drinks for Tibetans. An indispensable beverage for New Year celebrations, everyone drinks it, from old to young, male or female. While it does not have a high alcohol content, it is drunk in large quantities, and leaves you with a nice warm feeling, great for keeping out the cold.

While the Losar festivities are celebrated throughout almost all of the plateau region, there are some great places to spend your time in Tibet during the New Year. Most of the major festivities are found in Lhasa, the Tibetan capital, and there are some wonderful places to visit in the city during the festival. One can take a classic Tibetan New Year festival tour that covers these highlighted places.

The Potala Palace is one of the most popular places for tourists to visit during Losar, and for many Tibetans, either the Potala Palace or the Jokhang temple are the most popular places to visit for prayer on the first day of the New Year. Pilgrims make their way to the top of the steps leading up to the palace, and head inside to light butter lamps before taking in the view from the heights of Moburi. 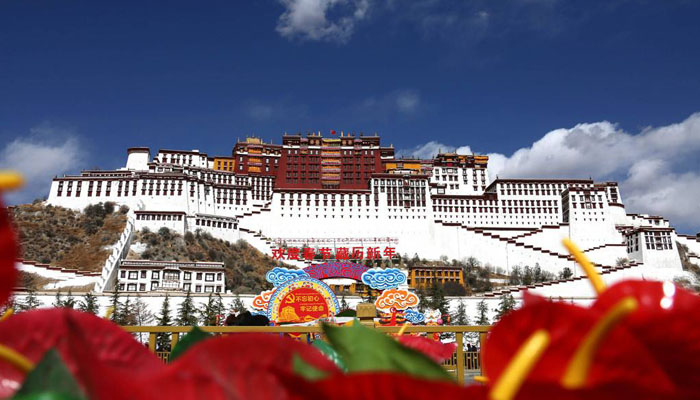 And the Jokhang Temple with its Barkhor Street kora is another good place to experience some of the great features of Losar. One of the main centers of the celebrations of the New Year, the temple is the focus of pilgrimage for thousands of Tibetans during the festival. Crowds of devout Tibetan Buddhists line up in front of the temple to head inside to pray before performing the ritual kora around the temple, following the roads of Barkhor Street. And for anyone visiting, it is an amazing experience to join them on their pilgrim’s walk around the most sacred temple in the world. 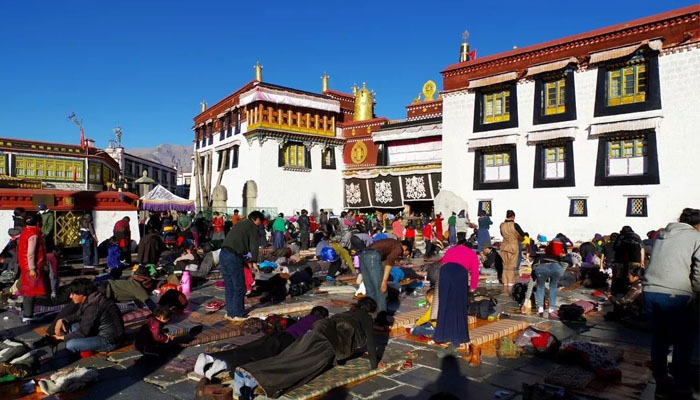 Tibetans head to the Jokhang Temple to pray during Tibetan New Year.

The Tibetan New Year is an unforgettable experience for anyone lucky enough to be able to visit Tibet during the Losar celebrations. From the beauty of the people, out in their finest clothes and best traditional costume, to the devotion to the religious rites and ceremonies, enjoying a festival tour during this most important of Tibetan celebrations is the best way to learn more about these unique people and their extraordinary way of life on the Roof of the World.