Generally, summer months from June to August are the rainy season of Tibet. But this does not put a dampener on the fact that they are the busiest months of the year in Tibet for tourism. With cool weather, moist air, ample oxygen content, the conditions are perfect for travelling almost anywhere on the plateau. While there are a lot of places you can visit in Tibet during this period, there are some that do deserve a more detailed mention. Read this passage to pick out the best travel route for your summer trip to Tibet.

June to August is the time when Lhasa has the best climate, with the highest oxygen concentration, and the most beautiful natural scenery. The city will be very cool and comfortable in summer time. There is occasional wind and bright sunshine. Although July and August will see the most concentrated rainfall in Lhasa, it usually rains at night and has little effect on travel.

A visit to Lhasa is one of the most amazing experiences during your Tibet tour, and gives you a unique insight into the lives of the Tibetan people in this stunning City of Sunshine. For most visitors, a four-day Lhasa city tour is the most popular option, which gives you plenty of time to explore this amazing city on the roof of the world. You can visit a wealth of attractions here, including the amazing Potala Palace, perched up on its high Red Hill overlooking the city, and the Jokhang Temple, housing one of the oldest known statues of Buddha, said to have been blessed by the Buddha himself. 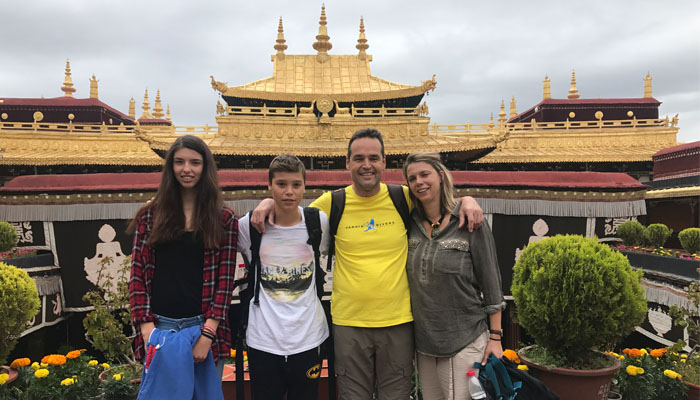 Jokhang Temple is always a must-go destination during your Tibet summer tour.

A trip to this city in summer also means you get to experience the kora around the Jokhang Temple in brilliant sunshine and warm weather, so no more need for thick sweaters and gloves. A tour of the capital also normally includes a trip to two of the three most important monasteries in the Gelug tradition of Tibetan Buddhism, Sera and Drepung. While Sera is the perfect place to experience the unique debating arena of the Tibetan Buddhist students, Drepung was once the original seat of the Dalai Lama.

Located some 100 kilometers to the north of Lhasa, in Damxung County on the boundary with Nagqu Prefecture, Lake Namtso comes into its own in summer, as the last vestiges of winter have at last receded from this Heavenly Lake. As an extension to the normal tour of Lhasa, adding a couple of days to head north and visit Lake Namtso is an unforgettable experience, in more ways than you may expect.

One of the Great Three Sacred Lakes of Tibet, Lake Namtso sits between the vast mountains of the Nyenchen Tanglha range of the Transhimalaya and the immense Changtang Grasslands, which stretches across the whole of northern Tibet, all the way to Ladakh in the west. Sitting in plain view of the Peak of Nyenchen Tanglha Mountain, these legendary spiritual lovers guard the vast pastures and the yaks that roam across them.

While staying overnight at the lakeside, you can explore along the banks of this sacred lake, and even walk around the unique kora of the Tashi Dor Monastery, on one of the small island peninsulas of the lake. The monastery includes a number of meditation caves, which have links to both Padmasambhava and Milarepa.

Even the journey back to Lhasa is exciting, as you can stop off at the famous Yangpachen Hot Springs to relieve some of the aches of the body for a couple of hours. These natural hot springs are the most popular in Tibet, and you can enjoy the views of plains and mountains as you relax.

Lying far out in the west of Tibet in the remote Ngari Prefecture, Mount Kailash is renowned as the most sacred mountain in the world. Held in high regard in four separate religions, the mountain is considered to be the earthly representation of the legendary Mount Meru, the mountain of the gods at the center of the universe. A stunning sight in the shape of a pyramid of unusual black rock, Mount Kailash is good destination for visiting in summer. 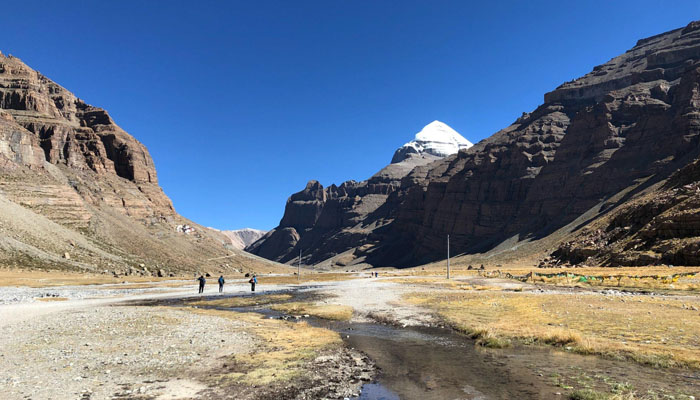 Mount Kailash is an ideal destination for visiting Tibet in summer.

While other parts of Tibet are already experiencing the first glimmers of the monsoon, Mount Kailash barely even has a mist over the mountain, and the weather in this part of Tibet is ideal for trekking. Warmer temperatures prevail, reaching up to around 19 degrees on warm days, and remaining above freezing at night for the first time in months. And the clear skies make views of the mountain’s un-trodden summit even more spectacular. Without extreme weather and severe cold, summer season is one of the best times of the year to attempt the Mount Kailash Kora trekking.

Most travelers that are taking longer tours of Tibet have a visit to the world’s highest mountain in mind. And there is nothing like standing in the shadow of this massive peak, in the base camp at the foot of the famous, and infamous, Mount Everest.

Summer is one of the best times of year to visit Mount Everest, as the weather is warm and pleasant, and the bright sunshine allows for the best views of the summit of this huge peak. Although the higher rainfall in July and August will block the peak view of Mount Everest at some cases, tourists can choose to get to EBC on clearer days after checking the weather in advance. 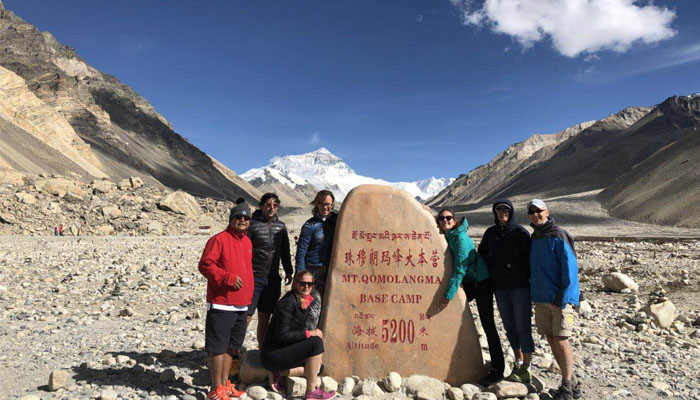 Summer proves to be one of the best times of a year to visit Mount Everest.

Also, you can choose the month of June to get to Mount Everest. June will be more favorable to make the trek from Old Tingri to EBC, with the weather being ideal for hiking, and the landscape around the mountain just starting to turn green, from its winter dull brown and grey colors.

Whether you run from Lhasa to Kathmandu, or Kathmandu to Lhasa, summer is a good time to take the long tour overland across the border with Tibet’s closest neighbor. Nepal sits on the other side of the Himalayas from Tibet, and has ties to the region that date back to long before Buddha was even born. Nepal is also the only country in the world that has international direct access to Tibet in China. Tibet’s only international border crossing is located at Gyirong Port, and is the gateway to Tibet from Nepal, for anyone traveling into the region from Kathmandu. 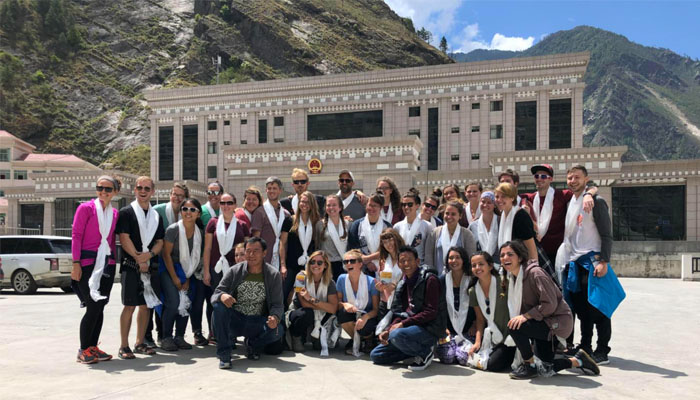 An overland trip from Lhasa to Kathmandu is an awesome adventure in summer.

An overland trip, whichever way you do it, is an awesome adventure that takes you on an epic journey of discovery between two of the most amazing capital cities in the world. The trip crosses the border in one of Tibet’s most stunningly beautiful valleys, known as the Garden of Everest, and takes you to some of the most outstanding sights on the plateau, including Mount Everest.

June will be the prime time for driving across the plateau between Lhasa and Kathmandu, considering the clear skies, warm temperature and few rainfalls. But July and August are also befitting if you don’t mind the rain. In fact, most part of the whole road route is well paved, expect for the short section from Gyirong Port to Nepal, which will be affected by strong rainfall. Just keep your eyes open on the weather condition before your drive out.

An extended Tibet tour that includes Shigatse is normally around six days, which allows you to travel out of the capital to the second city of Tibet, and the home of the famous Tashilhunpo Monastery. Located around 300 kilometers to the west of the capital, Shigatse is the location of one of Tibet’s most amazing monasteries, which is also the seat of the Panchen Lama, Tibet’s second highest religious incarnation. The monastery was built in the 15th century by the first Dalai Lama.

This epic adventure to Shigatse also includes a visit to Gyantse along the way. Here, you will get the chance to see one of the most unusual and unique stupas in Tibet. Known as the Gyantse Kumbum, this 32-meter high stupa has 108 chapels containing more than 10,000 images of Buddha, and is the only one of its kind in Tibet. 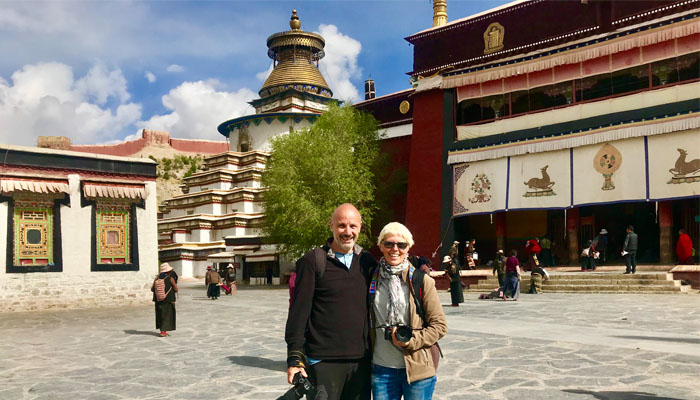 Pay a visit to Gyantse Kumbum along the way from Lhasa to Shigatse.

Another option for tourists to Lhasa is the trip out to Lake Yamdrok, which lies around 110 kilometers to the southwest of the capital, in Shannan Prefecture. After the excellent tour of the capital, you can get out onto the road to take a short day trip to one of the most important lakes in Tibet. This beautiful turquoise colored lake is one of three sacred lakes in Tibet, the other two being Namtso and Manasarovar. Stretching out over a vast area, this beautiful lake is well worth visiting, and in June, is at its most glorious.

No matter where you go in Tibet in summer season, you are bound to have the time of your life. From the wonders of Lake Yamdrok and Lake Namtso to the heights of Mount Kailash and Mount Everest, a trip to Tibet in summer will give you the ultimate plateau experience that is second to none. So if you are unsure of when to visit Tibet, come in June, July or August, and enjoy the best that the Roof of the World has to offer.

Be the First One to Comment "Most Recommended Travel Routes for Visiting Tibet in Summer (Jun. Jul. Aug.)"