What Are the Top Experiences to Expect for Touring Nyingchi in Tibet?

Nyingchi is the most eastern prefecture of Tibet, lying in the lower altitude areas to the east of Lhasa and west of Sichuan Province. One of the most beautiful areas of the plateau region, this stunning land is renowned for its likeness to the Swiss Alps in Europe. For a long time, Nyingchi has not been as popular as Lhasa and EBC, and this spectacular area of Tibet has been hugely underrated. However, as one of the most beautiful and scenic locations in China, a trip to Nyingchi prefecture is well worth the time it takes to get there. With hundreds of natural attractions to choose from, you will be spoilt for choice in these spectacular alpine landscapes in eastern Tibet.

Nyingchi has some of the most wide-ranging attractions in Tibet, from Buddhist monasteries and high mountains to stunning lakes, exotic meadow forests, pristine glaciers, and even the world’s largest and deepest canyon. And while you do have literally dozens of attractions to visit in Nyingchi, there are a few that are a head and shoulders above the rest.

Spring in Nyingchi is the time for the stunning peach blossoms, which come into their own sometime in April every year. While the time of the festival does depend on the blooming of the peach blossoms, the festivals held in the various areas of the prefecture are well worth changing your plans for. 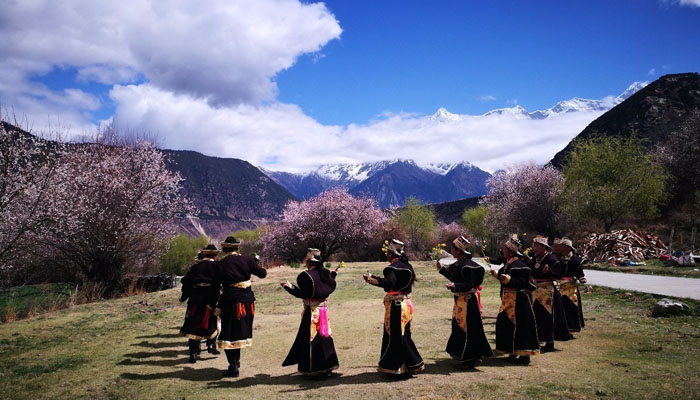 The festivals are not traditional Tibetan festivals, and have only been going since 2002, as a way to celebrate the beauty of the area and promote tourism in this often-unknown area. However, they do have the aura of the traditional festivals, with Tibetan operas, archery contests, horse racing, and flower shows, as well as the traditional plentiful food in its wide varieties and flavors.

From around mid-March to the end of April, you can see the amazing peach blossoms spreading their beautiful pink and lilac flowers across the area, lining the riverbanks and filling the alpine valleys. One of the most beautiful spring sights in China, the peach blossoms are a major part of Nyingchi culture.

Also known as the Brahmaputra Canyon, the Yarlung Tsangpo Grand Canyon is the largest and deepest canyon in the world, dwarfing the Grand Canyon in the United States. Stretching out along the course of the Yarlung Tsangpo River, which rises from western Tibet near Mount Kailash and later becomes the Brahmaputra, the canyon covers more than 500 kilometers of the river’s course. Starting at the small village of Zhibe, in Tibet, the deepest point of the canyon is around 6,009 meters deep, and where the massive Mount Namche Barwa rises up out of the plateau, the canyon has a depth of more than 5,000 meters to the river below. 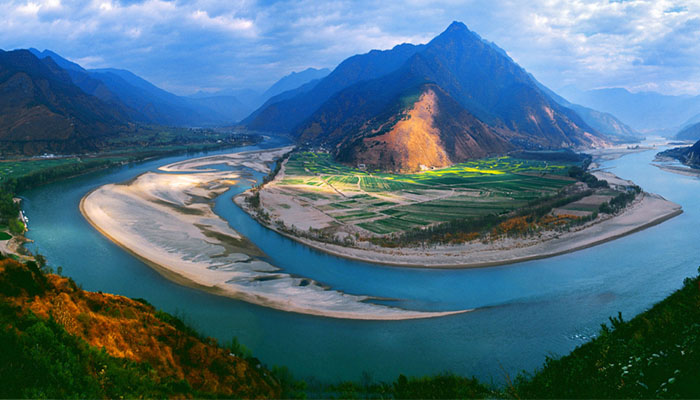 Yarlung Tsangpo Grand Canyon is the largest and deepest canyon in the world.

Opposite the Namche Barwa lies the mountain of Gyala Peri, and as the canyon passes between these two peaks, the river bends around to head back towards India to the southwest. The canyon has an average depth of around 2,268 meters, and the entire gorge has a very unique ecosystem, with much of its depth yet to be explored.

In Tibetan, Lulang means Loong Ling Valley, or “the place that will make you forget your home”. An alpine meadow of immense size in the Nyingchi Prefecture around 80km from Nyingchi County, the meadow is one of the most unique places in Tibet. Ancient primeval forests merge into wide grasslands at this high-altitude locations, and it is noted for being an amazing place from which to view the Namche Barwa Mountain. 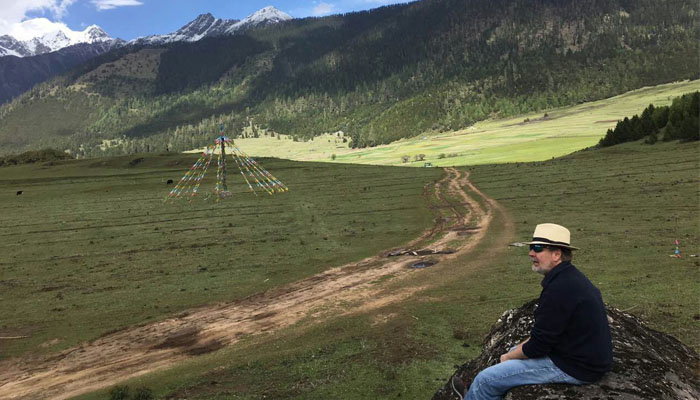 Lying at an altitude of around 3,700 meters, the plateau-mountain-meadow gives you a different view in every season, from snowy wonderland to fairytale landscapes, and in the summer fresh golden wheat shimmers in the fields. Stretching out for around 15km, yet only one kilometer wide, this beautiful location is renowned as a land where the gods live in scenic beauty, and the clouds rush past like galloping horses above the forests and mountains.

Known variously as Basum Tso, Basong Co, and Draktsum Tso, this beautiful lake is located in the Gongbo'gyamda County, more than 300 kilometers east of Lhasa. One of Nyingchi’s most famous tourist hotspots, the lake is renowned for its stunning beauty and the small Tibetan Buddhist monastery that lies on the small island close to shore. The lake lies in the mid to upper reaches of the Bar River, at an altitude of around 3,538 meters above sea level. Stretching out for 18 kilometers, and around 1.5km wide, this is far from Tibet’s largest lake, but it is one of the most beautiful. 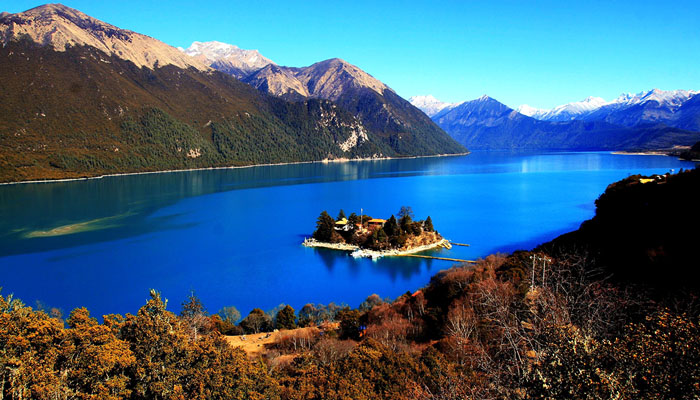 Basum Lake is one of the greatest sights in Nyingchi Tibet.

Just a short distance from the southern shores of the lake lies the small Tashi Island, said to be a hollow land that floats on the waters of the lake. The island is the location of the Tso Zonggongba Monastery, one of the most important monasteries of the Nyingma tradition of Tibetan Buddhism, from the 17th century. The lamasery in the monastery is said to contain a unique Qamda Buddha, as well as statues of Avalokiteshvara and her servants, the Golden Boy and the Jade Girl.

Noted to be one of the six most beautiful glaciers in China, the Midui Glacier in Nyingchi lies in the Yupu Township, in Bomi County, close by the famous Sichuan Tibet Highway. Famed for its giant ice basin and the unusual co-existence with lush forests, lakes, and small villages, it is a pilgrimage destination for tourists from around the world.

The unusual features of this beautiful glacier are the giant ice cascade that stretches out for 700-800 meters from the front of the glacial tongue, there are frequent avalanches down the tongue of the glacier from the higher mountains above. Formed from the convergence of two massive ice falls more than 6,800 meters above sea level, the ice cliffs of the Midui Glacier are one of the world’s most spectacular sights.

No visit to Nyingchi is complete without tasting the classic dishes of the region. And one of the most popular is the famous Stone Pot Chicken. More of a chicken soup than a pot-roasted chicken, this particular dish is one of the most delicious and nutritious in Nyingchi. The chicken is cooked in a traditional stone pot with ginseng, Dangshen, conic gymnadenia tuber, radix-polygoni multiflori, angelica, Tibetan caladium, yam slices, rhizoma gastrodiae, coix seed, lily root, ginger, pepper, red dates, medlar and a variety of other spices. The dish also only uses the local Tibetan chickens. 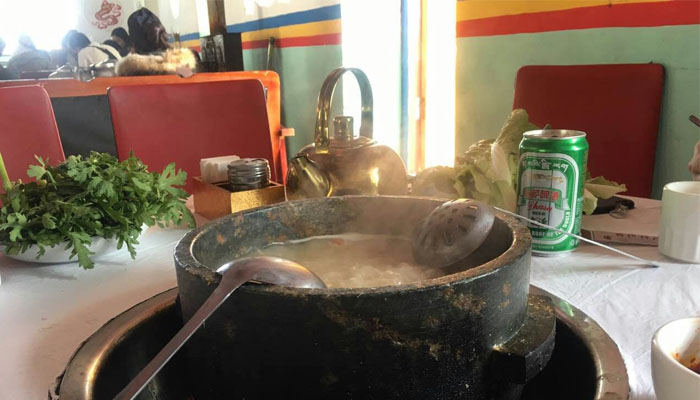 One can also go to taste the delicious Stone Pot Chicken in Nyingchi.

The thing that makes the dish even more special is the fact that the pots are not just any clay fired pot. All pots used for this dish are made from a single piece of naturally-occurring steatite, which is carved from the cliffside along the banks of the Yarlung Tsangpo River, and is found only in one place. The rock for the pot can only be collected in July or August, so these stone pots are quite rare.

Also known as Pygmy Pig, the Zangxiang Pig dish is a specialty of the area. An unusual breed of pig that lives at altitudes above 3,000 meters, these small pigs relish the taste of the Tibetan plants such as cordyceps sinensis, local ginseng fruits, and the plateau mushrooms. Reared in a completely natural environment, the pork from these pygmy pigs is extra tender, with low fat content and fine flavor. Often made into sausages or roasted and sliced, it is not uncommon to see the whole pig roasting on a spit.

If you are thinking of planning a tour that includes Nyingchi for your next trip to Tibet, then our classic 8-day Tibet and Nyingchi tour, with Lake Namtso, is the best choice for most travelers.

Starting with the classic tour of Lhasa, you will enjoy the sightseeing around the capital, before heading north to visit the famous Heavenly Lake, Lake Namtso. After staying overnight to view the stars and the Milky Way, you head back to Lhasa to prepare for the trip east. The trip in Nyingchi not only takes you to popular places, such as Basum Tso and the Mila Mountain Tunnel, but you will also get to see the Giant Cypress Nature Reserve, with its 3,500 year old trees, and the famed Lulang Forest.

While Nyingchi may not be as popular as the trips to Mount Everest and Lhasa, this beautiful part of the plateau is one area that is well worth the effort to visit. The trip to Nyingchi is a mere 5-hour drive, and you will get to visit some of Tibet’s most beautiful destinations and attractions. And if you really want to explore this region of the plateau more, take the trip from Chengdu and drive through the whole prefecture.

Be the First One to Comment "What Are the Top Experiences to Expect for Touring Nyingchi in Tibet?"