How to Plan a Trip to Nyingchi in Tibet?

Nestled between the mighty Himalayas and the Nyenchen Tanglha Mountains in southeast Tibet, Nyingchi is one of the most beautiful places on the planet. Also known as Linzhi or Nyintri, this amazing land is one of the most outstanding destinations in China, and is often called the Swiss Alps of China.

The lowest altitude area of the region on average, Nyingchi altitudes range from as low as 900 meters to as high as 7,782 meters, at the highest peak of the Himalayas in the prefecture. Filled with wondrous sights that include the Yarlung Tsangpo Grand Canyon, the giant 50-meter cypress trees, and the amazing Lulang Forest, few places on earth are blessed with such intense and spectacular beauty as Nyingchi.

How to Plan Your Nyingchi Tour?

Planning a tour of Nyingchi is something that requires some careful consideration, as there are a number of factors that you need to account for in your planning. Nyingchi is one of the less-visited areas of Tibet, and as such, can be an amazing option for a tour of the lower reaches of the Tibetan plateau within the Tibet Autonomous Region (TAR). So, here are a few tips on the planning of your lifetime trip to the beautiful Swiss Alps region of China. 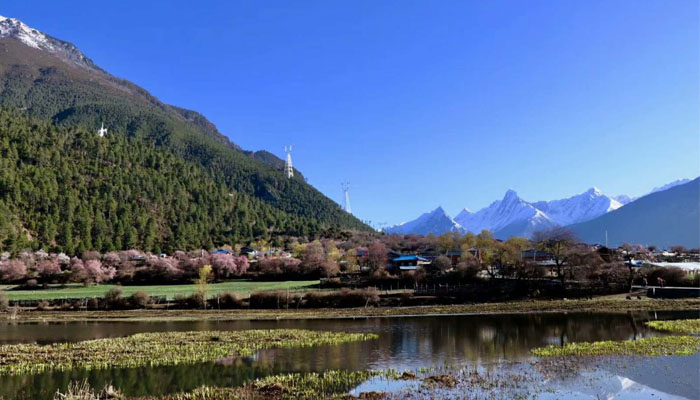 Knowing when to travel is important, especially when it comes to Tibet. Nyingchi may not have the higher altitudes of the rest of the plateau, on average, but it does have its moments, and plenty of high places to visit.

The climate of the area is heavily influenced by the terrain along the Yarlung Tsangpo River, which makes it rather mild in comparison to the rest of the plateau. It also makes it much more humid, with heavier rains in the monsoon season. Conversely, it also means milder winters.

Nyingchi is a place that can easily be visited all year round, with the right preparation. June to September is the summer monsoon season in Nyingchi, and it is a time when the rains can be heavy, with long downpours throughout the summer. However, while the rains can average as much as 120mm a month, with the wettest months being in June and July, it is still a great time to visit. Temperatures can reach up to 22 degrees in the daytime, and only dropping to around 10-11 degrees at night. Rains also come mostly in the late afternoons and evenings, so there are plenty of sunny days to spend sightseeing. 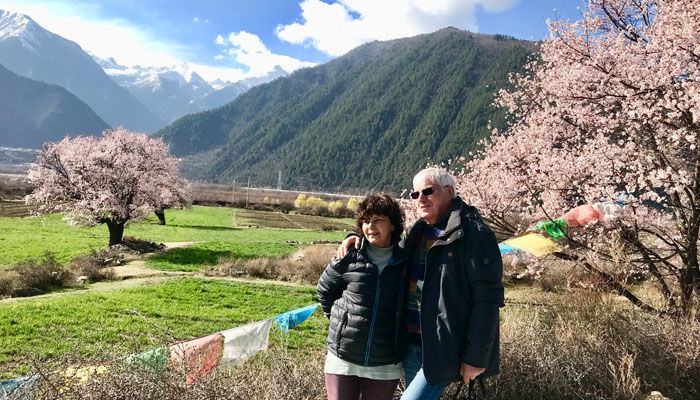 You can visit Nyingchi all year round.

Winter is not as cold as in the neighboring Lhasa Prefecture, though it can still get to below freezing in some places at night. Average temperatures from December to February range from 1-4 degrees, with highs of up to 8-9 degrees. Nights are colder, sometimes getting as low as -5 degrees, but warm sweaters can easily counter that. And with winter being the low season for tourism in Tibet, it can be a pleasant time to experience the winter beauty of Nyingchi.

Spring and autumn are the most recommended times to travel to Nyingchi, for both the milder weather and the stunning beauty. Spring, from March to May, is a pleasant time of year, with only a little rain and plenty of bright sunny weather. Spring is generally warmer, with nights no longer dropping below freezing, and high temperatures reaching up as high as 19 degrees during the day in May. Autumn, from September to November, is a similar season, in terms of weather, with the highs in September reaching around 20 degrees, dropping to only around 13 degrees by November. And while November nights may be getting down to below freezing again, the rest of the season has mild nights of 4-8 degrees. September does have more rain, which tails off into October, making it a much drier and lusher landscape once more.

Overall, the best time to travel to Nyingchi depends on what you want to see and experience, your personal preferences or requirements of when to travel, and your budget. You can easily choose the perfect time for yourself.

How you get to Nyingchi is an important step in your planning, and you have two main ways to travel to this lowland region of Tibet. The first, and fastest, is to fly there. Flights run to Nyingchi’s Mainling Airport daily from such popular airports as Chengdu, Chongqing, Xi’an, Guangzhou, and many more. The flights from Chengdu are by far the most popular, as it is a major transport hub in Southwest China and is closest to Nyingchi. 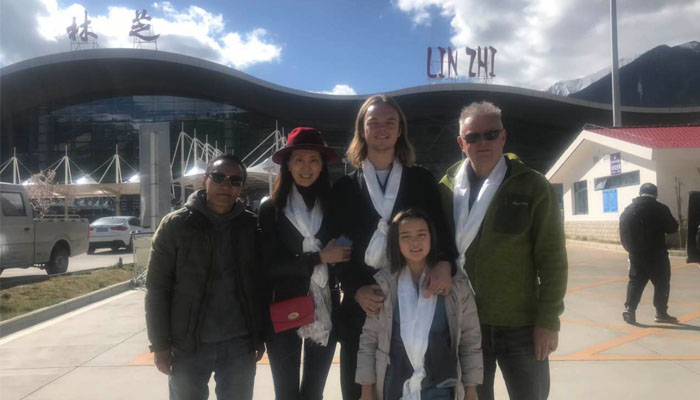 You can also travel overland to Nyingchi by car, choosing to depart from either end of the Sichuan Tibet Highway. The route from Lhasa to Nyingchi is now a lot faster thanks to the High-Grade Superhighway that runs from the Tibetan capital to Nyingchi, cutting the travel time down drastically. Heading through tunnels instead of over mountain passes, this awesome route gives you the chance to get to Nyingchi from Lhasa in a single day, with plenty of time to spare for sightseeing.

The other road route is to travel overland from Chengdu in Sichuan Province, the other end of the Sichuan Tibet Highway. A distance of almost 2,000 kilometers, this journey does take a lot longer, but has some amazing scenic views along the way.

Nyingchi, as with most areas of Tibet, has a range of hotels available, though you will not find the luxury five-star hotels that you can see in Lhasa city. Finding a suitable hotel for your trip to the region is not very hard, and you have enough choice to be able to choose the best option for you. Hotels range from good four-star hotels such as the Chongqing Cygnet Hotel and the Nyingchi Shangbala Hotel, to the three-star hotels of the Fujian Hotel and the Nyingchi Shanshui Hotel.

Other, cheaper accommodation is available for tourists to Nyingchi, and you can find a long list of guesthouses and hostels to stay in all across the area. With hundreds of options for hotels in Nyingchi, you have a great choice of where to stay, and can even find smaller cheaper Youth Hostels in some of the towns in the area, such as the International Youth Hostel in Bayi Town, opposite the People's Insurance Company on Bayi Avenue.

Choosing what to see in Nyingchi is one of the hardest parts of the planning, since there are so many great things to see that you will be stuck for which to include and which not to. If you are planning a trip in the spring, you should always include the peach blossom festivals, which can be found in several areas across Nyingchi.

Mount Namche Barwa is the highest mountain in Nyingchi, and sits at the entrance to the Yarlung Tsangpo Grand Canyon, the largest canyon in the world. One of the most beautiful places in China, this amazing mountain and the canyon itself make a great combined excursion in Nyingchi. 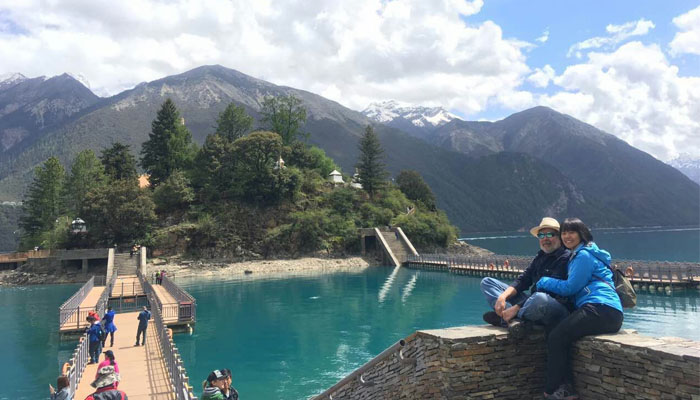 Lake Draksum-Tso is one of the most famous scenic spots in Nyingchi, with its tiny island and beautiful temple. Azure waters shimmer in the sunlight, and show a perfect reflection of the surrounding mountains, their slopes covered in pine forests. The Lulang Forest nearby is also a great place to stop. A highland meadow with a variety of features, this is considered to be one of the fairyland locations in Nyingchi.

And no trip to Nyingchi is complete without a visit to the oldest cypress tree in the world, known as the World King Cypress. Standing more than 50 meters tall, it is believed to be more than 3,000 years old, and pre-dates even the ancient Bon religion of Tibet. This massive tree has seen the birth of Bonism, Buddhism, Islam, and Christianity, and is still growing. 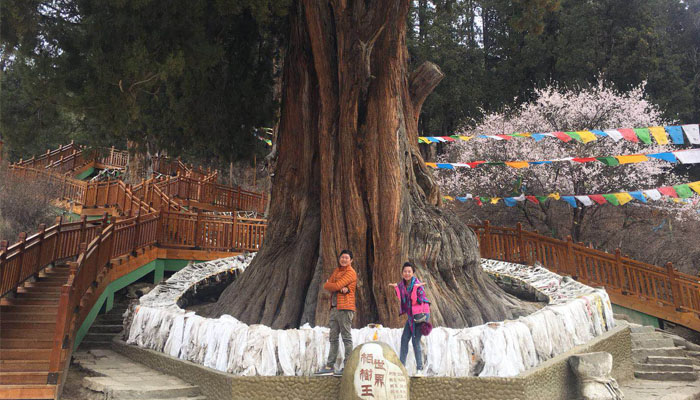 Visit the oldest cypress tree in the world.

If you are looking for the best tours of the Nyingchi area, then you could not do better than our amazing combined Nyingchi tours, which include other areas of Tibet as part of the overall tour.

Our popular Eastern Tibet Loop Tour takes you on a scenic route through eastern Tibet, showing you the dramatic scenery that is found only in eastern Tibet. Starting in Lhasa, the route takes you through Nyingchi, including Draksum-Tso and the Lamaling Temple, and on to Ranwu Lake. From there, you head northwest up into Chamdo, another Prefecture of Tibet, and the Jampaling Monastery, among other amazing sights. Then it is n into Nagqu, Tibet’s northernmost prefecture and the largest of all seven. Passing the famous Riwoche Temple, and several other local monasteries, you then head down to stop at the amazing Heavenly Lake Namtso, before finishing the trip in Lhasa once again.

If you are into photography, we have an amazing tour that takes you along the banks of the Yarlung Tsangpo River, in a loop through Nyingchi, Shannan (Lhoka), and Shigatse, before finishing in Lhasa. The tour includes such amazing sights as Draksum-Tso Lake, the famous Samye Monastery, and Lake Yamdrok, as well as stopping to visit the Gyantse Kumbum Stupa and the Tashilhunpo Monastery. You will also get to visit the outstanding sights of Lhasa, including the Potala Palace and the Jokhang Temple.

Planning a trip to Nyingchi, however, is not as hard as it may at first appear. Once you have decided on taking a trip, out professional tour consultants can help you decide where to go and what to see. And once you have booked your tour, we will handle all of the details, from hotels and accommodations to travel and transport, entrance to attractions, and all of your permits and passes for travel into and around Tibet. So, let’s get started planning your Swiss Alps trip to China in Nyingchi.