How to Travel from Xi’an to Tibet, by Flight or Train?

Xi'an, the starting point of the Silk Road, is the capital city of Shaanxi Province in central China. Tibet, on the other hand, is the world's highest plateau, encompassing valleys edged by the Himalayan Mountains.

Both the city and the autonomous region are exceptional destinations to visit. Xi'an used to accommodate several Chinese royal dynasties, while Tibet spent centuries in isolation, developing its recognizable culture.

You can travel from Xi'an to Tibet and vice versa by plane or train. In this article, we elaborate on the pros and cons of both transport options, to help you decide your way to travel from Xi’an to Tibet.

Option One: Travel from Xi’an to Tibet by Train

If traveling from the capital of the Shaanxi Province to the principal Tibetan city by railway, you need to know the following:

Trains depart from Xi'an to Lhasa, Tibet, two times a day. The first train starts the journey at 9:45 am, while the second follows shortly, at 11:22 am. However, the journey time of the former Xian to Lhasa train is about 31 hours, while the latter needs 32 hours to cover the distance between two cities.

For the details of the journey from Xi'an, Shaanxi Province, to Lhasa, Tibet, refer to the following tables:

Things to Expect When Traveling by the Railway

Getting from Xi'an to Lhasa by railway brings various benefits (and a few downsides) to travelers who opt for this means of transport instead of the airplane.

a. Experience the scenic Qinghai-Tibet Railway

First, the train reveals magnificent scenery along the Qinghai-Tibet railway, including some of the most beautiful expanses of Tibet. Besides enormous mountains and high peaks, such as Tanggula and Yuzhu, you may even catch a glimpse of herds of wild animals. 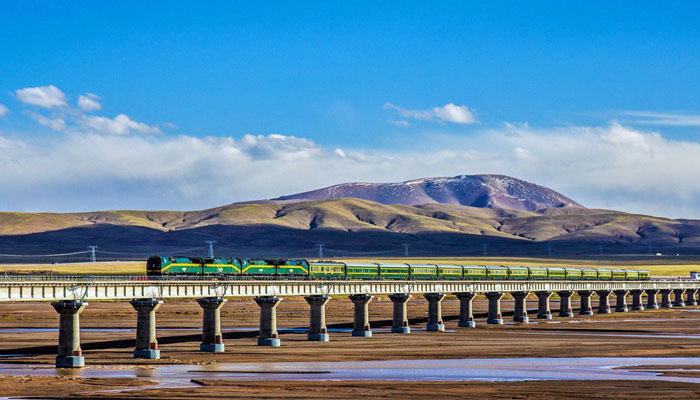 Qinghai-Tibet Railway will take you to see beautiful view on Tibetan plateau.

The second benefit of traveling by train on this route is the budget. The price of the hard sleeper, which we would consider a budget option, is ¥612 (Chinese Yuan). That amount corresponds to $88 (US) at the time of this article's writing (early February 2020).

If you wish to enjoy bigger comfort along with a few other perks, you can choose the soft sleeper. The price of this berth is 970¥, which is nearly $140.

So, you save a substantial amount of money by choosing the railway over the airplane.

Another key advantage of the train journey between Xi'an and Lhasa is adjusting to the altitude difference. The Shaanxi Province's capital sits at the elevation where oxygen is abundant (405m/1,330ft), while the chief Tibetan city (the 3,660m/12,000ft height) features far less oxygen. 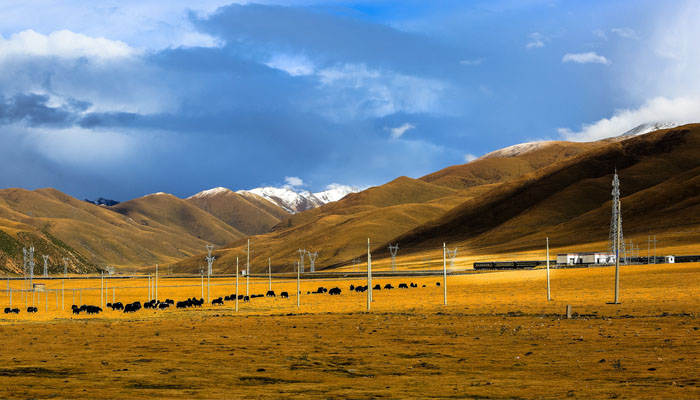 The Tibet train can help one to adjust to the high altitude gradually.

To adapt to the thinner air, you can stay a few days in Xining (2,275m/7,465ft), the principal city of the Qinghai province. Xining lies at the elevation where the oxygen level starts to decrease.

Even if you choose to travel to Lhasa directly, China-Tibet trains feature the oxygen supply system.

Since you will be traveling long to one of the world's highest capitals, you will have a lot of time to spend onboard the train. So, bring a laptop to keep yourself occupied with films, music, or games.

Also, having a book or cards would be handy. If you book a soft-sleeper and understand Chinese, you can watch the onboard TV, which broadcasts local channels.

Option Two: Travel from Xi’an to Tibet by Flight

Flying from the capital city of Shaanxi Province to Lhasa, Tibet, has substantial advantages, but also drawbacks, which you shouldn't take lightly.

Flight Schedule from Xi’an to Lhasa

Flying between the two destinations typically takes around 3 to 4 hours. Even if you add the time you need for transfers and airport procedures, it is obvious that traveling times by airplane are significantly shorter compared to the train journey.

There are several flights available on this route daily. Four departures are available seven days a week, while an additional airplane takes off on Sunday and Monday. For further details, please take a look at the following table:

What to Expect When Flying

Before you book a flight from Xi'an to Lhasa, Tibet, you should consider the following:

Airlines offer you several departures a day, from early morning to late evening. If you remember, trains depart from the capital of Shaanxi Province two times a day, both of which are available before midday. Therefore, traveling by airplane grants you better flexibility.

By choosing a flight, which features far shorter traveling times compared to the train, you have more time to enjoy the destinations. Instead of traveling nearly a day and a half, you can use this time to acquaint yourself with Lhasa and Xi'an better. Thankfully, both cities have an abundance of places you shouldn't miss.

While in Xi'an, visit the Terracotta Army commissioned by Qin Shi Huang, the first emperor of China, the city fortifications, pagodas, towers, and more. In Lhasa, use the extra time to explore Potala Palace, Jokhang Temple, and other highlights more thoroughly. Moreover, you can take a day trip to scenic and sacred lakes of Tibet - Yamdrok or Namtso. 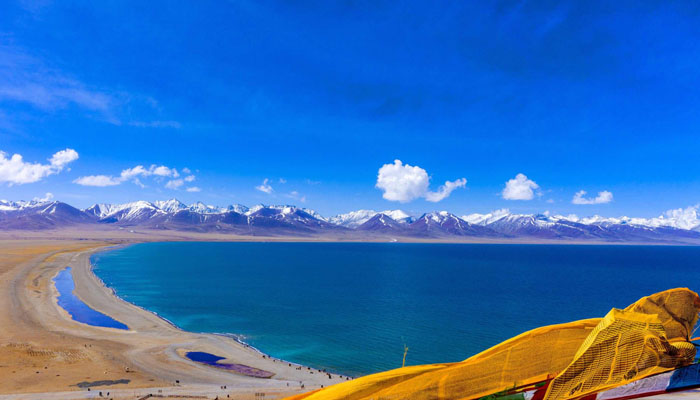 You can have a visit to Namsto with the time saved by taking the flight.

Flight fares from Xi'an, Shaanxi Province, to the Tibetan capital, are usually exorbitant. The average flight fare on this route is around ¥4,670, which is a bit over $670. In general, the cost of the direct flight from Xi'an to Lhasa seldom gets significantly lower.

Since low price fluctuations indicate the high demand, make sure to book your tickets well in advance.

Although listed last, this is the first factor you should think about before securing an airline over the train ticket.

In the first part of the article, we have mentioned that Xi'an sits at the 405m/1,330ft height, while Lhasa is 3,660m/12,000ft above sea level. As a consequence, the final destination features far less oxygen in the air than the outbound destination.

Tibettour.org is a tour operator specializing in trips to Tibet, the world's highest plateau and the doorstep to Mount Everest. With substantial experience and great attention to detail, we make every trip to Tibet a lifetime experience for travelers who book with us.

Our professional and devoted team takes every detail into account. So, you will benefit from accommodation that suits your needs, suitable transport options, diet you prefer, and much more. Let us know what you expect from your Xi'an Tibet tour, and we will employ all our capacities to deliver to you just that. With tibettour.org, you will enjoy a worry-free and enriching journey.

The city of Xi'an and the autonomous region of Tibet should be mandatory stops for every tour of China. And, getting from one destination to the other is pretty straightforward. With direct flight and railway lines, travelers have the convenience of getting from the chief city of Shaanxi Province to the principal Tibetan city with ease.

In general, you should opt for the Qinghai-Tibet train if you travel on the budget, like long journeys, and are a fan of picturesque landscapes. If you don't mind high costs, stand sudden elevation changes well, or time is a limiting factor to you, maybe a flight would be a better option.

Read More about How to Travel from Xi’an to Tibet, by Flight or Train?

Be the First One to Comment "How to Travel from Xi’an to Tibet, by Flight or Train?"