Is There Any Place Worth Visiting before My Chongqing Tibet Tour?

One of only three Municipalities in China, Chongqing is a unique city that lies at the confluence of the Yangtze and Jialing Rivers in China’s Southwest region. One of China’s most-visited cities by international tourists, this amazing municipality has a wealth of attractions to visit. From the cultural and natural attractions of the Dazu Rock Carvings and the Ciqikou Ancient Town to the stunning views of the natural landscape of the Yangtze River, Chongqing is well worth visiting as part of a longer tour to include Tibet. However, if you are in the mood for more than this spectacular city has to offer, or just have some spare time to kill before heading for Tibet, then there are some great attractions to visit just a stone’s throw from Chongqing.

Take the High-speed Train to Chengdu for Sightseeing

One option for travelers in Chongqing with some time to spare is to take the high-speed train to nearby Chengdu for some Sichuan Sightseeing. Only 310 kilometers apart, the trip to Chengdu from Chongqing by high-speed train takes as little as 2 hours, each way. That means you could take the early train to Chengdu, and come back again late in the day, making the most of the whole day’s trip.

High-speed train from Chongqing to Chengdu

In total, there are more than 80 trains a day from Chongqing to Chengdu, all of which take between 1 hour 27 minutes and 2 hours 30 minutes to make the trip. The first train of the day departs from Chongqing West Station at around 7:55am, arriving in Chengdu by 9:34 am, a trip of just 1 hour 39 minutes. A second-class seat ticket on these bullet trains normally costs around 145 yuan, or about 20 US Dollars per person. 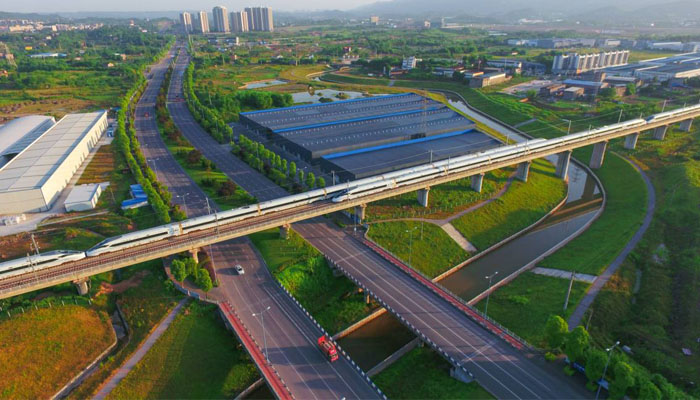 The return trip to Chongqing in the evening can be as late as 10:12pm, which takes around 1 hour 42 minutes to return you to Chongqing. For the trip, the G-trains are the faster trains, with the D-trains being only slightly slower by around 15 minutes. However, the D-class trains are a little cheaper too, so if you are not too bothered by a 15-20 minute difference, it can pay to take the d-trains, to save up to 6 dollars each way.

Giant Panda Base in Chengdu

One of the most amazing sights you can see in Chengdu is the awesome Chengdu Research Base of Giant Panda Breeding, which is located in the northwestern suburbs of the city. As well as being one of the best places to see these cuddly creatures in their natural environment, the center is ideal for a day out, as it is easy to spend an entire day wandering around the enclosures and visitor centers. 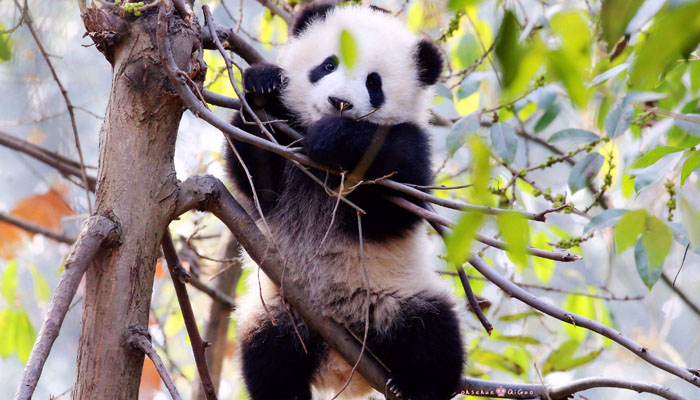 There are other panda research centers around Chengdu, but the closest lies more than 50km to the northwest. Known as the Chengdu Panda Base, the center in the city suburbs has been in operation since 1986, and you can choose to tour the center yourself or opt for a variety of guide services that can cost up to 97 dollars per person for a private tour. Group tours are much cheaper, and well worth joining.

If you have the time, Chongqing is the start of many of the Yangtze River Cruises that run daily along the longest river in Asia. Second in the world only to the Nile and the Amazon rivers, the Yangtze has a wealth of cruises available for explorers that can give you an amazing insight into some of the most beautiful locations in this part of China. 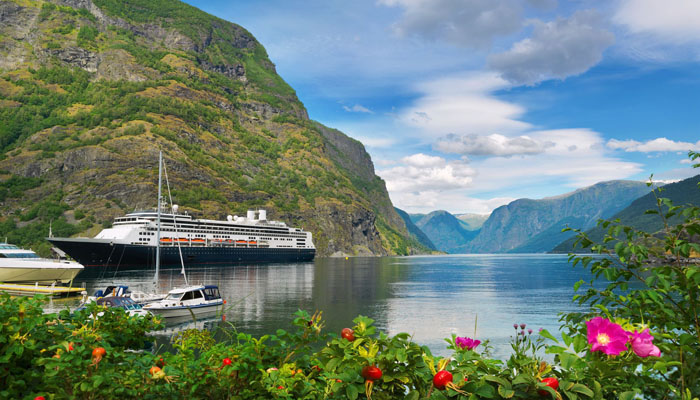 Take in the beauty of the amazing Three Gorges and explore the awesome Three Gorges Dam. Originally built to provide power to thousands of local communities, as well as reducing flooding in certain areas of the Yangtze River, this massive structure is open to the public and is one of the major symbols of Chinese industry and engineering.

The scenery along the course of the Yangtze River is some of the most beautiful in China, with natural landscapes and timeless historical attractions you can stop to visit along the route of the cruise. These stops often include such awesome places as the Fengdu Ghost City, the White Emperor City, the Shibaozhai Pagoda, and much more.

Located inside the borders of Wulong County of Chongqing, the Wulong Karst National Geology Park is a hidden wonder of the region that contains some of the world’s most outstanding limestone karst formations. Several natural wonders can be found within this national park, the most prominent of which are the Three Natural Bridges. Standing between 223 meters and 281 meters high, these three natural limestone bridges span the gorge at Tianlong Bridge (235m), Qinglong Bridge (281m), and Heilong Bridge (223m).

The park also contains many other natural formations, including the stunning Furong Caves, the famous Fairy Mountain, and the outstanding Longshuixia Gap. The Furong Cave lies on the banks of the Furong River, from which it gets its name, and was listed as one of the “Three Greatest Caves in the World” on the World Natural Heritage List. A huge limestone cave that covers an area of around 37,000 square meters, the cave is filled with a vast abundance of various natural rock formations, which shape the dazzling natural karst formations. 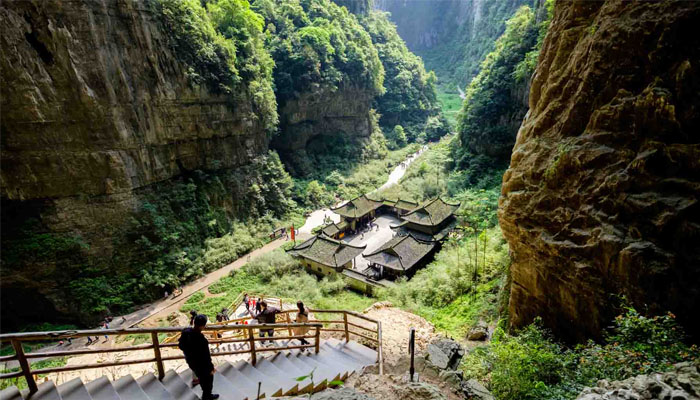 Wulong Karst Area is one of the filming locations for Transformers: Age of Extinction.

The Longshuixia Gap is a narrow style of gorge that stretches out for more than five kilometers, and drops down to more than 500 meters deep in parts. Shadowy and dark from the curved walls that almost meet at the top, the gorge is filled with primitive forests, waterfalls, and natural springs.

The Fairy Mountain, known in China as Xiannv Mountain (Xiannv means fairy), is a natural national forest park that has an average altitude of around 1,900 meters. The peak of the Fairy Mountain rises up to only 2,033 meters, but is a stunning mountain summit for its outstanding views of the sea of forests, the alpine meadows, and the local snowfield in the winter months.

For anyone with a love of natural scenery, Wulong County has some of the most amazing sights in the world. And it was one of the filming locations for the Hollywood movie, Transformers: Age of Extinction.

Customize Your Chongqing Tibet Tour with Us

If you are planning a tour to Chongqing and Tibet, then we can make your trip more personal by customizing it to suit your exact requirements. Our expert tour advisors can help you decide on the best places to visit in both Chongqing and the surrounding area and in Tibet once you arrive there, to give you the ultimate lifetime experience.

All you need to do is let us know what your preferences are, and we can suggest the best options for touring in both destinations, give you an idea of other places in both Chongqing and Tibet that you might not yet know about, and help you to organize the whole trip as one long tour.

All tours of Tibet are required to be done using a registered travel agency, which provides a tour guide, driver, private vehicle, and all the necessities of the trip, as well as all your permits and documents for entering and traveling in Tibet. And with our decades of experience and expertise in organizing tours in both Mainland China and the Tibet Autonomous Region, we can guarantee that your trip will be the best you have ever taken.

For anyone looking into taking a combined tour of Chongqing and Tibet, there are plenty of things to see and do in both places. From the stunning karst formations of Wulong County and the ability to take a cruise along Asia’s longest river to the heights of the Tibetan plateau and the wonder of the world’s highest mountain. And with Chongqing being one of the major gateway cities to Tibet from mainland China, this unique municipality in Southwest China is one of the perfect starting points for a tour to Tibet.

Read More about Is There Any Place Worth Visiting before My Chongqing Tibet Tour?

Be the First One to Comment "Is There Any Place Worth Visiting before My Chongqing Tibet Tour?"