Buddhist monastery is the primary seat for the preservation and inheritance of Tibetan culture. To completely immerse yourself into Tibet, a visit to Tibetan monastery is of essence. Interestingly enough, the monasteries in Tibet almost locates in mountains.

Why are Tibetan monasteries built on mountains and what are the top mountain monasteries to visit in Tibet? The answers to these questions are given below. Read on to figure them out and know the dos and don’ts while visiting monasteries in Tibet mountains.

Why Are Most Tibetan Monasteries Built on Mountains?

Tibet’s most monasteries are built on mountains and in remote areas. Why? The followings are several reasons that can explain.

Deities Are Believed to Reside on Mountains

Tibetans worship lofty mountains. They believe there are deities residing in these mountains. They also trust that the masters who have reached enlightenment will return back to the holy mountains to guide those who are still in their practice.

Therefore, monasteries built on mountains will be blessed by deities and monks studying in the monasteries will be better instructed by predecessors.

Monasteries in mountains are far away from human settlements. Pilgrims have to travel for long distances to get there. Challenges along the way are believed to be tests from the deities. Adversity makes one stronger; just as polishing makes jade finer.

Here come the top mountain monasteries to visit in Tibet. Getting to know some basic knowledge of them before you taking a Tibet tour is of matter.

Sitting on top of Marpo Ri, the “Red Hill”, Potala Palace rises over 300 meters above the ground floor. The grand palace is a 13-story building, very impressive. It’s the prior important mountain monastery in Tibet, both materially and spiritually. 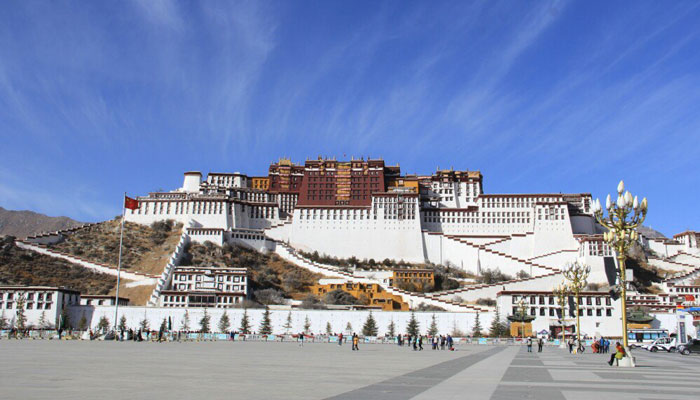 Potala Palace is the prior important mountain monastery in Tibet.

When walking into the Potala Palace, you are likely to visit a giant museum. Hundreds and thousands of murals and painted scrolls are whispering the stories of the successive Dalai Lamas. Tons of fine sculptures, porcelain, jade, gold and silver, as well as a large collection of Buddhist sutras are waiting to explore.

Tibetans regard the Potala Palace as an example of purification. Completing the climbing of the steep cliffs is a practice to overcome the desires. However, the climb is not easy. Due to the high altitude, it will take longer than you expect.

Drepung is the largest of all Tibetan mountain monasteries, located on the Gambo Utse mountain that is about 5 kilometers west from Lhasa. Today it serves as an influential Buddhist college for monks to study the classic Tibetan Buddhism.

As part of the ceremony of the Shoton Festival, Drepung Monastery attracts crowds of pilgrims and tourists to come every year. During the festival, a thangka over 100 meters high will be unveiled on a giant frame on the side of the hill behind the monastery. Thousands of Buddhists gather there to pray and throw hada onto the painting. It’s a great chance for you to experience the Tibetan Buddhism culture.

Ganden Monastery, together with Drepung and Sera, are the “great three” Gelug university monasteries of Tibet. Ganden Monastery seats at the top of Wangbur Mountain, around 40 kilometers northeast of Lhasa.

A trek around the monastery offers dramatic views over the valleys that surround it. Many visitors trek from Ganden to Samye Monastery which is the first Tibetan Buddhist monastery built in Tibet. It is one of Tibet’s most popular treks, not easy but quite rewarding. Covering a distance of 80 kilometers, you need 4 to 5 days to finish the trek. 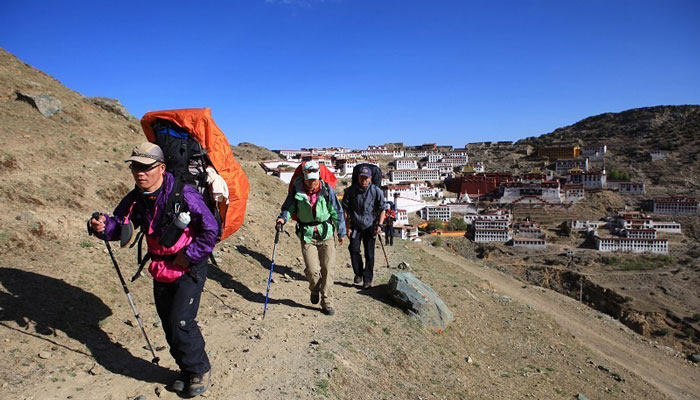 About 120 kilometers northeast of Lhasa, Drigung Til Monastery wind its way along the south slope of a long mountain ridge. From the main courtyard of the monastery, you have a 180-degree views of the serene valley.

Drigung Til Monastery is the holiest sky burial site in Lhasa region. Tibetans travel hundreds of kilometers to bring their deceased relatives here. Although tourists are forbidden to watch the sky burials, you can hike up the site when no ceremonies are taking place. If vultures are circling, don’t go up to the site.

Located on a hill in the center of Shigatse, the second largest city in Tibet, Tashilhunpo Monastery is the traditional residence of the Panchen Lama, the second most important spiritual leader of Tibet. 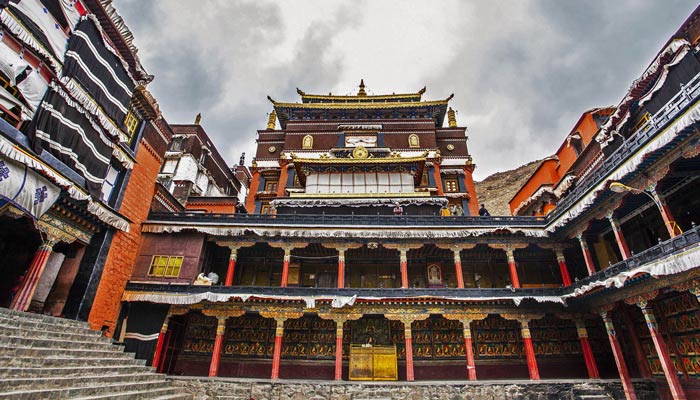 Tashilhunpo Monastery is the traditional residence of the Panchen Lama.

Here you can visit the Thangka Wall which is nine floors high. During festivals, the wall will be hung with huge and colorful thangkas. The monastery houses a massive golden statue of Maitreya, the Future Buddha, which is the largest gilded statue in the world.

From Lhasa to Shigatse, you can take a train on your own or travel with us by a private car.

Sakya Monastery is situated on a small hillside on the road to Tingri, about 160 kilometers to the southwest of Shigatse. The monastery exterior is spectacular, split by the Trum Chu river into two parts, one is one the hillside, and another is in the valley below. 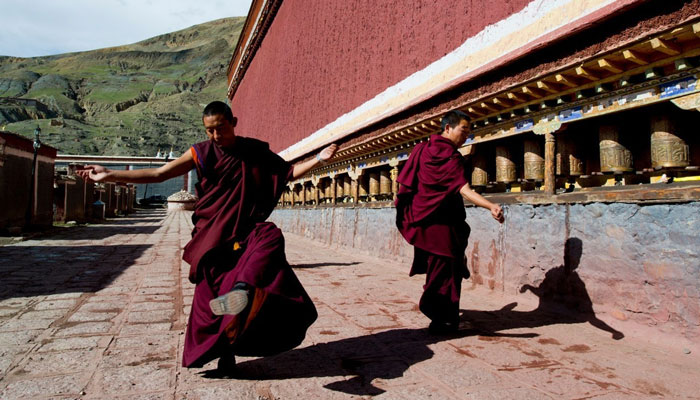 Sakya is a beautiful monastery situated on a small hillside on the road to Tingri.

There are a large number of treasures to see, including loads of thangka paintings, sacred statues, and the stupa that contains the remains of its founder, Khon Khonchong Gyalpo. A huge collection of more than 40,000 books are stored in the monastery’s library, most of them are Buddhist scriptures.

Lying at an altitude of 4,980 meters, Rongbuk Monastery is the highest monastery in the world. Close to the base of the northern slopes of Everest, the monastery is one of the best places to view the Mount Everest.

The monastery is accessible by by road after 2 to 3 hours of drive from the Friendship Highway. You can also trek to Tibet EBC from old Tingri, much more thrilling than taking the tourist buses. Rongbuk Monastery will be last station of this wonderful trekking.

Dos and Don’ts When You Visit Tibet Mountain Monastery

There are some attentions to know when you visit the monasteries in Tibet mountains.

1. Do remove hat, sunglasses, and keep silent - When you enter the rooms of Tibetan monasteries, please remove your hats and sunglasses to show your respects to deities. And switch your mobile phone to silent mode.

2. Do know the key gestures for Buddhist praying - Stand upright before the Buddha statue and then prostrate yourself. As you put your palms together, close your eyes and say prayers or “Om Mani Padme Hum” in Tibetan and gently move them from your forehead to face and chest and bow. 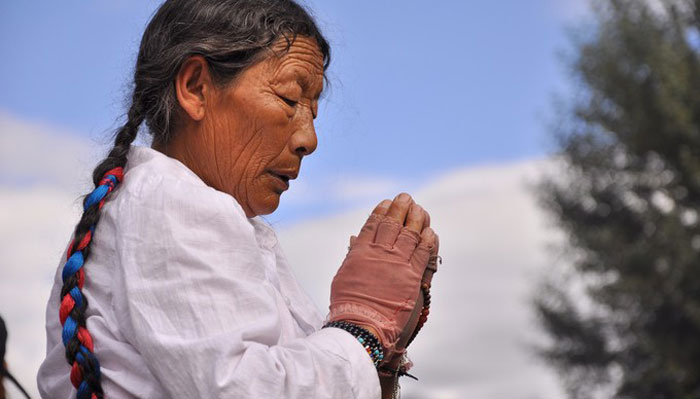 It is necessary to know how to pray before you take a Tibet tour.

Monastery tour is an important part when you visit Tibet. Now you know the top monasteries in Tibet mountains. In Lhasa and its around, take your time to worship the Potala Palace, Drepung Monastery, and Ganden Monastery. If curious about the mysterious sky burial in Tibet, you can pay a visit to Drigung Til Monastery.

In Shigatse, there is a grand Tashilhunpo Monastery to explore. Book lovers can head to Sakya Monastery, where a huge collection of over 40,000 Buddhist scriptures can be found. From Rongbuk Monastery, the highest monastery in the world, you can see the stunning views of the world’s highest mountain, Mount Everest.

Read More about Top Mountain Monasteries to Visit in Tibet